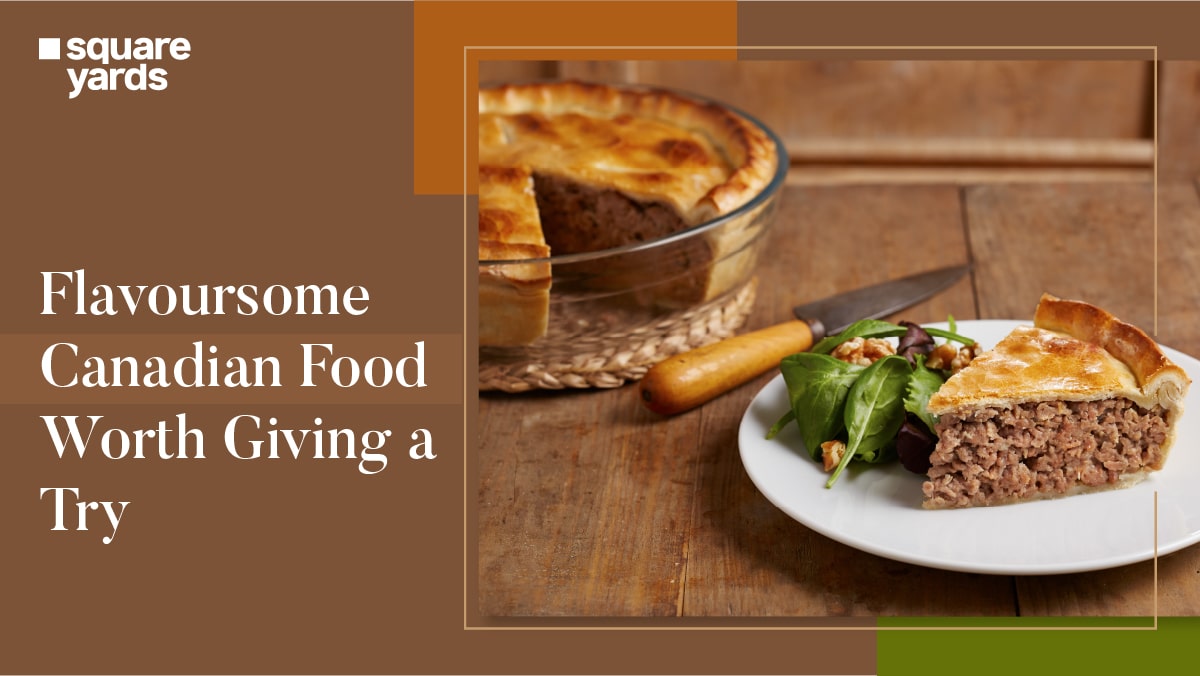 Only a few countries have created a global image in the world of mouth-watering cuisines, and Canada is one of them. If you belong to the category of individuals who lives to eat, then you are at the right place. In this blog, we will walk you through the Canadian food guide that features various flavoursome dishes from Canada that feature our proudly Canadian maple syrup in everything more! 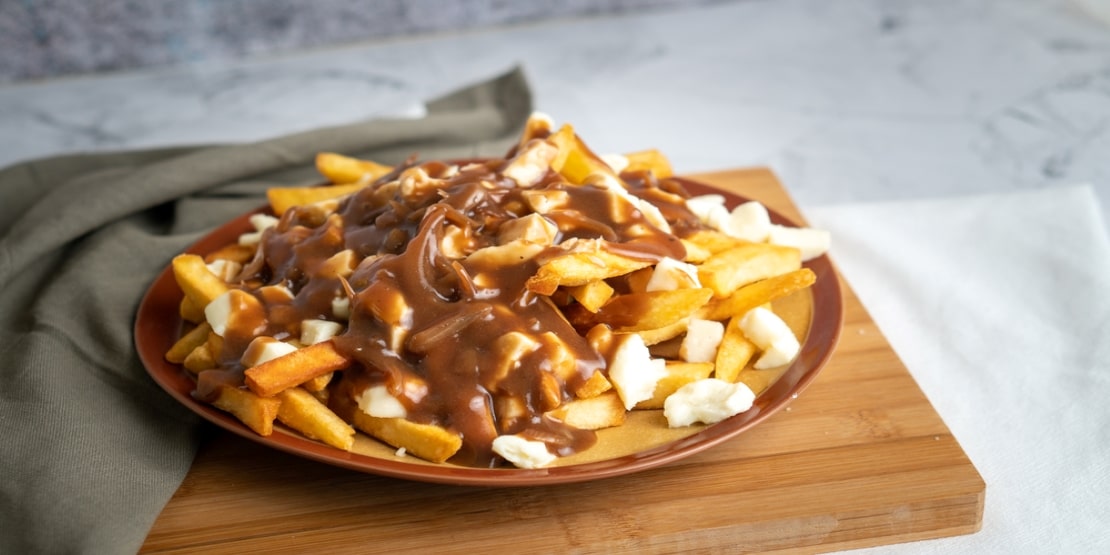 Poutine is one of the many culinary gems of French Canada. It has emerged as one of the traditional Canadian food, dating back to the 1950s. However, several towns in Quebec claim that they invented this celebratory dish. Poutine has squeaky curds on fries and meat-based gravy. How famous is this dish? Canada has an annual poutine festival that is celebrated across the country. If you’re up for a real celebration, you should attend and indulge openly!

Location for Indulgence: Any Canadian restaurant with fries on the menu will typically offer poutine. Even franchise restaurant chains like McDonald’s have it on their menu. 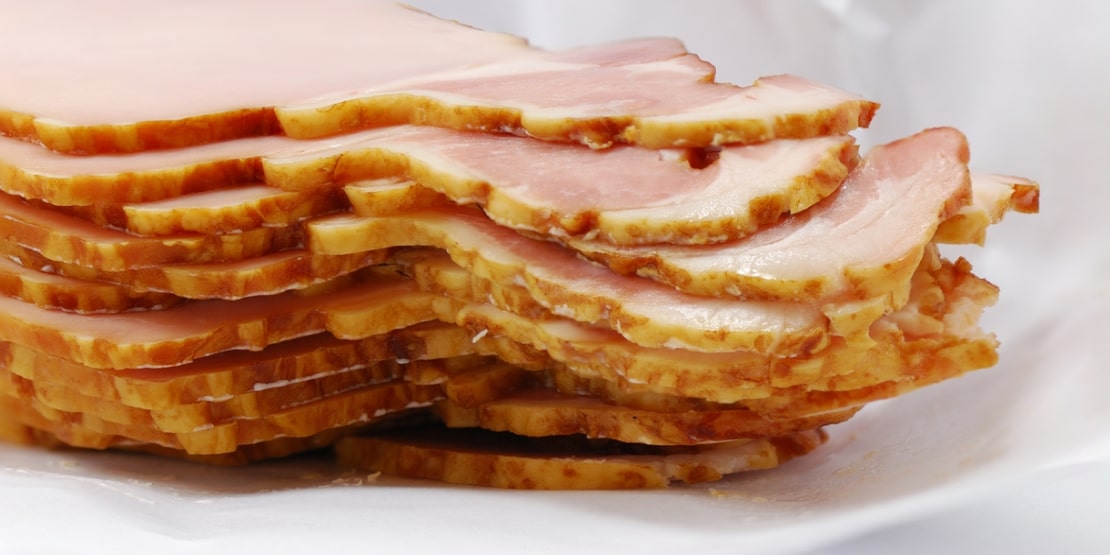 Canadian bacon is commonly known as ‘Peameal bacon.’ This famous dish was created by William Davies, a Canadian pork packer from England. The Canadian bacon got its name from Peammeal because it was originally rolled in ground yellow peas for shelf life extension. However, it is mostly rolled-in corn meal now. Toronto and Ontario are popular eating destinations for this dish. According to reports, Canada exported pork to England during the turn of the century due to a shortage. At that very time, it got rolled in yellow peas for preservation, which later switched to cornmeal. Unlike the traditional become which is extracted from a pig’s belly, the Canadian bacon is lean pork rolled and brined in cornmeal.

Location for Indulgence: Toronto is famous for its Canadian cuisine. Moreover, Toronto’s Carousel Bakery in Toronto’s St. Lawrence has made a global image for featuring this world-renowned Canadian dish. 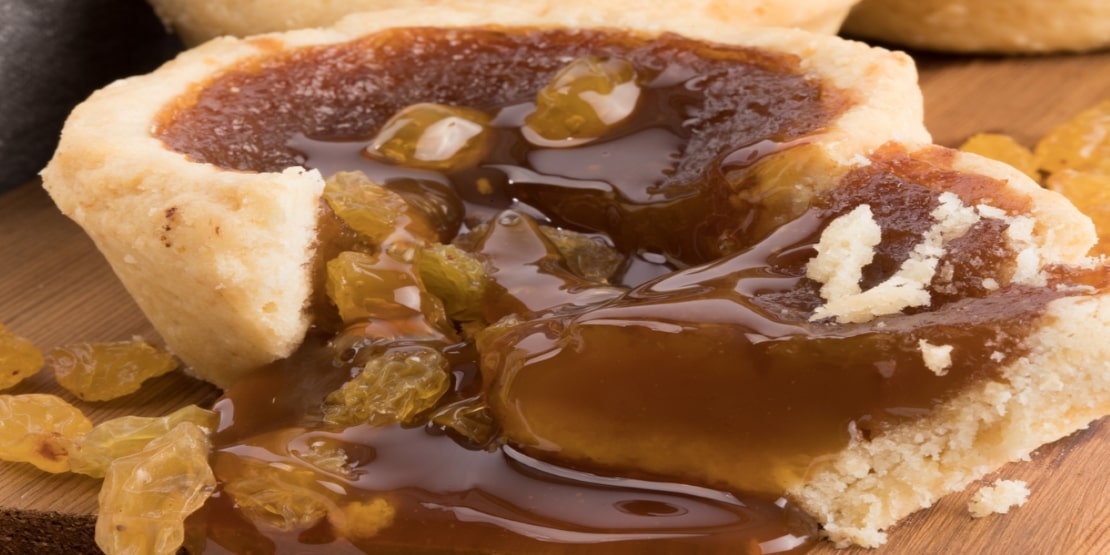 The Canadian butter tarts are known as the taste of time and the origins of the delectable and quintessentially Canadian dish. The recipe for the mouthwatering dish can be traced back to the 19th century. Butter tarts consist of crumbs with a creamy centre of sugar, egg mixture, and butter, of course! The raisins that get added are a matter of debate. These Butter Tarts are easy to find in the kitchens of many homes across the country. Moreover, the recipes are often passed from one generation to another.

Some fascinating facts about Butter Tarts:

Location for Indulgence: Mostly all bakeries and coffee shops feature this delightful dish on their menu. However, it is worth every penny to plan a trip to Ontario, which is the birthplace of Butter Tarts. The freshness and authenticity of Blue Tarts are incomparable. The Blue Tart Trail is an 18-bakery chain that sells a variety of tarts. Another place worth trying is the City of Karwartha Lakes, which offers a unique Butter Tart Tour. 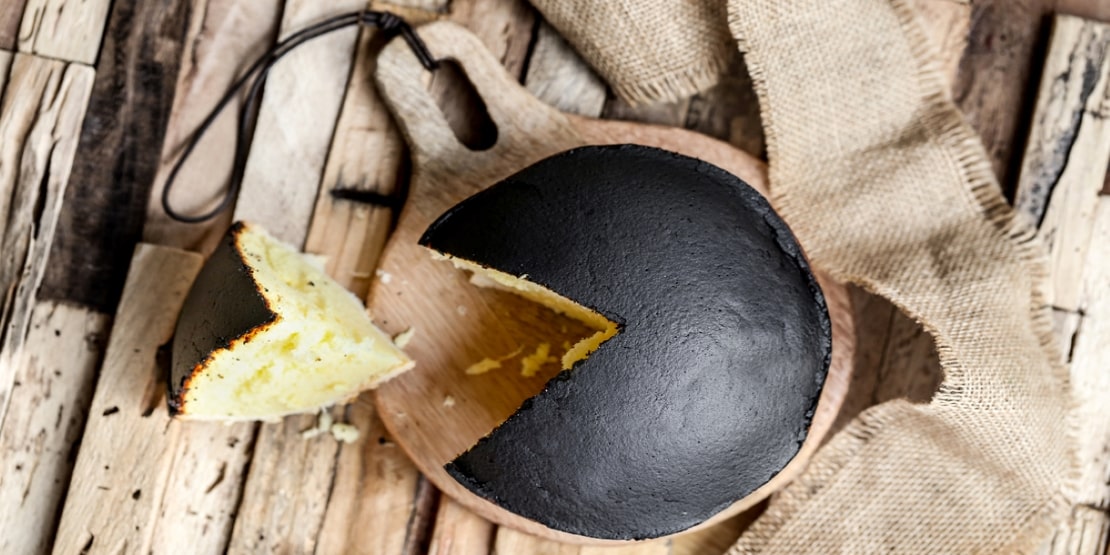 Tourtière is a deep-rooted French Canadian dish which is claimed to be dated back to the 1600s. An interesting fact – the vessels that are used to create this scrumptious dish share the same name. Moreover, there are numerous versions of the tourtière as various ingredients are used in the different geographical areas of Canada this practise makes it one of the best foods in Canada. Tourtière contains ground pork, beef, game or veal, and some herbs and species. In some coastal towns, individuals also use groundfish. Christmas and New Year are the most popular times for eating this meal. However, in grocery stores throughout Quebec, you will find Canadians devouring tourtière all year round.

Location for Indulgence: Aux Anciens Canadiens, situated in Quebec City, serves this toothsome Canadian food with love. This restaurant offers a unique culinary experience, which is worth the effort. 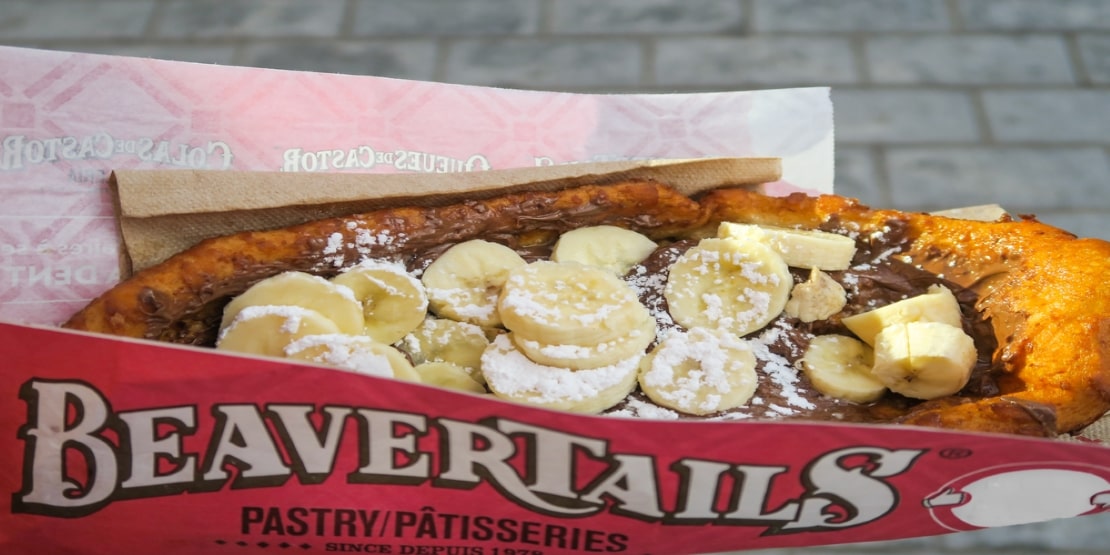 The BeaverTail is like a flat doughnut, but without a hole. Its recipe was handed down through the Graham Hooker family for generations. In the year 1978, it was introduced to a much larger audience. Just a year later, the first outlet of BeaverTails was opened in Ottawa with a variety of topping options such as nutella, sugar, and other sweets. The name refers to the dish’s resemblance to a beaver tail.

Location for Indulgence: Halifax’s Waterfront and Vancouver’s Grouse Mountain are some of the locations that offer BeaverTails. Not to forgot, BevearTails is also served with Canadian maple syrup. 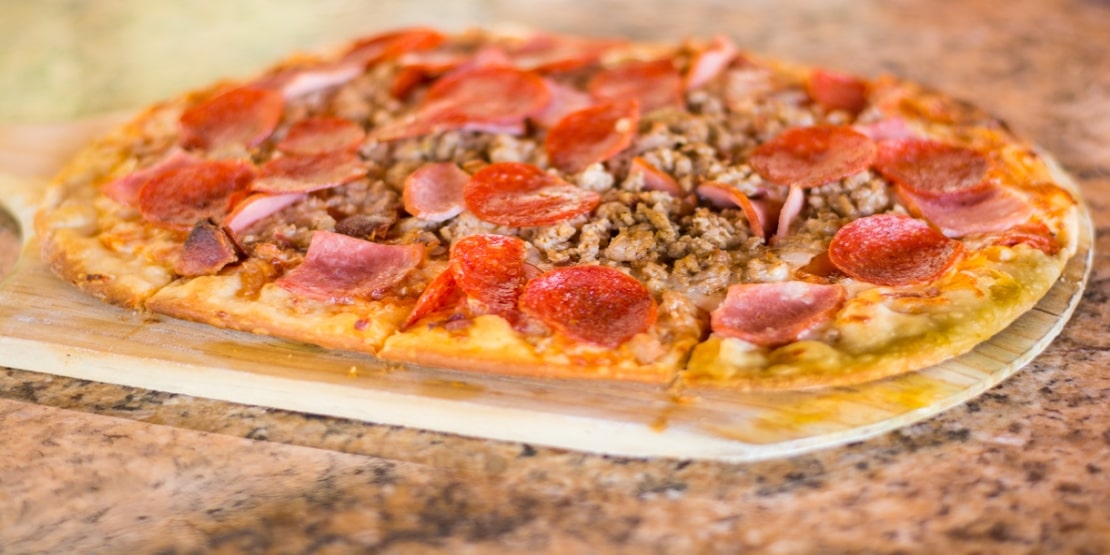 Yes, we know, we’re surprised too. A widely consumed Italian dish is on the list of popular Canadian foods! Canada claims fame for its Hawaiian pizza, containing cheese, pineapple, and ham. It was invented in Chatham, Ontario. Another pizza is the Ron Telsky Canadian Pizza. It is doughy and fried like an American-styled pizza. Other creative pizza flavours include Wayne Gretzky (Italian salami, feta cheddar cheese, mozzarella chorizo, chilli flakes), and Cronenberg Crash (tandoor tofu, peanuts, cilantro, caramelised onions, and red pepper). The famous maple syrup is one of the additional toppings.

Location for Indulgence: Ontario is one of the best places to enjoy these pizzas that offer a unique and authentic taste. 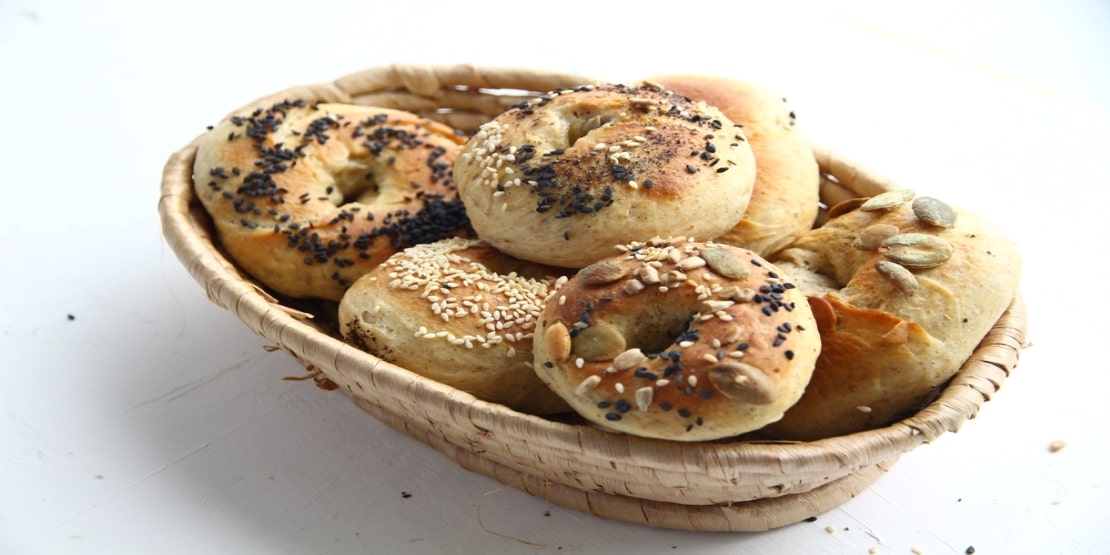 New York is not the only place that has a global reputation for making the tastiest bagels. The Montreal-style bagel is thinner, smaller, and denser than a typical bagel and even sweeter. It is due to the boiling factor in water with malt of honey just before the baking process. Their uniqueness lies in the wood-fired oven in which they are baked, giving them a crispier crust and makes them one of the best food in Canada.

The Canadian food industry is rich in tradition, as the recipes are handed down from generation to generation. It is maple syrup that makes Canada famous. It complements sweet dishes, pizza, tarts, and much more. These dishes are part of the daily diets of people living in the Great White North. The Canada food guide features the season’s flavours, and adds an extra layer of joy to the indulgence and makes the best food in Canada.

What is the best place for Canadian food?

What are the popular foods in Canada?

What can we have as street food near Niagra Fall?

You can visit the ‘Mother Cluckers’ - they offer the best Canadian street foods at reasonable prices.

Is Canadian food safe to eat?

Yes, Canadian food is as safe as any other food. They have a wide variety of dishes, from sweet to spice, and some sweets are also dipped in the Canadian maple syrup.

How do the vendors manage street food hygiene in Canada?

Several street food vendors do not take adequate care of hygiene, which may lead to many food-borne diseases. Vendors try to maintain hygiene by making food in fresh water and also cleaning the utensils regularly.

Shivam Singh Shivam Singh has a positive approach with keen observation skills. He is a journalist, athlete, and photographer who loves to seize the moment. He reads staggeringly to hold credibility in his writing before he initiates. Shivam is more into creative work because exploration and expression are the two things he truly desires. While not working, you can find him on a junket around the course. Writing in various genres makes him a complete package.
sticky-form