Top 10 Happening Festivals in Canada and Why They are Popular 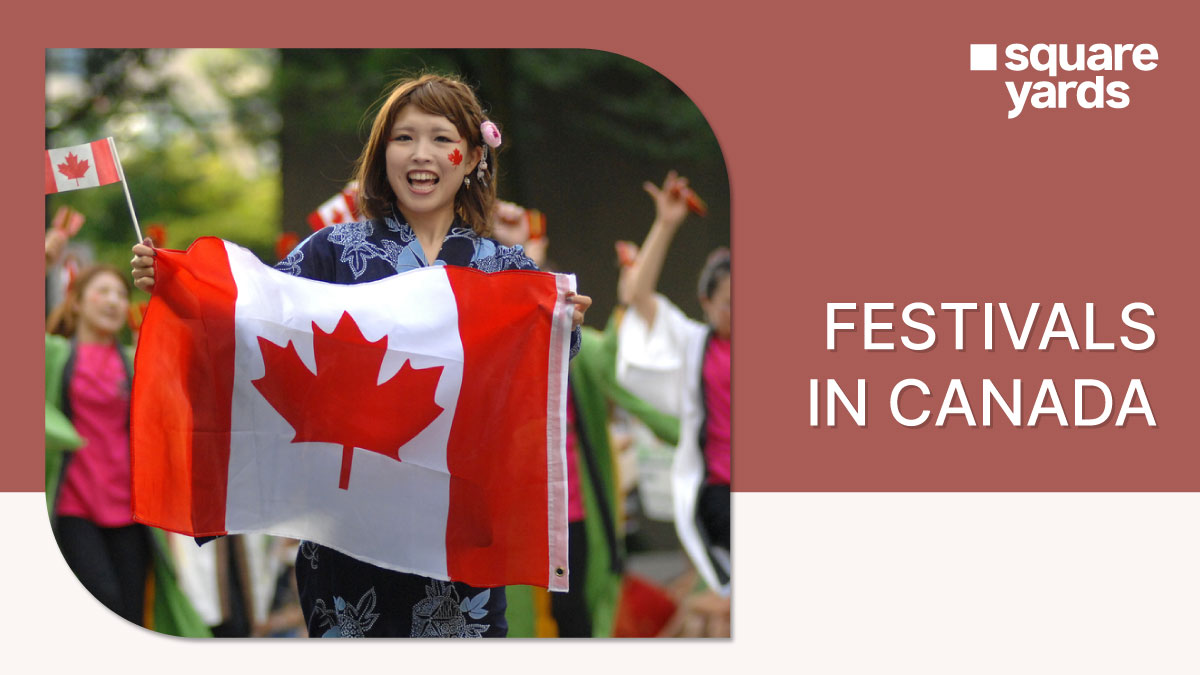 When asked about Canada, often the first thing that comes to people’s minds is the Canadian festivals. Canada is a diverse country that is rich in culture and traditions. Festivals in Canada are lively in which not only Canadians but also people from all across the globe indulge and celebrate with enthusiasm. Each part of Canada celebrates vigorous festivals, from the largest carnival in the world to the most bizarre and hilarious ones.

So, without further ado, let’s walk you through the top 10 Canadian festivals in this article. 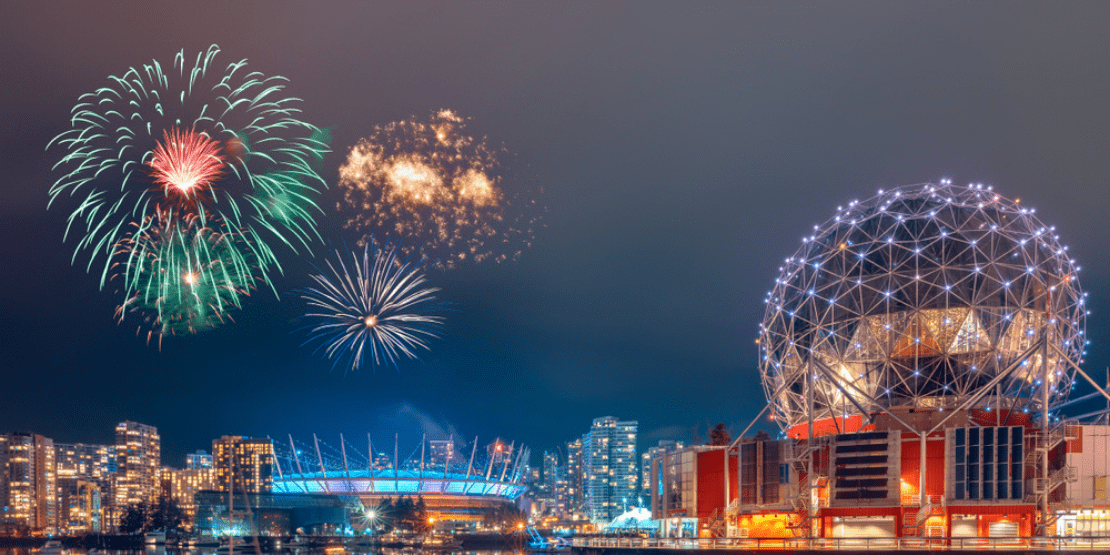 Here are the ten most celebrated festivals in Canada that you should know about to participate in and have a gala time during your stay. 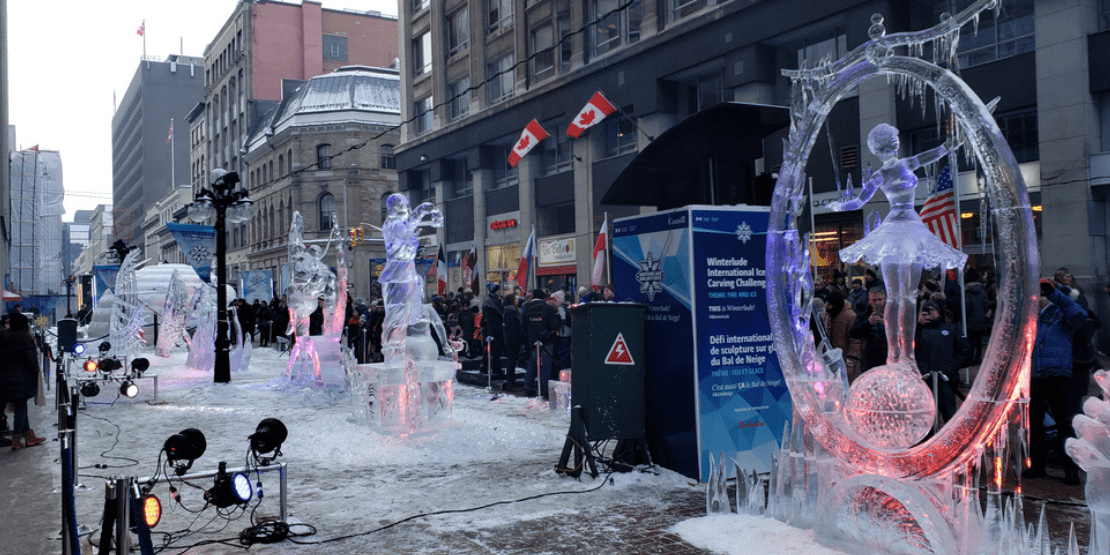 Canadians celebrate winters with full enthusiasm in Ottawa, the capital of the country. Winterlude is an epic annual festival celebrated on the first three weekends of February. During this time, the frozen Rideau Canal (UNESCO Heritage Site) becomes the largest ice skating rink in the world that attracts multiple natives and tourists alike.

You can also experience live music and entertainment at the American Express Snowball concert venue during this festival. Winterlude includes both indoor and outdoor activities as well that highlight the artistic, cultural and culinary traditions of Canada. This festival provides an opportunity to connect with your loved ones and make new connections. 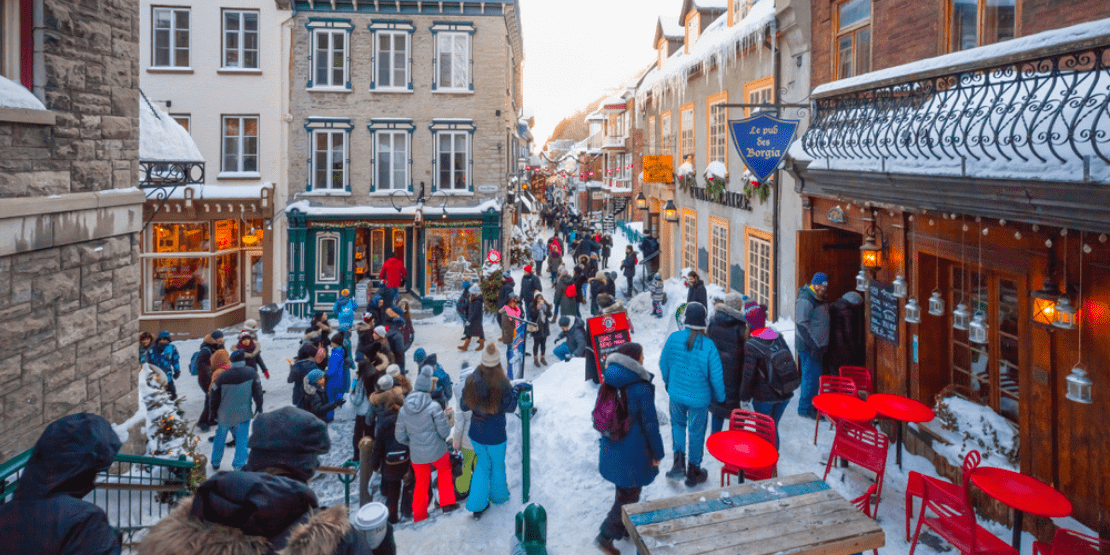 The Quebec Winter Carnival is known as the world’s largest winter festival held in Quebec City. Every year, numerous tourists visit the city to indulge in its multiple colourful and fun activities. However, this carnival is a week-long event, celebrated in February, that you don’t want to miss.

Numerous traditional activities are as follows:

People of different age groups come together on the snow-covered streets of Quebec City to enjoy the two nights of the parade featuring vibrant performances and the most loved snowman archetype of the carnival, Bonhomme.

Bonhomme is the snowman mascot of the Winter Carnival that symbolises happiness and fun. A gigantic Ice Palace is built for him that is the centre of attraction of this carnival. Both tourists and native people get excited to see Bonhomme’s Palace, which is a piece of art.

The Ice Canoe Race is the adventure sport of the winter carnival, where athletes have to cross through the frozen St. Lawrence River. More than 40 teams participate in four classes which are Elite Women’s, Elite Men’s, Competitive and Sports events. 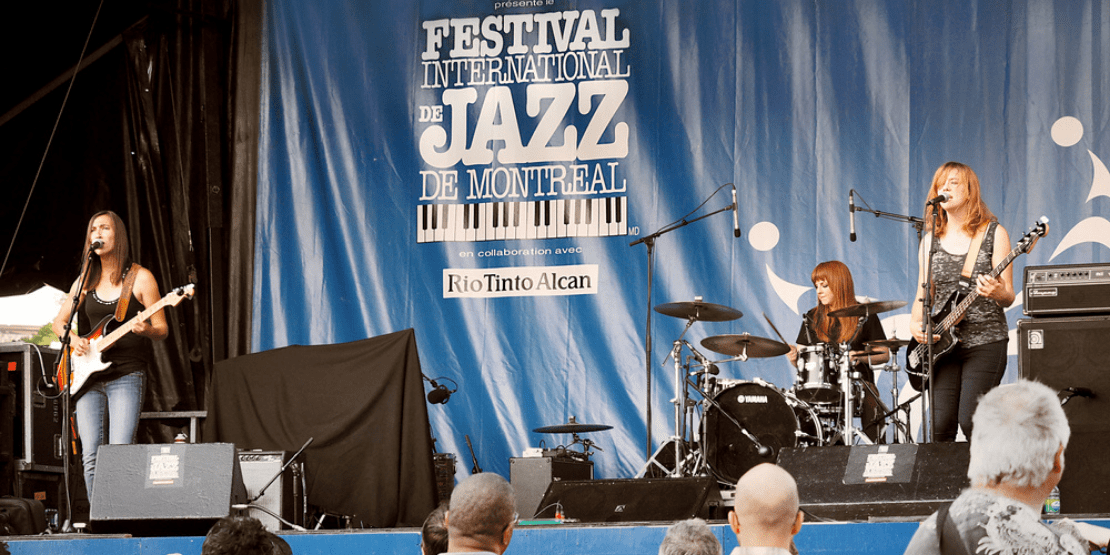 The Montreal International Jazz festival is one of the world’s largest jazz festivals that takes place in Montreal in June. You can witness around 500 concerts that host around 2000 musicians from all around the world.

About 75% of the concerts are free to access and do not charge any entry or ticket fee. At this festival, more than 2 million music lovers visit this place. However, along with jazz music, you can also experience other forms of music in this Canadian festival. 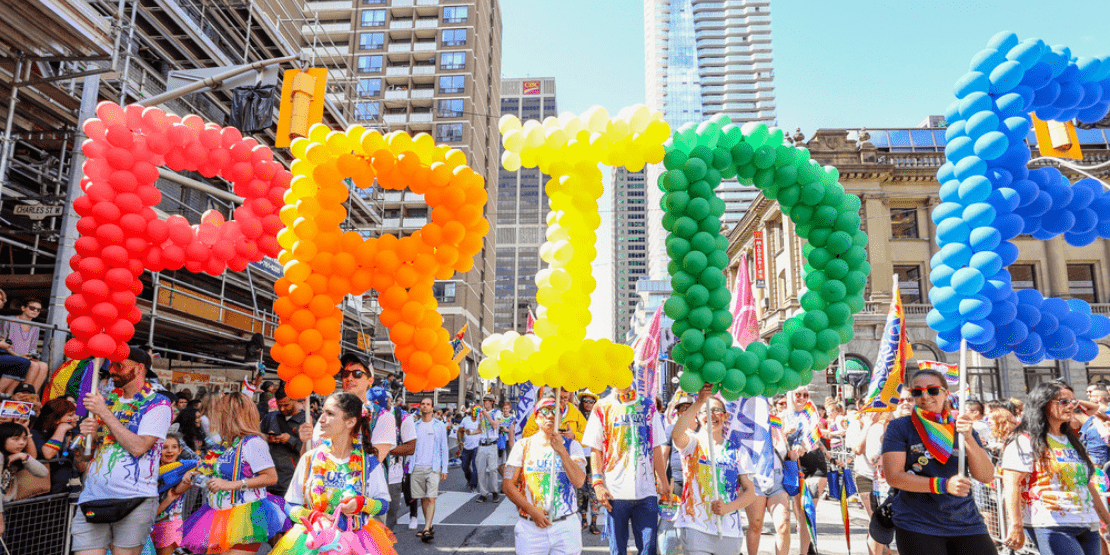 Pride Toronto festival is celebrated every June for the freedom and diversity of the LGBT community in Canada. This festival is the world’s largest gay festival that is 7 to 10 days long. In 2014, the festival was celebrated as the fourth international WorldPride on a larger scale than regular Toronto Pride.

A non-profitable organisation with 22 teams hosted the vibrant Pride Toronto, wherein each team took up the responsibility of particular activities. Every year, the parade and march course through the Town of New Toronto (Yonge Street), Bloor Street and Gerrard Street.

The Church and Wellesley village is the vantage point. Pride Toronto was introduced in 1981 after a mass protest and clashes with police and the government for their right to love. That resulted in the establishment of the vibrant Pride Festival we see today. 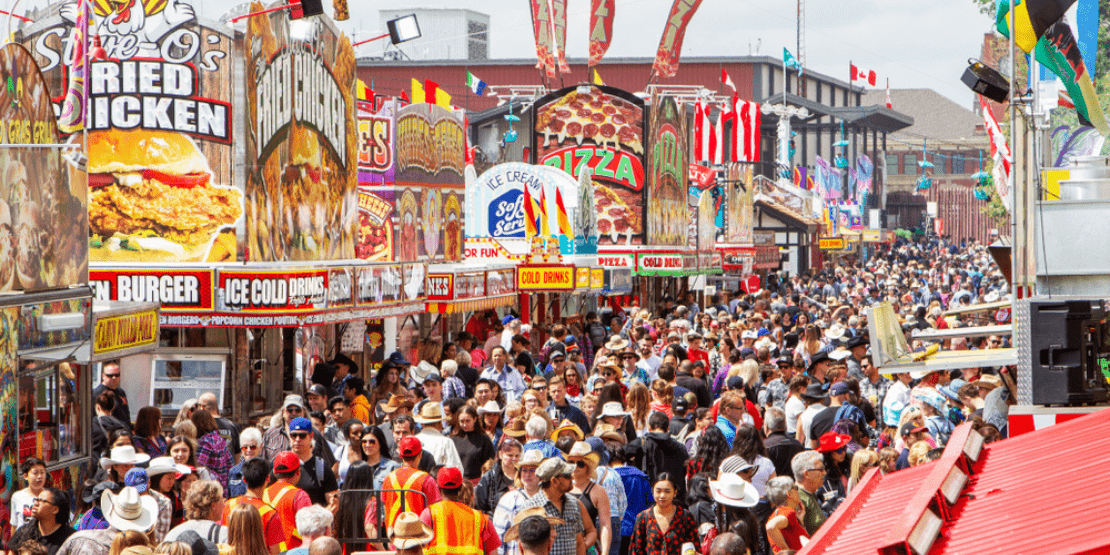 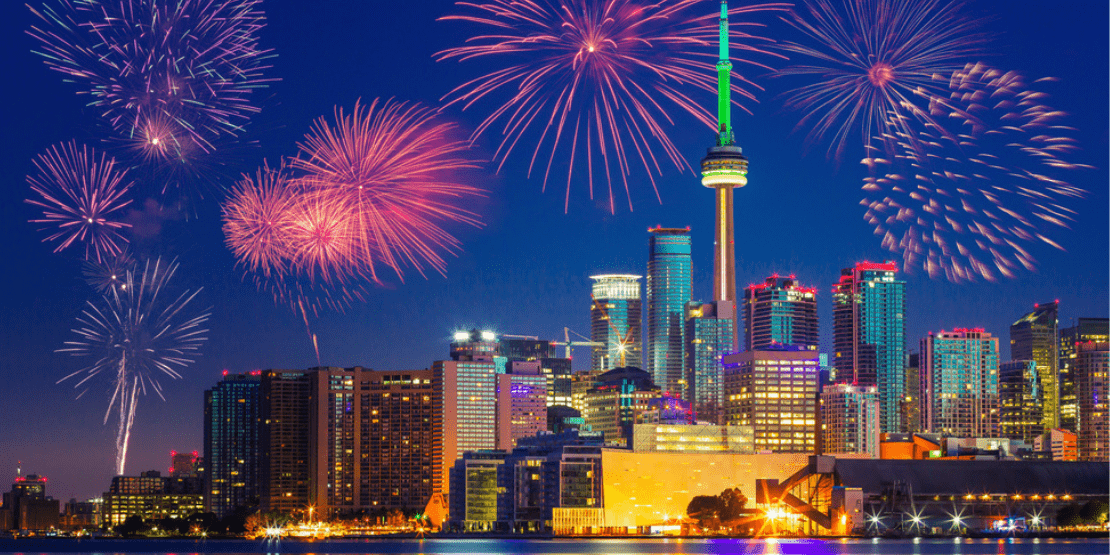 The Celebration of Light is also known as the Honda Celebration of Light. This annual festival features one of the largest musical fireworks displays in July and August in Vancouver. Apart from sightseeing, you can also listen to incredible music and give your taste-buds the ultimate experience of some of the best foods in the region. The festival of light is the world’s longest-running offshore musical firework festival.

The English Bay Beach is the vantage point of this festival, and it becomes very crowded during this time. So, it is better to reach the location early and get a spot that offers the best view of the fireworks. Over 1 million people across the globe attend this Canadian festival every year. 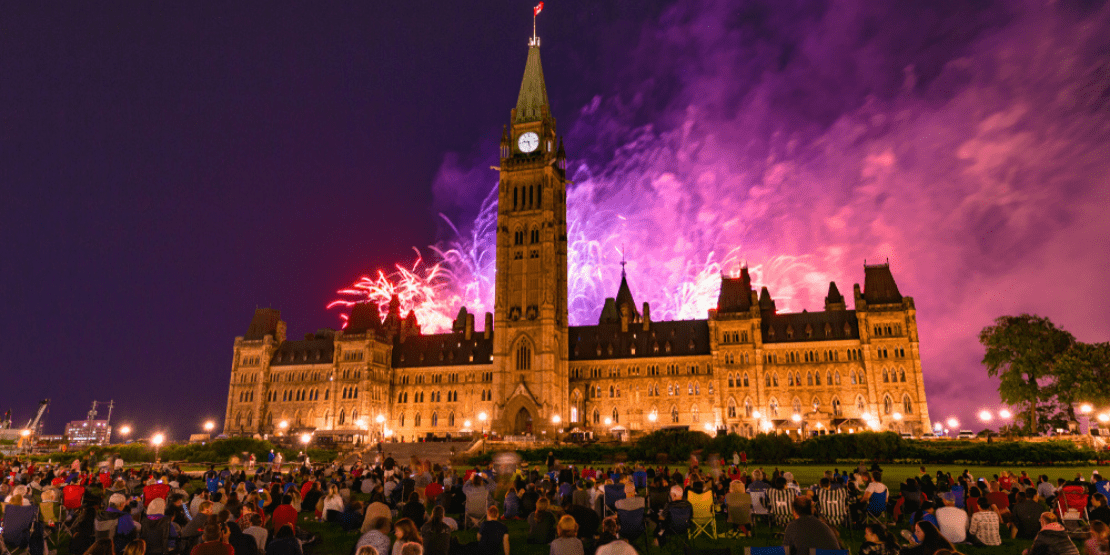 Canada Day is the biggest Canadian festival celebrated throughout the country on 1st July. This festival is celebrated as a reflection of the birth of Canada and its past. People proudly wave the Canadian maple leaf flags while wearing red and white attire that resembles its national colors.

Parades, concerts, barbecues, fireworks, singing the national anthem and doing other patriotic activities are also some of the many highlights of this festival. They even paint their faces in red and white colors to show their love for their country. The country’s capital, Ottawa, becomes the vantage point of the celebration of Canada Day. 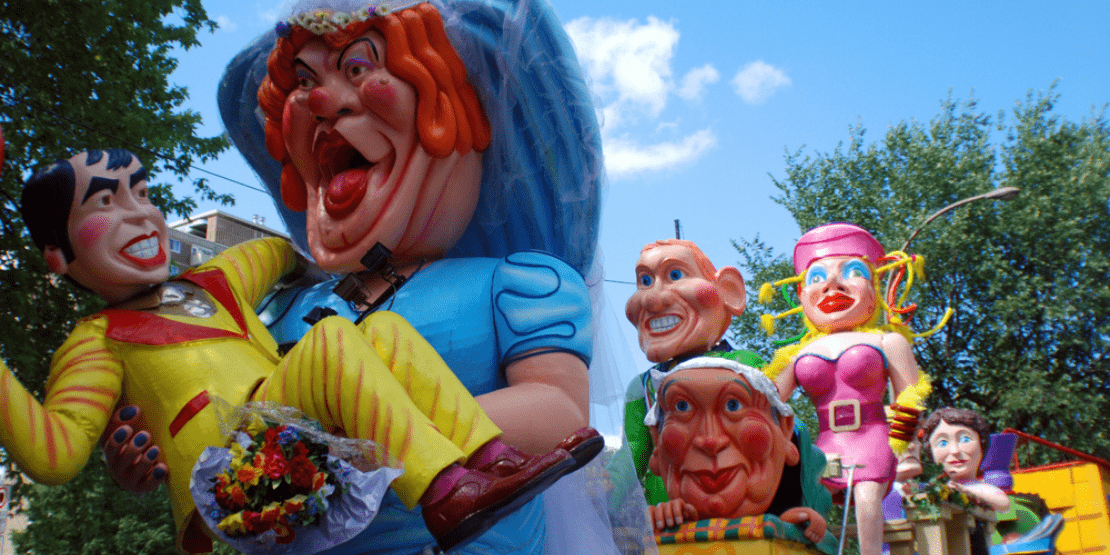 The Montreal Comedy Festival, also known as Just For Laughs, is an annual Montreal event held in July. Just for Laughs is one of the most reputed and popular comedy events that feature some of the best comedy shows, such as Rowan Atkinson’s Mr Bean (1889). However, the current comedy festival has a completely revised format.

The readapted outdoor and indoor shows and free digital access to the festival across the globe are available now. In recent times some of the greatest comedians, like Jimmy Carr, Katherine and Kevin Hart, got featured in this Canadian festival. 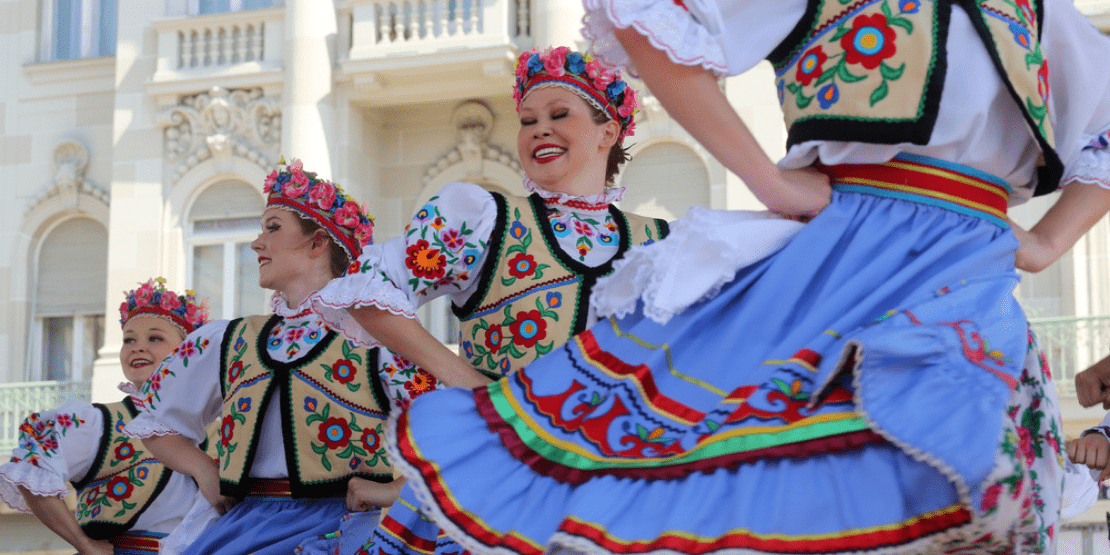 The Edmonton Folk Festival is a leading annual folk music festival held in August. This festival is a four-day-long event that features six stages hosting various concerts and workshops.

Edmonton Folk Festival attracts folk music lovers across the globe to perform and spectate. The quality of music is next level. During this festival, over 2,700 people volunteer, which keeps the ticket prices down. It also comprises a large beer garden that serves more beer compared to any other festival or event in western Canada.

Temporary food stalls offering vegetarian and international cuisine along with carnival fare are also lined up during this time so that you can have your fill while listening to some of the best music live. Album CDs of the artists are also available during this festival so that you purchase and spread the good word. 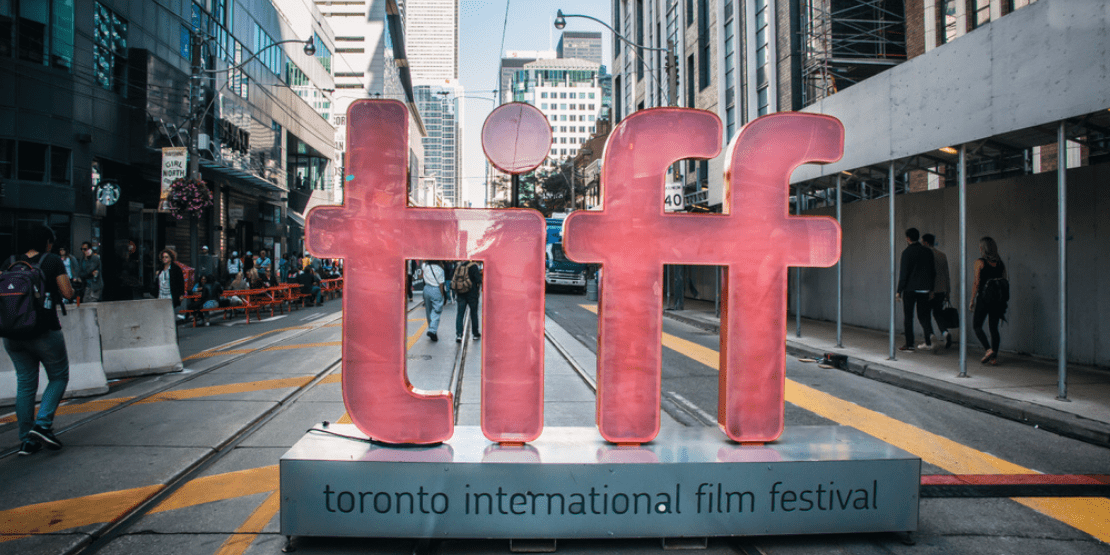 The Toronto International Festival (TIFF) is one of the leading charitable, cultural events. This 11-day long festival aims to change the perception of society via films. TIFF festival is celebrated annually in September. In 2021, TIFF welcomed over 200,000 people to the festival.

The screen featured over 118 feature films, four series and about 45 short films from 64 different countries. This charitable event generates about CAD 200 million every year. One amazing fact about TIFF is that many films premiering in this festival get nominated for the Oscars and Golden Globe Awards later on.

The 47th edition of TIFF will return in September 2022. However, a ticket for regular and premium screening at these venues will cost you around CAD 25 and CAD 40, respectively. If you wish to submit your film, you must register at FilmFreeway. 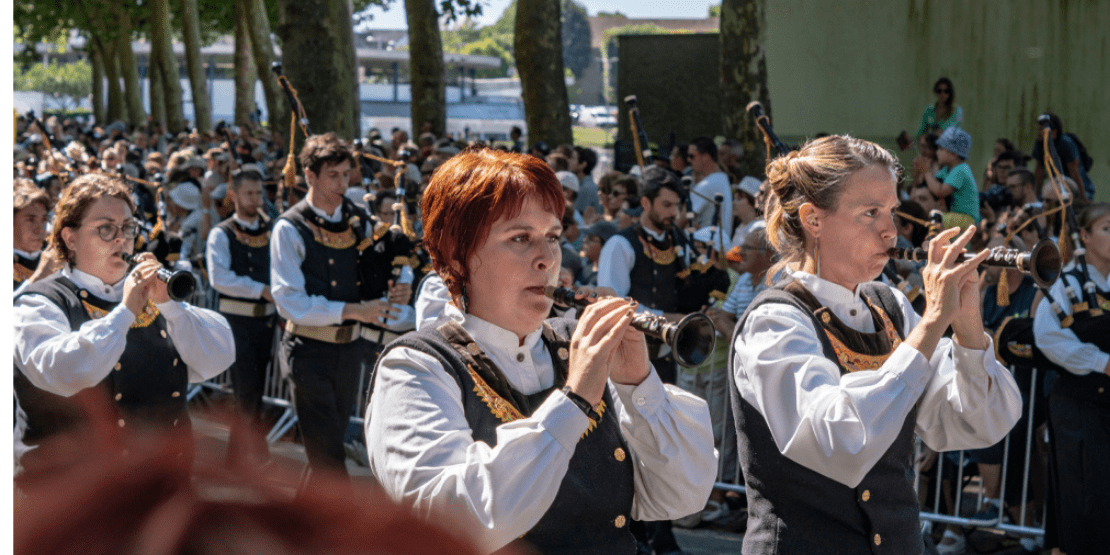 The Celtic Colours International Festival showcases the traditional Celtic talents and cultures of Cape Breton Island. It is a 9-day long festival celebrated on each Canadian Thanksgiving weekend in October.

About six concerts showcase the musical culture of Cape Breton each day. However, the most popular feature in this festival is world-class bagpiping, Cape Breton fiddling, Gaelic singing and the local traditional dance. Music lovers from all across the globe visit this Island to participate in this musical festival.

During this time, you can listen to the music of some of the greatest entertainers, such as Buddy MacMaster, Ashley MacIssac, Rita MacNeil and the Rankin Family. Numerous concerts, activities and events take place in communities around the Island.

CCIF also presents substantial visual arts, workshops and a nightly Festival Club. This Canadian festival was first introduced in 1997 and is now one of the major festivals of the country.

Cherish each Canadian festival by being a part of it. Hosting different festivals all year round, Canada seems to be one of the most colourful countries in the world. Apart from sightseeing and indulging in adventure sports, the country opens its doors for you to participate in their vibrant and lively festivals. So, whether you are planning for a trip or shifting to Canada, get ready to indulge yourself in the frolicking festivities of the country year-round.

You May Also Read:

What are the festivals in Canada?

Canada hosts multiple festivals. Some of the most popular festivals in Canada are Canada Day (celebrated throughout the country), Quebec Winter Carnival, Celebration of Light in Vancouver and Just for Laugh in Montreal.

How many celebrations are there in Canada?

There are countless festivals that the people of Canada celebrate, including Celtic Colours International Festival, Calgary Stampede, Pride Toronto, Quebec Winter Carnival, Ottawa, Winterlude and so on.

Which festival is celebrated in Toronto?

Toronto International Film Festival is celebrated in Toronto in the month of September, where they feature both local and international films, documentaries and series.

What are the top 5 holidays in Canada?

Yes, Canadians celebrate traditions with full enthusiasm and preserve their western culture. Celtic Colours International Festival and Calgary Stampede are some of the festivals in Canada that are celebrated to showcase Western culture, Celtic talent and traditions.