Winter is not a season, it’s a celebration. Canada is the epitome of this statement. The chilly, frost-biting cold in Canada isn’t for the faint-hearted, however, the best winter festivals happen here in the maple country. Canada, in a minus 40-degree temperature, knows how to celebrate the climate with zeal and excitement.

Canada, in its all might, hosts the best snow festivals in the world. Here is a list of Canada’s Best winter festivals to visit, explore and embrace. 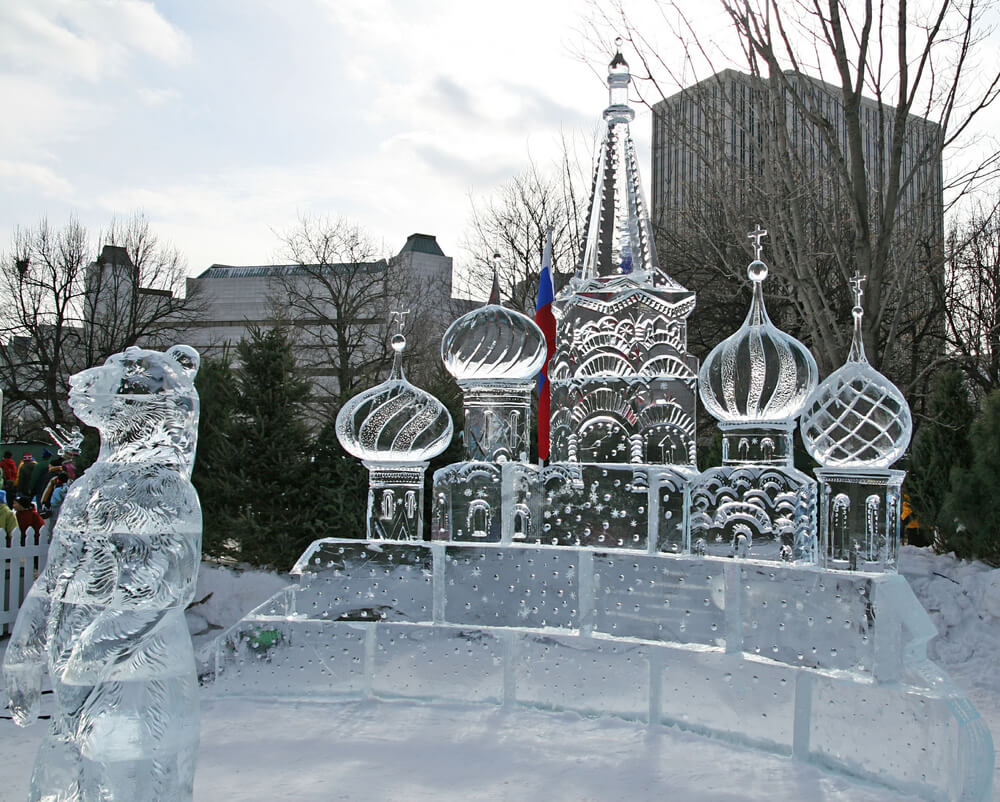 Winterlude is a wonderful illustration of how Ottawa embraces winter. To honour Canada’s winter culture and climate, Winterlude is an annual winter carnival hosted in Ottawa and Gatineau. The National Capital Commission established Winterlude in 1979. It lasts for three weekends in February and was first marked by horse races on the Rideau Canal.

Two of Winterlude’s key attractions are the Rideau Canal Skateway and Snowflake Kingdom, a sizable snowpark featuring snow installations, kid-friendly activities, and ice slopes. Throughout the event, ice sculpture competitions, triathlons, ice skating and musical performances are held in various locations. No festival would be complete, of course, without its mascot, The Ice Hog Family.

Don a pair of skates for an ice hockey game, or witness the Bed Races, where teams decorate beds with extensive precision and race them down the canal at high speed. Additionally, there are outdoor dance events and an Ice Dragon Boat Festival, which began in 2017. 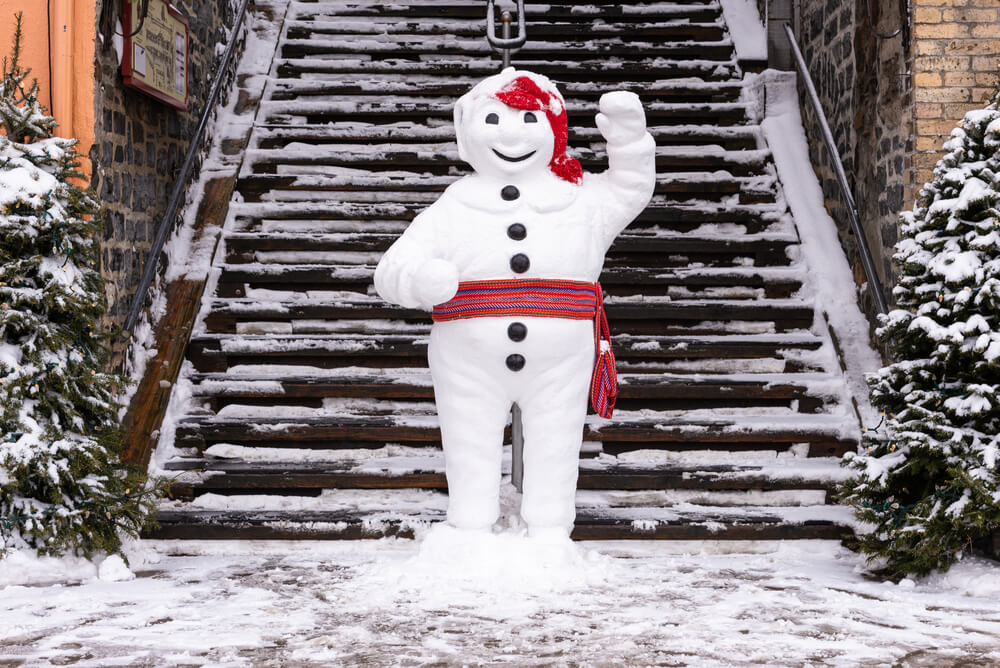 Carnaval is one of the best winter festivals and has great credibility. It began in 1894 and was celebrated on and off, not in a continuous fashion. The first ever Carnaval took place on January 29, 1894, and since 1955 it has grown to be one of Canada’s greatest and most famous yearly winter carnivals.

The popular Carnaval mascot Bonhomme was made official as the snow festival’s representative in 1955. The highlight of the carnival is the Bonhomme Ice Palace, which is constructed every year. The additional activities include axe throwing, mini golf, night parades, racing in ice canoes, maple taffy on snow, and other events. The tobogganing slope on Dufferin Terrace is a Carnaval classic. An event not to miss is the night parade, led by the exuberant Bonhomme and his cheeky knights. 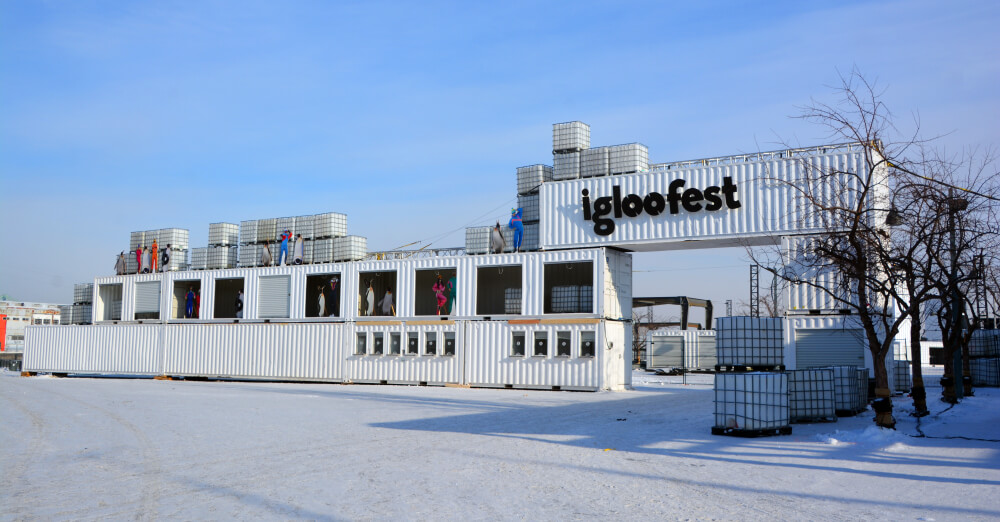 Igloofest is a four-weekend outdoor winter music festival in Montreal that showcases outstanding performances worldwide. This winter carnival draws hordes of electronic music enthusiasts every year. Since 2007, the celebration has enlivened the picturesque Old Port neighbourhood.

In addition to terrific music, Igloofest offers many activities for attendees, such as the appropriately named “Iglooswag” competition for quirky winter attire. Throw a neon snowsuit from the 90s and embrace the illuminated winter carnival. 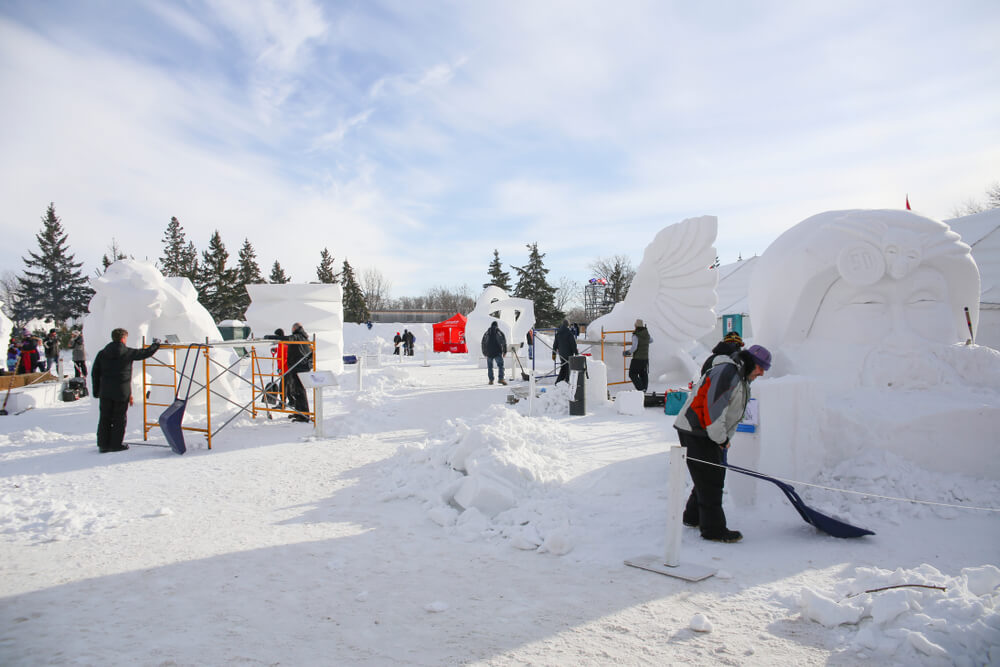 The festival has the cutest mascot of all the winter carnivals in Canada. Léo La Tuque, a human-sized red tuque dressed in black boots and a vibrant ceinture fléchée—a traditional French-Canadian sash—became the festival’s mascot in 1972.

This snow festival in Canada presents ethnicities with a contemporary twist and features music, food, snow installations, and a picturesque winter backdrop. Additionally, it is one of Canada’s biggest and best winter festivals. 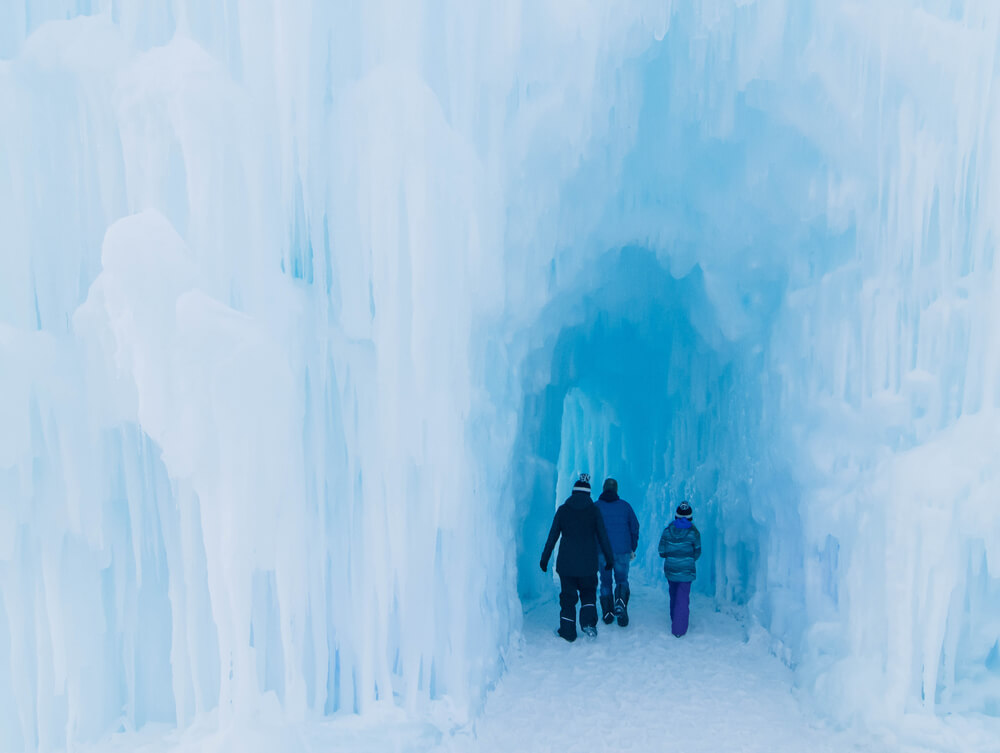 Silver Skate Festival is a 10-day winter snow festival based on families and Dutch winter customs. It incorporates recreation, skating, arts, culture, and food. The Edmonton are the best winter festivals has been the longest in Canada, with around 100,000 adventurous winter travellers visiting every year.

Locals and visitors gather on the Northern Saskatchewan River’s banks each February for ten days of skating competitions, fire and snow sculptures, and other winter-themed entertainment. Touring around the ice castle and completing the experience with a snowshoe race are just a few of the best activities to see and experience. International visitors partake in the festival’s wide range of activities, which include live music, a winter triathlon, artistic exhibits, and a Heritage Village.

FROSTival, held in Fredericton for three weeks in January and February, should not be mistaken for the American winter carnival in Fargo. The festival relies exclusively on embracing the outdoors. The ice sculpture exhibition, skiing, skating, snowshoeing, and crokicurl—a sport that combines curling and crokinole—are just a few examples of outdoor recreation options. The festival collaborates with the Shivering Songs Festival, Crabbe Mountain, and The Fredericton Playhouse to offer additional family-friendly entertainment.

Toonik Tyme snow festival occurs far later in the calendar year than other best winter festivals in Canada. This event honours Inuit customs and the arrival of Spring, which is celebrated towards the April end or May beginning. The non-profit group is in charge of an inclusive and family-friendly environment while organising the festival.

Toonik Tyme was established in 1965 by Bryan Pearson, and each featured a notable visitor who was awarded the title of Order of the Honourary Toonik. The visitors were His Royal Highness Charles the Prince of Wales, Governor General Roland Michener, and the Right Honourable John Diefenbaker. 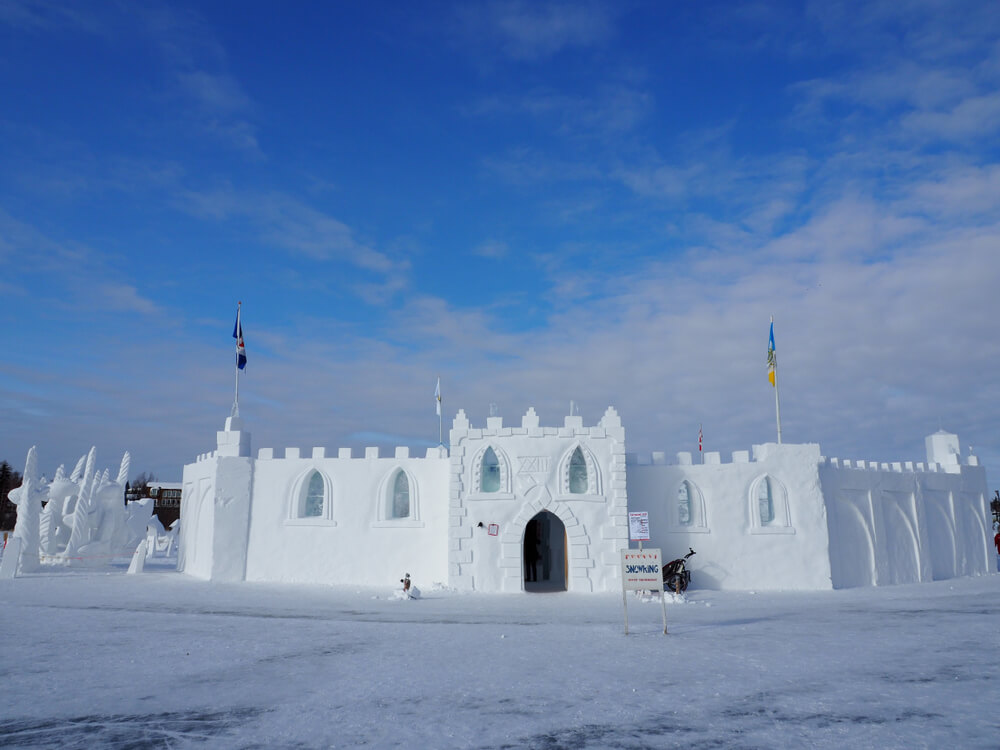 The Snowking Festival in Yellowknife honours everything frosty about Great Slave Lake. This festival is jam-packed with activities, but the main attraction is a sizable castle constructed entirely of snow and ice that takes two months to assemble and construct. Snowking has been constructing a magnificent winter wonderland for the neighbourhood and visitors to explore since 1995. The snow festival in Canada typically lasts for a month after it has taken two months to develop. The Snowcastle features a slide, patio, cafe, and other features, all covered in ice. Additionally, Snowking consistently updates additional features every year.

Children’s plays, musical ensembles, art exhibitions, film festivals, and dance events are held at the Snowcastle. The castle is full of surprises every year, filled with exciting new features. The goal of the Snowking’s best Winter Festivals is to instil a sense of community, participation, ingenuity, and active winter recreation among all visitors.

Mountains are kings in British Columbia during the winter season. Visit one of the most popular resorts in the province, and you will be spoiled for choice with great slopes. Every year in April, Whistler hosts a celebration to mark the end of the ski season for ardent skiers.

The World Ski and Snowboard Festival creates a celebration of ski and snowboarding culture. This well-known 10-day snow festival celebrates the mountain lifestyle, professional winter sports, music, art, cinema, and couture. The calendar of activities includes a silent disco, a roller derby, film and photography exhibits, and a dog parade.

Anyone who has endured the full Yukon winter, from the frost to the thaw, is referred to as a sourdough. The winter carnival offers a chance to let off some steam as over 30,000 people withstand temperatures below -40C every winter.

Yukon Rendezvous Festival is held in Whitehorse for two weeks in February. A detailed schedule of winter activities and nightly entertainment for visitors from Canada, Alaska, and the rest of the USA was set forth when the festival first started in 1964. Even now, it continues to be a winter carnival that strengthens the local economy, culture, and society by uniting the community.

Various activities are organised throughout the two-week snow festival, including a pancake breakfast, axe and chainsaw toss, dog sledding, log splitting, flour packing, and Kids Fest activities. In addition to the crowning of the festival queen, there are performances by the Snow Shoe Shuffles and the Rendezvous Can-Can dancers.

Yukoners, who spend the entire winter north of the Arctic Circle, are referred to as “sourdough” because they historically kept their sourdough starter against their bodies to preserve it from the cold. The festival’s name once included the namesake, however, that was changed in January 2021.

The Mount Pearl Frosty Festival, which runs for 12 days in February, is the biggest winter carnival in Atlantic Canada. The festival features over 80 numerous events, and some of the best ones are –

The 1983 snow festival’s main objectives are to entertain people of all ages and promote indoor and outdoor activities. The organisers want to engage the entire community by organising a diverse range of convenient and affordable events.

Over 100 activities are held throughout the winter carnival, awarding locals and tourists prizes and honours. One such programme is the Queen Silver Star Excellence Program offering young women the ability to acquire scholarships, complete service hours, and educate and build new talents.

Montréal en Lumière is a notable winter carnival celebrated in Canada and around the globe and was established in 2000. Over a million attendees embrace the delights of Montreal winter courtesy of a special programme that integrates performing arts, food, free outdoor family activities, and an entire night of exquisite unique discoveries. Montréal en Lumière, known colloquially as the Montreal High Lights Festival, is a two-week festival which transforms the city into a massive, multicoloured fiesta.

There are approximately 100 acts, including music, dance, and visual arts. The SAQ Wine and Dine Experience attracts top chefs and winemakers from all around the world. Huge fireworks displays take place over a bustling amusement park. An outdoor art exhibition with acts and projections transforms Old Montreal into a nighttime attraction. It highlights Montreal’s famed party atmosphere and entertainment flare.

The winter carnival’s central focus is Montreal’s annual all-night extravaganza, Nuit Blanche. On the festival’s final Saturday, over 200 free events are taking place throughout the city from dusk to dawn. Free public transportation is available to get festival-goers from one location to another.

This winter, there’s no excuse to burrow inside your blankets. Visit Canada’s best winter festivals and experience the Canadian winter from coast to coast with zeal and joy.

Which is the most famous snow festival in Canada?

One of Canada's best and most known snow festivals is the Carnaval in Quebec City. The festival's activities include axe throwing, ice canoe races, and more.

Where should I experience the Canadian Christmas holiday?

The largest city in Canada, Toronto, hosts one of the largest Santa Claus parades in the world, along with the illumination of a gigantic Christmas tree in Nathan Phillips Square. Santa Claus parades, dazzling events, and holiday performances can all be found across the entire city, which has been converted into a winter wonderland.

At the Winterlude carnival, visitors can soak in stunning ice sculptures, skate on the internationally renowned Rideau Canal Skateway, and have a blast in a sizable snow playground.

What is the duration of Snow Magic in Toronto?

Snow Magic is a fantastical, immersive journey with elements of fire, ice, and light. Visitors will enjoy illuminating art displays, cutting-edge fire effects, and light tunnels over a distance of 1.7 kilometres for about 30 minutes.

Can I participate in World Ski and Snowboard Festival?

Yes, you can participate in the World Ski and Snowboard festival in April. Keep a tab on all the updates on their official website.

What sporting events are covered in Quebec Winter Carnaval?

« Best Places To Spend Christmas in Canada
What to Fix and Not Fix Before Selling a Home? »