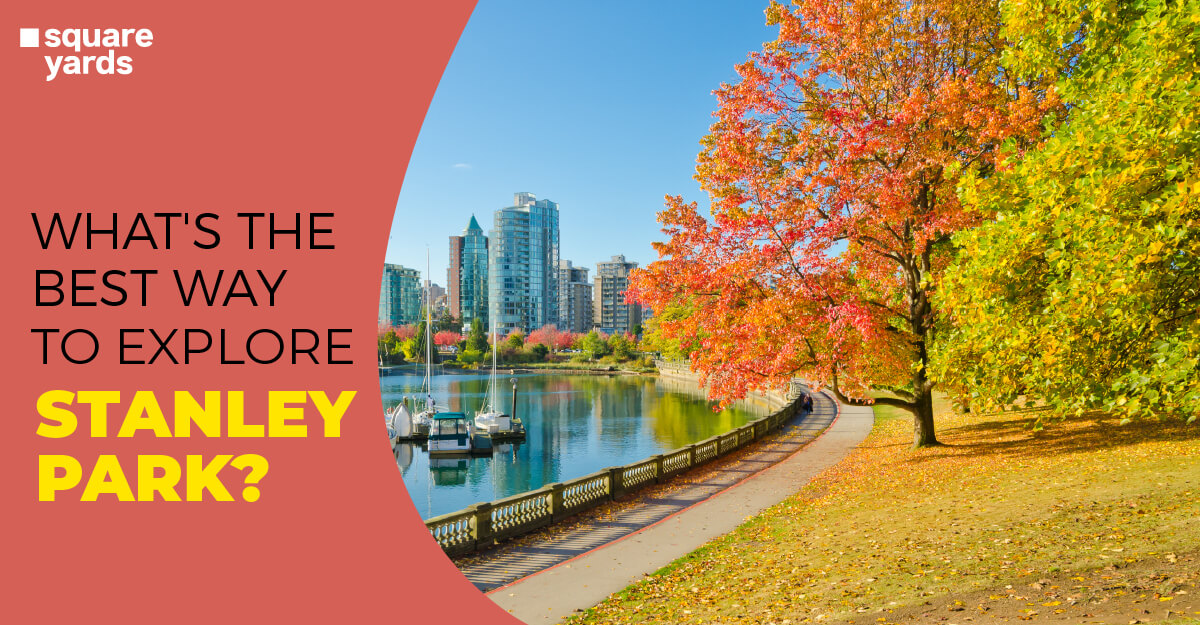 Tourist attractions in Stanley Park are a lush oasis in the middle of Vancouver’s cityscape. Explore 400 acres of natural rainforest on the West Coast and enjoy beautiful views of the mountains, water, sky, and splendid trees along Stanley Park’s famous seawall. You can uncover miles of hiking trails, beautiful beaches, wildlife, great restaurants, natural, cultural and historical attractions, with much more to explore. The park offers a variety of unforgettable experiences for people of all ages with varied interests, including Canada’s largest aquarium.

Parks in Vancouver are open from 6 am to 10 pm, and restrooms are available from dawn to dusk, unless otherwise stated. Stanley Park is located on the west side of the downtown peninsula in Vancouver, British Columbia. The park is surrounded by the waters of the Burrard Inlet and English Bay. Standley Park can be accessed through the West End of downtown Vancouver and north through the Lions Gate Bridge into North Vancouver.

There are several ways to get to tourist attractions in Stanley Park, but the best way is by car or bike. You can also drive, park, and rent bikes. Due to the park’s size, these options allow easy entry to Stanley Park to explore different areas.

Things To Do in Stanley Park 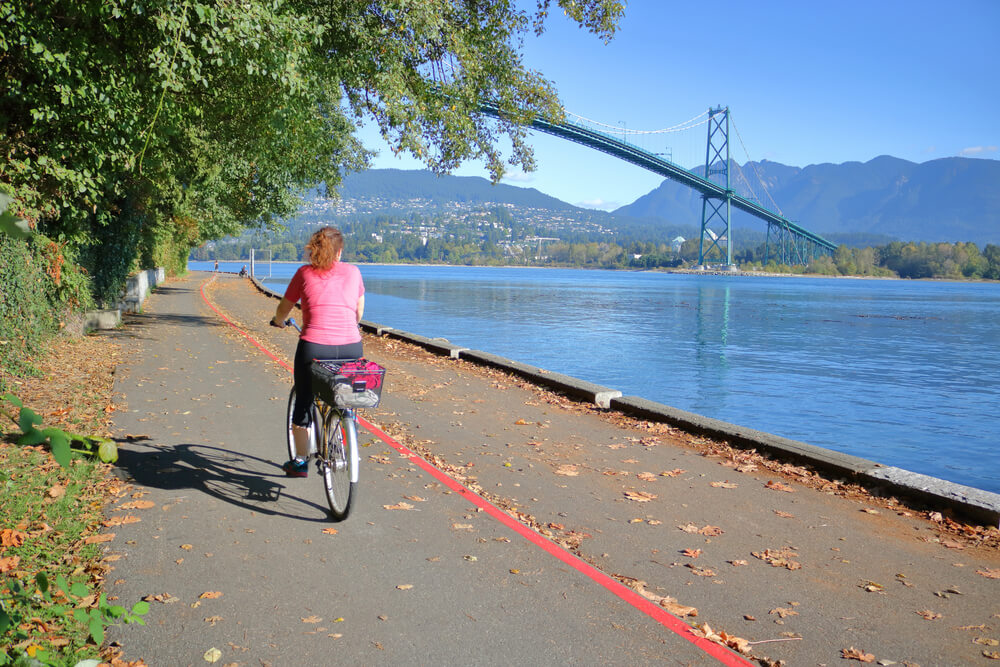 Walking the entire trail of stanley park seawall can take two-three hours, so we recommend renting a bike to cut the time in half. Biking on the stanley park seawall is one of the best summer experiences in Vancouver. It is a great way to spend an afternoon exploring Stanley Park and enjoying the beautiful scenery of Vancouver. The breakwater is the world’s longest uninterrupted waterfront promenade, with equal parts a transportation corridor and an outdoor recreation centre.

kwater to enter some of Vancouver’s best beaches. It also offers excellent views of the mountains and the Lions Gate Bridge. You can get all the information on the carefully placed boards along the trail. 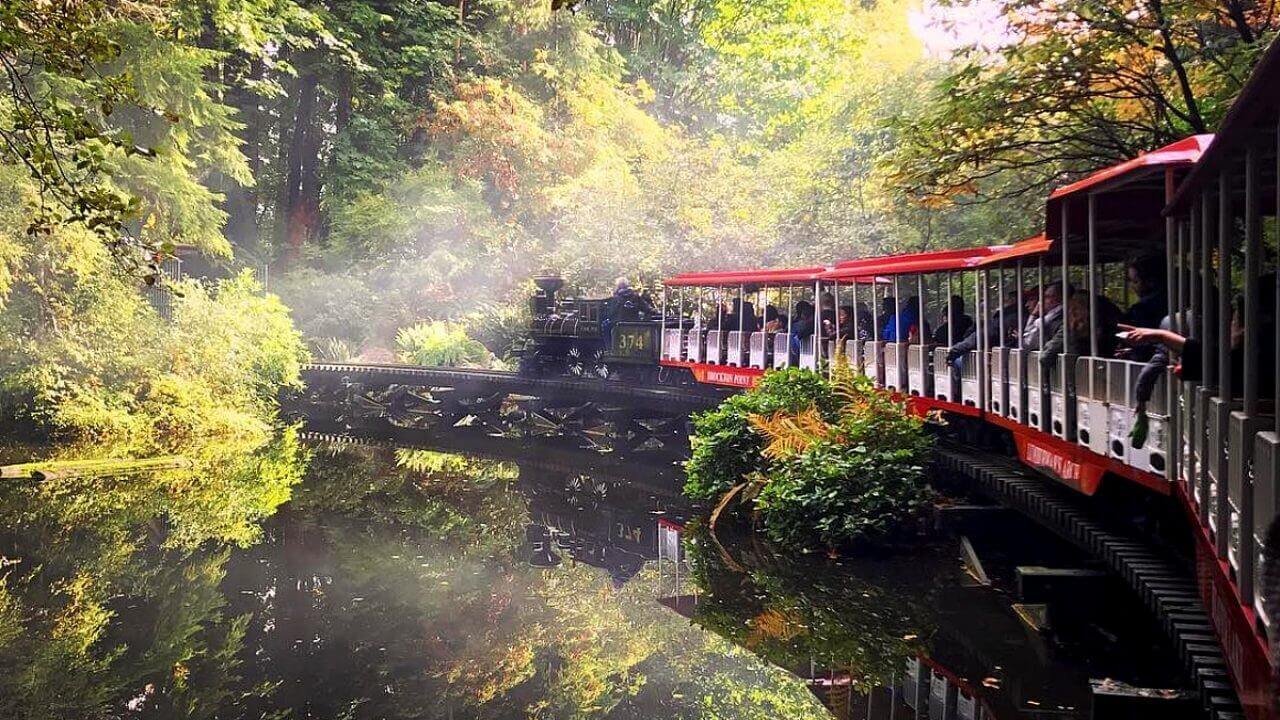 The Stanley Park Train is a family-friendly fun activity. It hosts various seasonal events, such as the Bright Nights, a magical light show in winter in Vancouver or a ghost train around Halloween with costumes and spooky decorations. Passengers can ride an old-fashioned train through the park for two kilometres which takes 15 minutes. The train passes through an area of ​​the park that was swept away by Typhoon Frida in 1962, considered to be Vancouver’s worst storm ever.

If you’re travelling to Vancouver with your kids, there’s nothing better than taking a Stanley Park miniature train ride through the woods. History buffs will appreciate the replica locomotive of Canada’s first transcontinental passenger train that entered Vancouver in the 1880s. The Stanley Park Train runs seasonally from June 30 to September 6.

Ticket prices range from CAD 7 for a single ride to CAD 14 for a family of four.

Beautiful natural landmarks are nestled in the water at the park’s western end. You can capture beautiful shots of the marvellous Siwash rock. It’s a lovely spot for a picnic.

According to Indian legend, the 50-foot spire stands as an immortal monument to the ‘selfless Skarsh’ who was turned to stone by ‘the shapeshifter Kuas’ as a reward for his altruism.

Stanley Park has 17 km of trails through the central woodlands which are perfect for hiking, walking, running, and cycling. Most trails are relatively flat, but some sections can get steep. You can see some of the tallest trees in the country. Walking through Stanley Park feels like being in the middle of nowhere in the city. Just walk until you get lost in the lap of nature.

If you’re more of a planner, here are some of the popular ways : 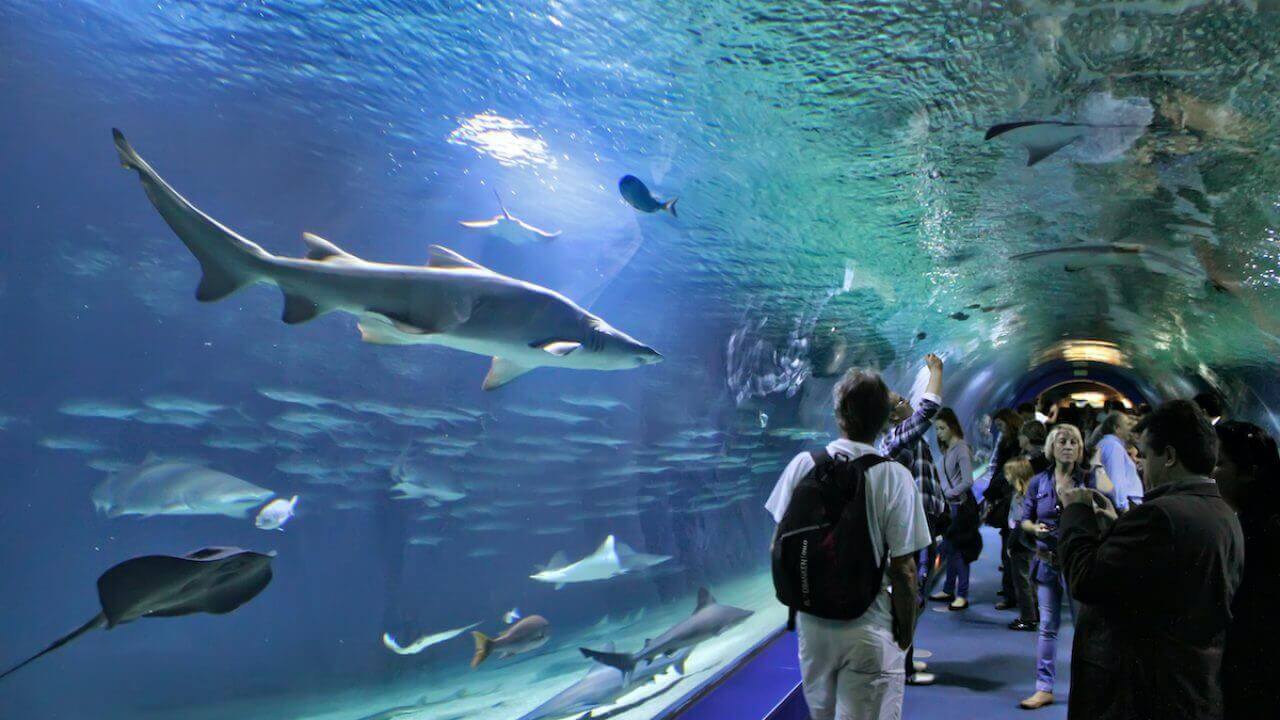 Since 1956, the Vancouver Aquarium has been the city’s main Tourist attractions in Stanley park. The aquarium has 30 different exhibits and is home to over 65,000 animals. Over 58,000 animals occupy the park in 166 exhibits at Canada’s first Coastal America Learning Centre. Of the nearly 600 species of animals, the most popular are still Pacific white dolphins, sea otters, green sea turtles, zebra sharks, and California sea lions.

Children immensely love the variety of amphibians and reptiles that live in the tropics and the Amazon rainforest. Other popular galleries include The Canadian Arctic, Penguin Point, and Treasures of the British Columbia Coast. Aquariums are committed to animal rescue, research, and environmental protection. Additionally, several educational programs at the Vancouver Aquarium help visitors learn more about the animals and their care. The Vancouver Aquarium is an excellent place for you to spend a day and one of the best places to visit in Vancouver on a rainy day. Vancouver Aquarium opens every day from 10 am to 5 pm.

Note : There is no entry fee for children under four years of age. All tickets include free entry to the 4-D Theater at the Vancouver Aquarium. 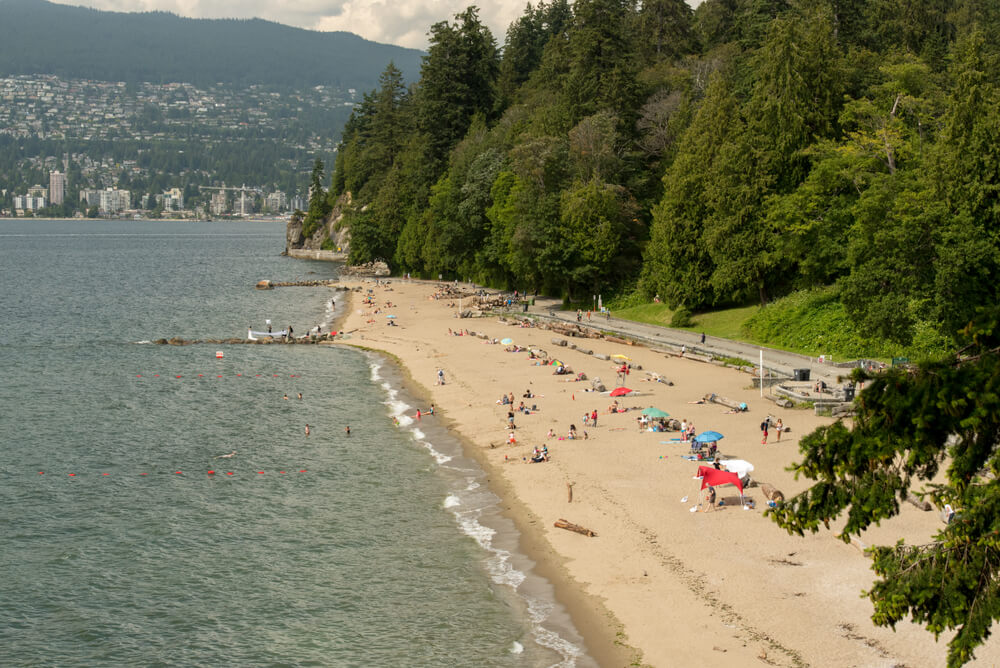 You can go from dense forests to sandy beaches in minutes. The park has two great beaches out of three to hang out and relax. Tourist attractions in Stanley park has three aptly named beaches: First Beach, Second Beach, and Third Beach. Depending upon your desire, one may be better than the other.

You may be wondering where First Beach is. It is officially called English Bay Beach and is just outside Stanley Park. It has volleyball courts, restaurants, paddleboards, and bathrooms, among other facilities. Facing west, it is a great spot to watch the sunset. If you want to swim and enjoy the beach, First Beach is the place to go. It is also great for people-watching: urban professionals, tattooed hipsters, starving artists, and tourists can all be found vying for a little piece of land by the sea.

It offers a large outdoor heated pool for those afraid to swim in the sea. The vantage points give great views of the English Bay and the Vancouver skyline. Second Beach in Stanley Park is a sandy beach with shops and restrooms. It is not a very big beach, but it has plenty of space for sunbathing and swimming. In the summer, Second Beach is manned by lifeguards.

Third Beach is more extensive than the other two beaches and offers some of the most spectacular views of the ocean and West Vancouver. Climb further up the Stanley Park Seawall to find the secluded Third Beach. Its private ambience is perfect for sandy beaches and enjoying romantic sunsets away from the hustle and bustle of the First and Second Beach crowds.

Due to Vancouver’s relatively cold climate, the swimming season of Vancouver’s beaches falls from June to mid-September, which is also the most suitable time to visit Vancouver. All three beaches have kiosks offering a variety of food, hot and cold drinks, and ice cream. 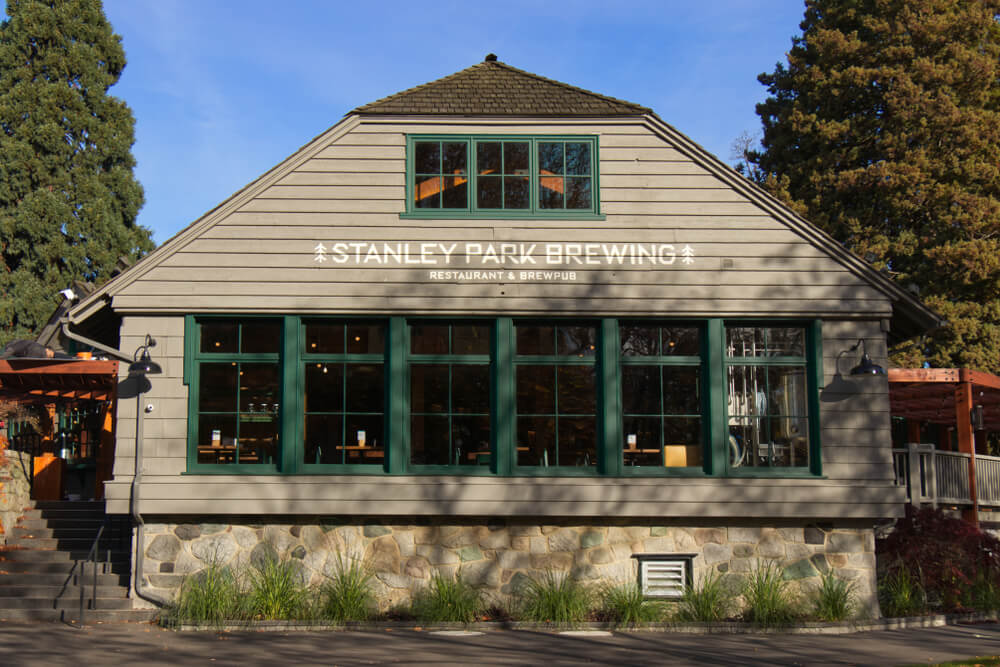 A cold beer is perfect after cycling along the embankments and beaches of Stanley Park. Fortunately, there is a brewery within the park. Stanley Park Brewing makes delicious West Coast-inspired craft beers. You can try them by stopping by the brewpub and tasting room at the entrance to Stanley Park. It offers a casual, fun atmosphere and a great selection of beers and snacks. It’s a favourite place with plenty of beers and pub grub.

Stanley Park and its surroundings offer no shortage of panoramic beauty. The most satisfactory view is from the Lions Gate Bridge. The Lions Gate Bridge is a suspension bridge that crosses the Burrard Inlet and connects the cities of Vancouver and North Vancouver.

Prospect Point Park is one of the best places to see the Lions Gate Bridge. Enjoy expansive panoramic views of mountains, sea, and city from one place.

One of Vancouver’s most visited attractions is the totem pole of the Aboriginal people at Brockton Point Totem Poles in Stanley Park. Nine totem poles were brought to the area from Haida Gwaii on BC’s central coast. The latest stick was carved by members of the Squamish Nation and brought to Brockton Point in 2009.

Beautiful to look at, these totem poles offer a way to connect with the history and culture of the region’s indigenous peoples. This is one of the unique things to do at Stanley Park. Indigenous cultural ambassadors are present to explain the area’s history, the traditional uses of the park’s flora and fauna, and the aspirations of local Indigenous peoples today.

The band cover was dedicated to the departed widow of previous Vancouver Mayor W.H. Malkin when it was constructed in 1934. Malkin Bowl, Stanley Park’s outdoor concert venue, has featured Canadian performers such as The Tragically Hip, Blue Rodeo, and Broken Social Scene.

Malkin Bowl, once a summer-only facility, is now accessible for year-round rental. The outdoor theatre recently underwent a renovation that included the latest conditioning and heating equipment, a new wall, and a sliding platform door.

It’s a large cannon located in Coal Harbour, Vancouver, named after how it was routinely shot every night at 9 p.m. Stanley Park used to be home to the Nine O’Clock Gun, which was located near the Brockton Point Lighthouse. In 1954, it was relocated towards the southern side of Brockton Point. The cannon was refurbished in 1986, and a new safe house was constructed.

People have thrown pebbles into the barrel several times, and they have been shot out. On one occasion, a boulder landed on the floating gas station’s sign. The new structure is intended to prevent this from occurring.

For over a century, this cannon has been shot practically every night! It’s a Vancouver tradition, and people still assemble every night to watch and listen to it burn! The Nine O’Clock Gun has an interesting history and even has its own Twitter account! The Nine O’Clock Gun was fired at 7 p.m. instead of 9 p.m. for a few months in 2020 to help the important employees working during the COVID epidemic.

What is so special about Stanley Park?

When in Vancouver, Stanley Park is worth a visit. Besides the park’s impressive size (405 acres!), Stanley Park has a lot of fun activities like the Vancouver Aquarium, bike rides, etc. It is also a beautiful park with unparalleled views.

What is the easiest way to explore Stanley Park?

The best way to visit Stanley Park is to rent a bike and experience nature to the fullest.

Do you have to pay to enter Stanley Park Vancouver?

Visiting Stanley Park is free, but there is a charge for parking and some activities. However, walking, jogging, cycling on the breakwaters, or visiting the beach are free of cost.

What is the entry fee for the Vancouver Aquarium?

Here are the prices to visit the venue from early 2022:

The aquarium membership fee is cheaper than two entrance fees, so it’s a pretty good deal. Membership fee prices for late 2022 are as follow:

Does Vancouver Aquarium have dolphins?

The Aquarium currently does not have dolphins. Previously the Vancouver Aquarium had Helen, a female Pacific beluga, the Aquarium’s last cetacean.

How many types of tours are available in Stanley Park?

« Is Home Insurance Mandatory in Ontario, Canada?
What Is The Cost of Living in Ottawa? »

Get Blown Away by these Hidden Gems in Mississauga!