Canada is one of the most desirable countries to settle in today. It is known for supporting an uplifted, high-end style of living with a place for everyone. Although it comprises several cities with a high standard of living, housing market in Ontario is one of the most popular states in Canada for people looking to buy a house.

The housing market in Ontario is evolving, and more and more potential buyers are now looking for an option in the state. The increase in buyer interest has led to a rise in affordable housing options in the province. 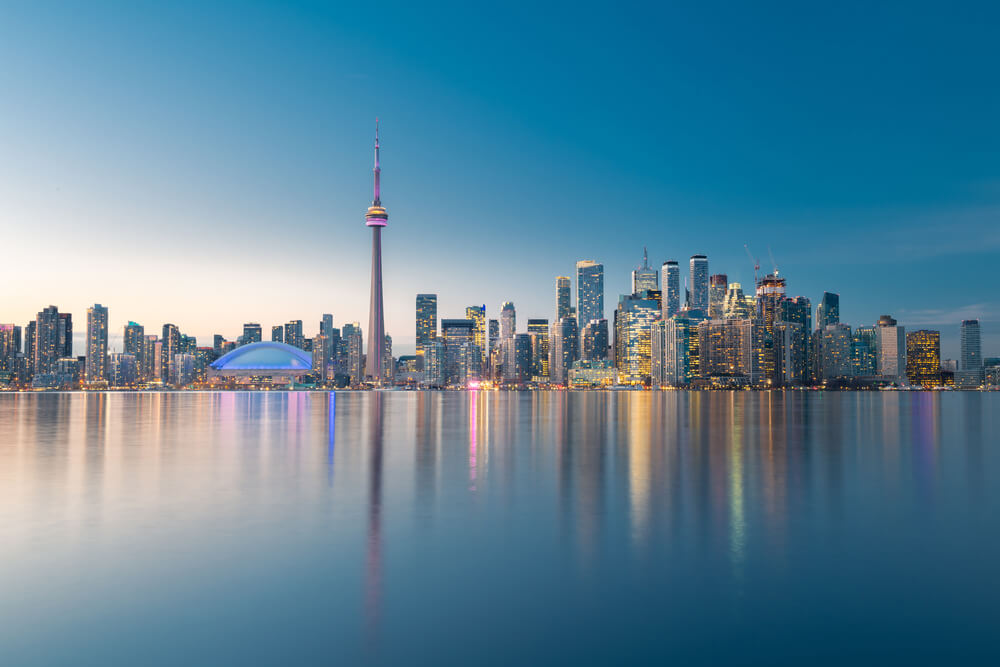 The housing market in Ontario is popular as it offers people a chance to experience the best of Canada. Ontario housing market has some of Canada’s biggest and most prominent cities, like Ottawa, Toronto, etc.

While these cities might appear to have expensive real estate, you can find some of the cheapest houses in Canada using the right strategy. You can refer to the factors mentioned below to decide how appealing the housing market in Ontario is. Let’s have a look at how Ontario stands on these factors.

The economy is slowly recovering from the slump a few years ago, which is why the housing market in Ontario is getting back on track. Nearly half of all workers in high-tech, financial services, and other knowledge-intensive businesses are located in Ontario, contributing about 37% of the nation’s GDP.

Currently, the population growth in the Ontario region is increasing as more people are migrating to the city in search of better lifestyles and job opportunities. Also, Canada has decided on high immigration targets for the year, which will contribute to the growth of the Ontario housing market.

What Are the 10 Most Affordable Cities in Ontario?

There are several affordable cities to buy a house in Ontario. You can travel to these cities and look at the houses around if you intend on buying one. Continue reading below to learn more about these cities for affordable living in Ontario: 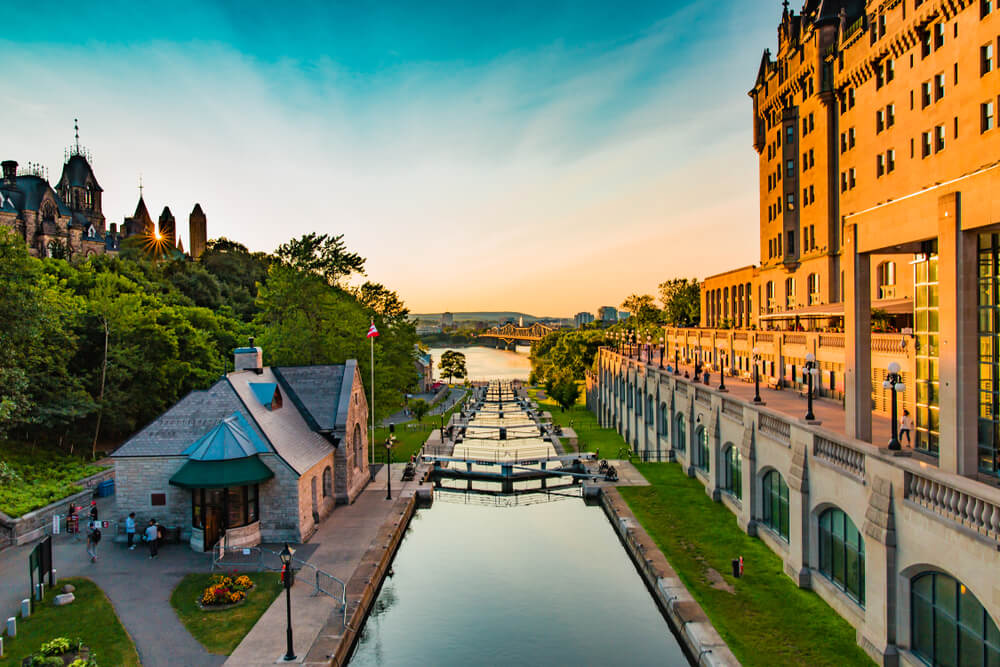 Ottawa is known for its vibrant culture. As it is the capital city of Canada, you might believe that the cost of houses in the city is high. However, owing to the city’s median income, you can easily find affordable options in the Ontario real estate market. For instance,  the average price of a real estate property in Ottawa is now $635,395. 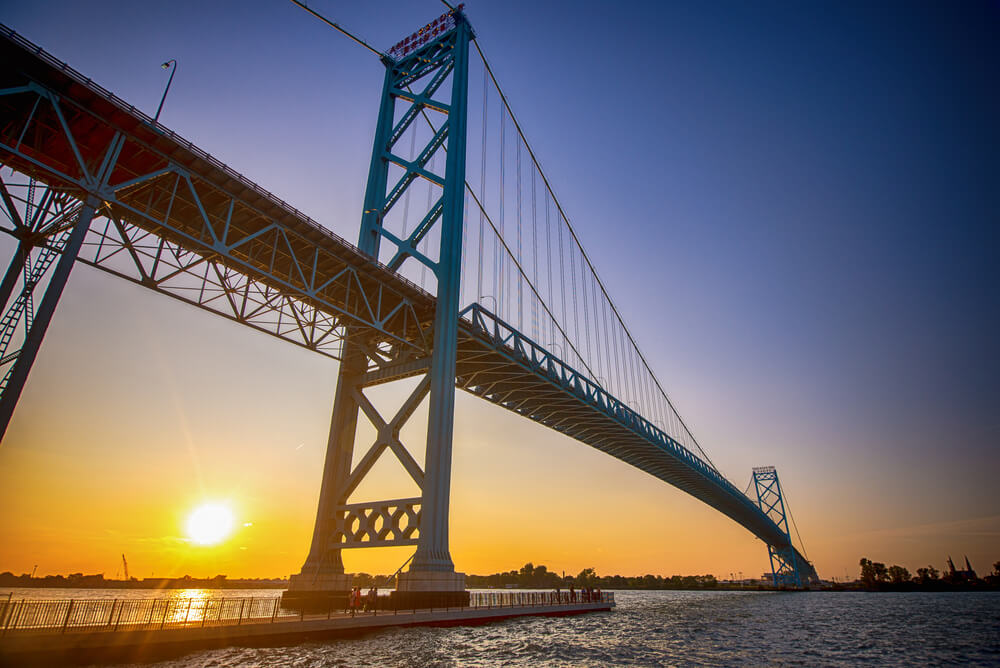 The city is home to around 200,000 people, and you also have job opportunities as several tech companies have set up shop in the city. The average housing price in Windsor is $523,928. 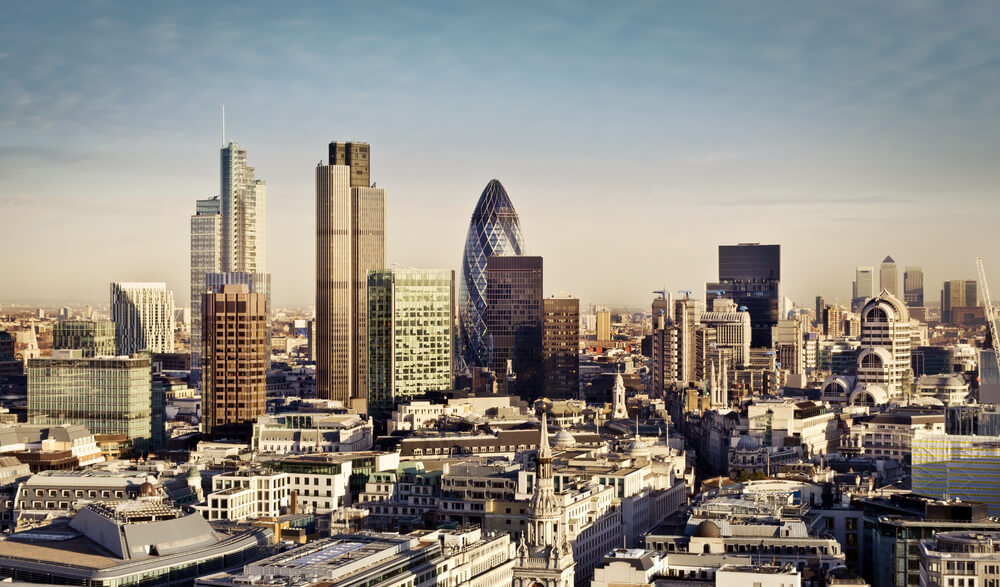 London is another affordable city in Ontario. The city is known for its art and culture and beautiful cityscape. Areas like Forest City have the cheapest houses in Canada. The average price of a house in London stands at $350,000, which is even lower than the average income of the city’s people.

If you want to buy a house at a great rate in one of the big cities of Ontario, Sudbury is your best bet. Sudbury is a city full of natural wonders, and you will enjoy the beautiful scenery around your house if you buy one in one of the remote areas. The average price of a house in Sudbury is $449,358.

The city’s economy is also growing, making it an ideal city to buy a house and settle in. On average, a resident of Sudbury earns around $30,000 more than the money required to buy a house in the area. 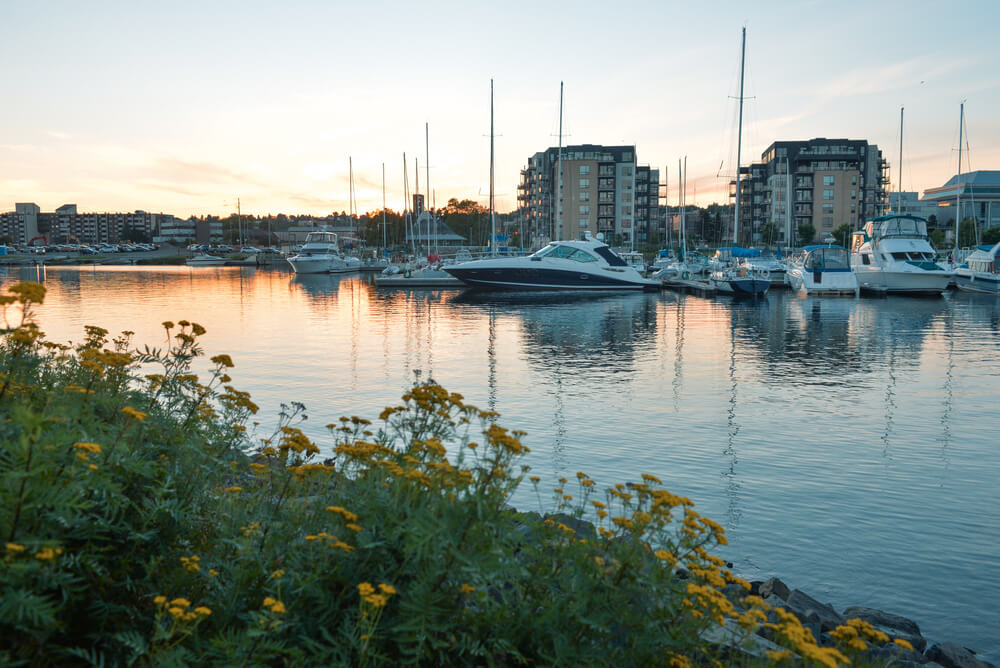 If you are looking for a city with peace and one of the best neighbourhoods, you can look for a house in Guelph. The city offers you the hustle and bustle of a big city, balancing the same with the warmth of a closely-knit community. An average house in Guelph costs $780,955.

Also, the best part about buying a home in Guelph is that the city is only 45 minutes away from Toronto. You can easily travel between the two cities daily. 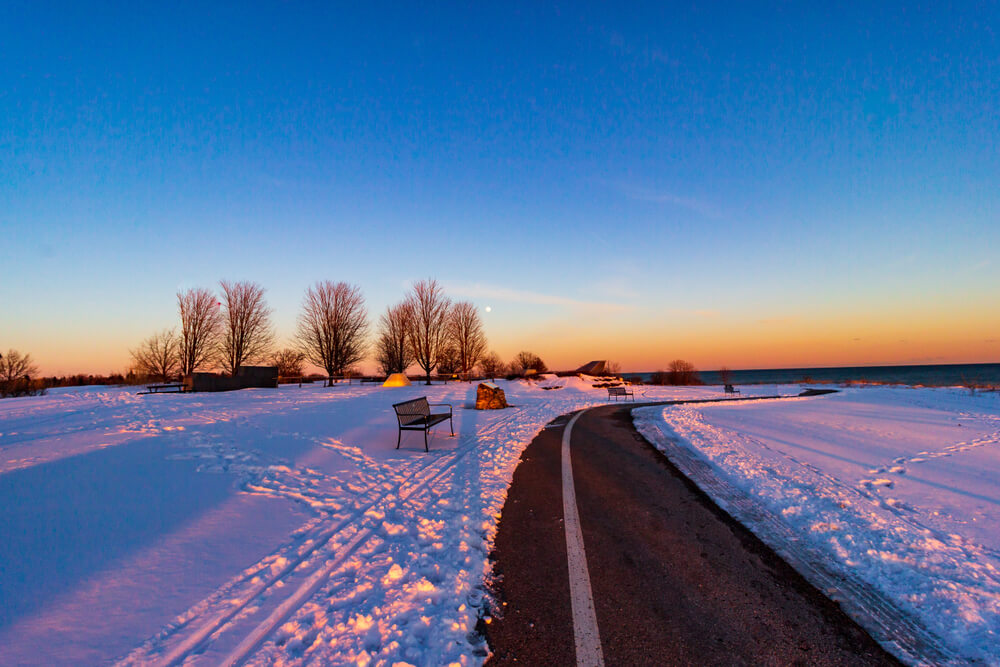 Ajax is one of the most hospitable cities in Ontario. The place’s population is growing, so the demand for real estate has increased considerably. Ajax is also quite close to Toronto.

The city’s outskirts are splendid and close to some of the best and most well-known natural sanctuaries and wildlife reserves. Currently, the average price of a house in Ajax is $933,121. 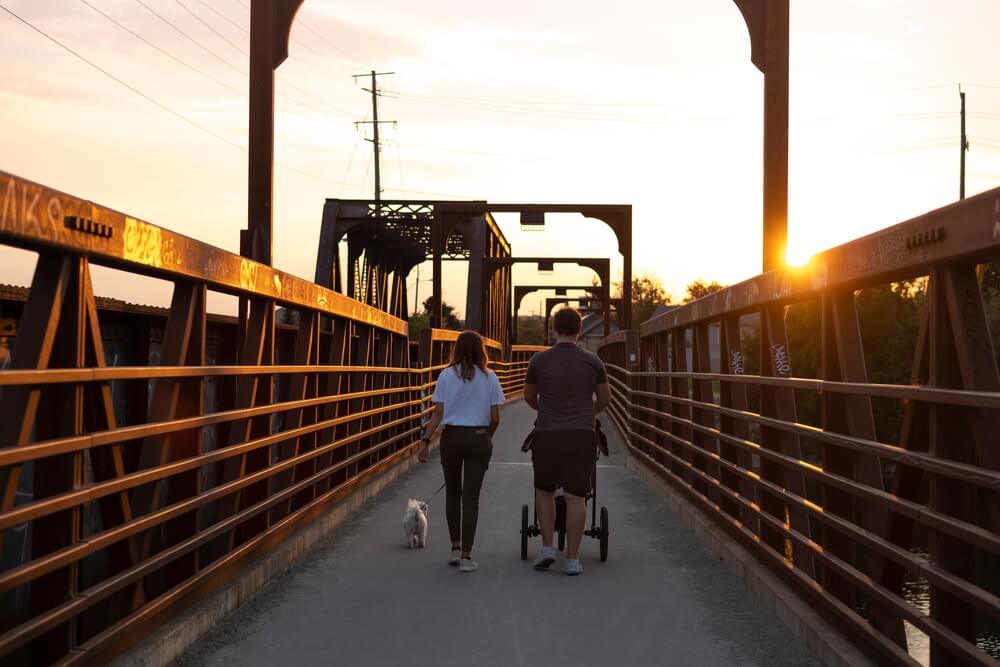 Peterborough is a beautiful city located in the centre of Ontario. It falls within the Kawartha Lakes region and is called ‘the Electric City’ by the locals. The average cost of buying a house in Peterborough is around $363,310.

The cost of living in this city is $1,021, which is quite low compared to other cities in Ontario. 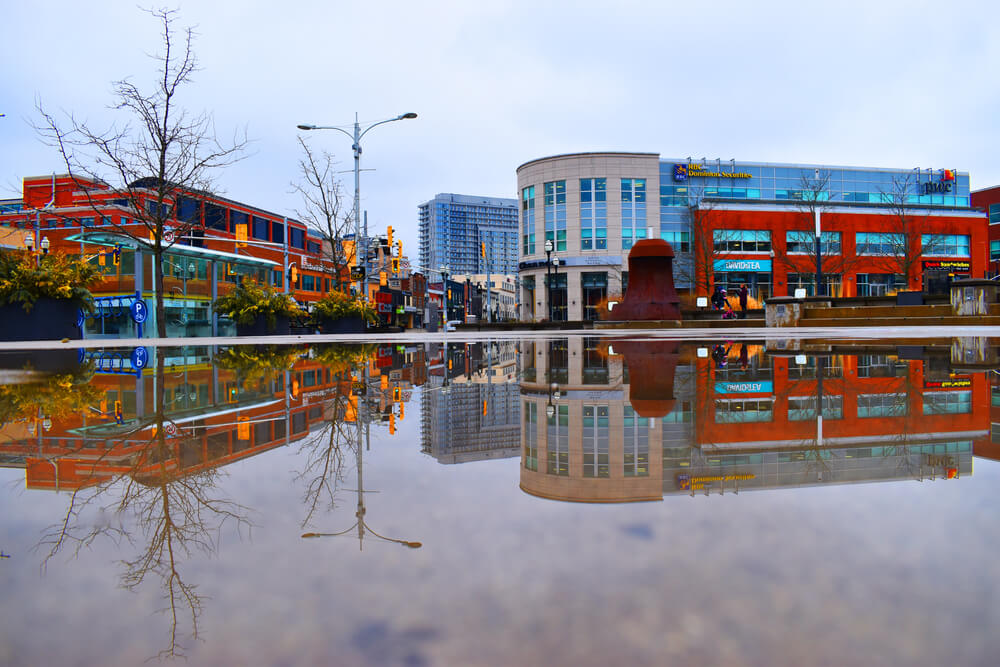 Rainy River is another city where you can look for residential property. However, the city is quite small, and finding properties for rent can take time and effort. However, several standalone houses are available for sale, and the average price is $334,329.

The city is quite close to Winnipeg, and it is a part of the US-Canada border. People are looking to buy a house in Rainy River as the cost of living is 37% below the average in Ontario.

Ontario is one of the most popular states in Canada. Hence, finding a good home at an affordable price might seem like a challenge. However, when you take a step-by-step approach to selecting a city and then look for real estate properties, you might find your dream home at a great price.

All the cities listed above provide a great standard of living and are safe for you and your family. You can chalk out a budget and choose a few cities out of the ones listed above to begin your house search.

Which Canadian City Has the Cheapest Houses?

Thunder Bay is the Canadian city that has the cheapest houses in Canada. The city has gained a reputation for having affordable houses, and the housing market of Thunder Bay is quite attractive. You can easily buy a house for around CA$ 258,738 in some of the most prominent locations in the city.

Which Province in Canada Has the Lowest Cost of Living?

In Saint John, New Brunswick, you may find the most affordable homes in Canada. With a CA$ 199,853 average property price, you're sure to discover something within your price range. If you're looking for a deal, look towards Saguenay, Quebec, where average real estate prices are only CA$206,242. Trois Rivières, Quebec, is another choice, with prices beginning at about CA$ 255,694.

Where Is the Most Affordable Housing in Canada?

Several cities in Canada are known for providing some of the most affordable houses. However, there are a few cities in Canada that have cheaper homes as compared to others.These cities are Regina, Saskatoon, Moncton, Winnipeg, etc. On average, the houses will cost you around CA$ 3,60,000 for all these locations. While these cities have cheaper homes, they are known for providing great job opportunities.

Are Houses Cheaper in Canada or the USA?

Are House Taxes Higher in Canada or USA?

The residential tax rates in Canada range from 0.29% to 2.77% based on the province where you buy a house. However, the average tax rate in the US is about 1.03% which varies from state to state. The highest tax rate is charged at 2.2% in New Jersey.