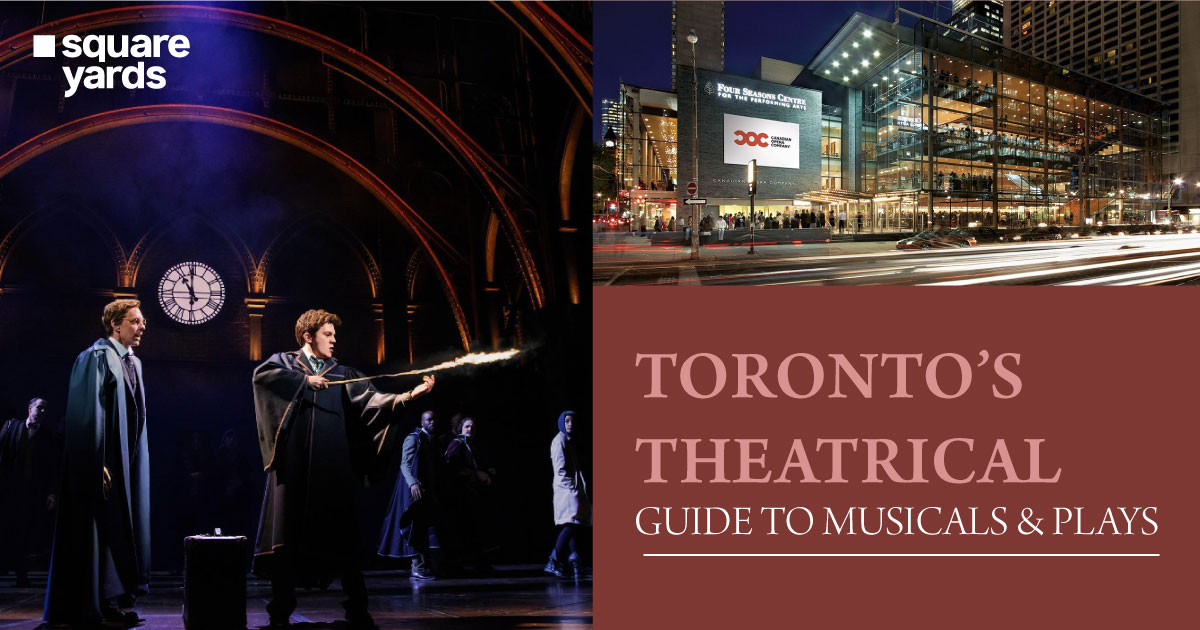 The Entertainment District in Toronto is what Broadway is for New York. It is the third largest English-speaking theatre district in the world. Over the past few decades, Toronto has gained a reputation for developing engaging productions, and today it is celebrated as best theatres in toronto

The thriving Toronto theatre culture nurtures new talent and community engagement. Tourists flock to Toronto to catch sights of Broadway-style musicals, plays or concerts and get dazzled by the artistic experience. This cosmopolitan city has so much to offer from popular musicals to hilarious live comedy shows and indigenous theatre! Read on to find more about the list of best theatres in Toronto!

Toronto’s Buddies in Bad Times Theatre is the world’s longest-running and largest queer theatre. Founded in 1979, buddies is a world leader in developing queer voices and stories for the stage. The company is built on the principles of queer liberation and supports artists and works who share a passion for theatre that celebrates difference. 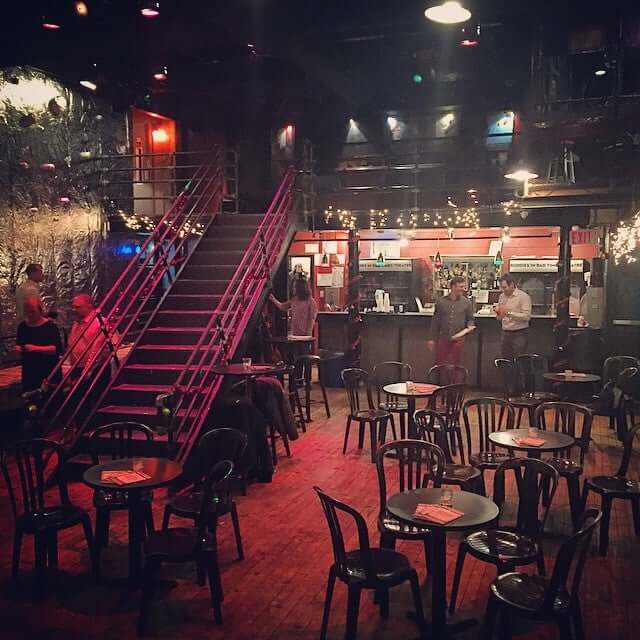 This unique theatre showcases ground-breaking performances by emerging and established LGBTQ+ artists. Located in the heart of Toronto’s queer village, it has

two stages: “The Big House”  seating up to 300, and a smaller venue, “Tallulah’s Cabaret”. Buddies has carved an influential place for itself among Canada’s theatre organisations through its artistic excellence and eccentric nature.

2. Young Centre For The Performing Arts

The Young Centre for the Performing Arts (YCPA) in the historic Distillery District is home to Toronto’s arts community and a destination for all theatre lovers. The centre is a result of a unique partnership between George Brown College and Soulpepper Theatre Company. One of the best theatres in Toronto, it was built into 19th-century-era Victorian industrial buildings is filled with theatrical performances, dance, music and poetry by the performers, students, and audiences. 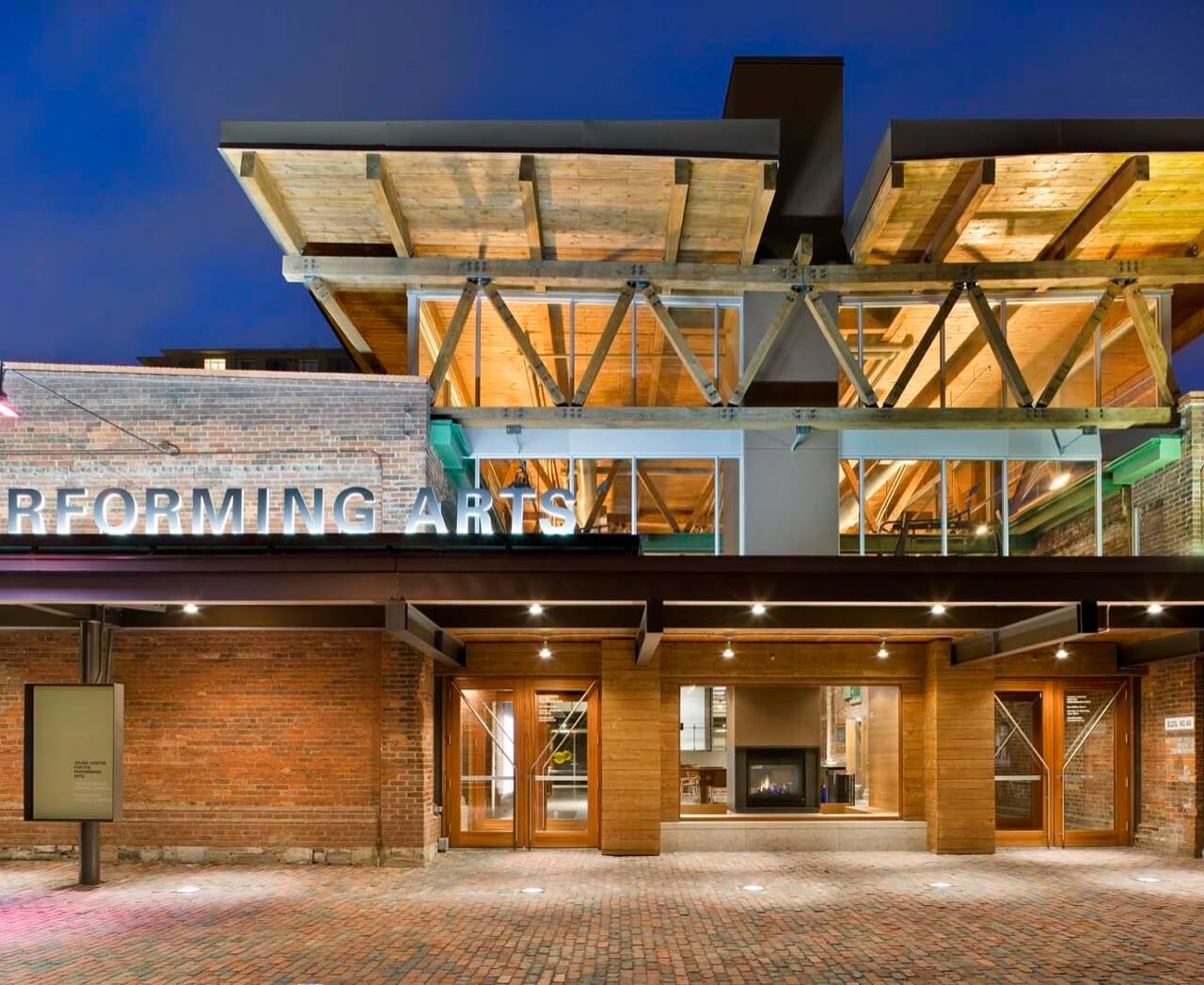 Originally constructed as a tank house, the building has been converted into a performing centre incorporating flexible, dedicated, indoor performance venues, an outdoor concert hall, an artist garden, studios, classrooms, and much more.

The overall design of the YPCA is characterised by a ‘raw warm industrial’ aesthetic that resonates with the ‘edge’ values of the new institution. If you reach before showtime, explore their in-house café, box office and theatre bookstore to enjoy the formal and informal atmosphere.

Aki studio is home to Native Earth Performing Arts at Dundas Street East in Toronto. Founded in 1982, Native Earth is the country’s oldest professional indigenous theatre company. As the name implies, Native Earth is committed to developing and presenting artistic expressions of in the Toronto theatre scene. 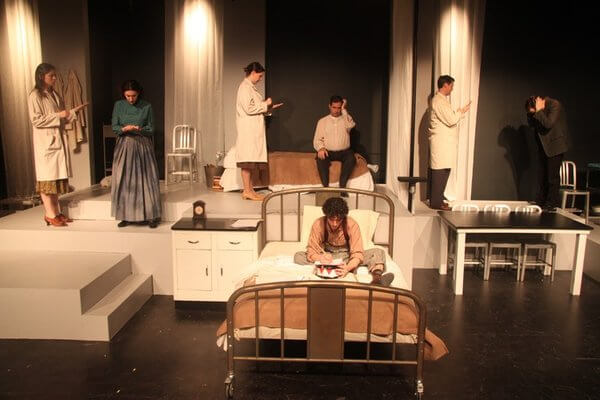 This 120-seat black box theatre has been host to many multicultural, and independent theatre companies and encourages national and international performing artists of all disciplines. Every year Native Earth celebrates the Weesageechak Begins to Dance festival that showcases Indigenous performing arts from across Canada and around the world.

Young People’s Theatre (YPT) is Canada’s oldest professional theatre for young people. For more than 50 years, the theatre has staged shows geared towards babies, children and the general youth. The building houses an 1887 heritage building in Toronto, Ontario. The original structure was a Toronto Transit Commission warehouse which later was renovated by Zeidler Partnership Architects and designed into the current-day Susan Douglas Rubes Theatre and a smaller studio- the Nathan Cohen Studio. 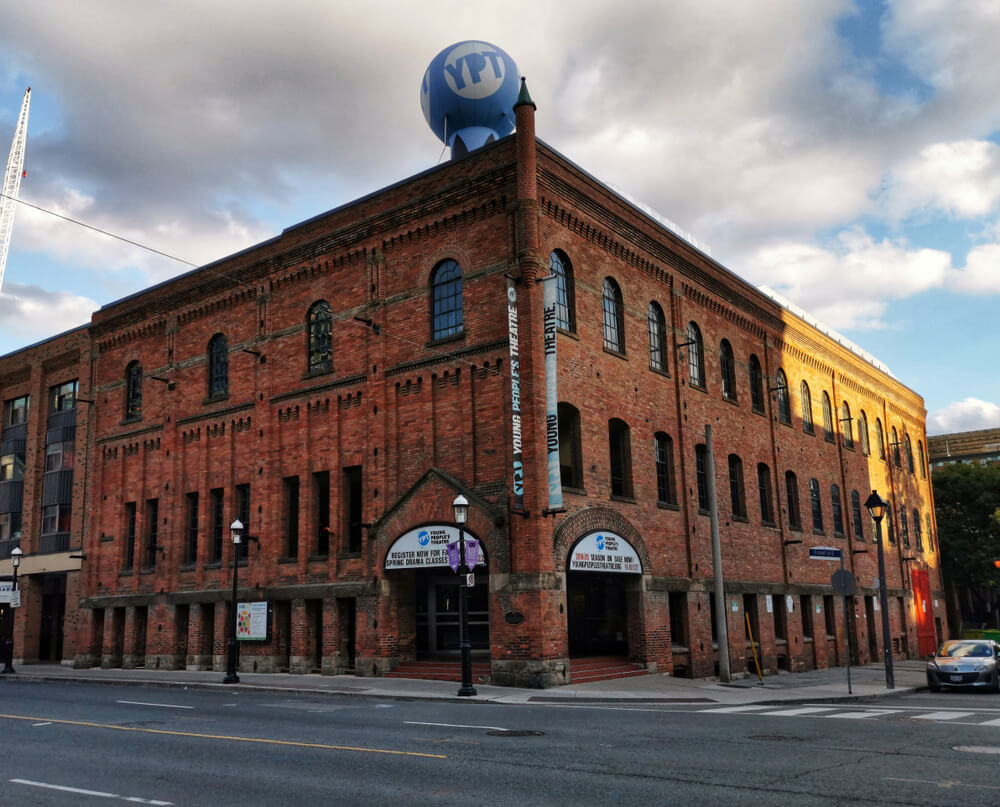 From classic plays to kid-friendly shows, YPT continues to bring out creative stories, for and about young people, to life. For more chuckle and chipotle, gear up to the YPT to enjoy an enthralling experience.

Factory Theatre is best theatres in toronto has been leading the Toronto independent theatre scene since its formation in 1983. This landmark structure comprises two buildings, both of which have heritage designation:  the original house was built in the Queen Anne Gothic style by Irish immigrant John Mulvey, and the other building that houses the theatre is an extension built by St. Mary’s Catholic Parish in 1910.

The theatre’s mission is to inspire and create awareness against social injustice and inequity. It has made it an artistic priority to invest in nurturing artists who are proud of their heritage and possess authentic theatrical voices. This playhouse pays homage to Canadian playwrights and for over four decades, has produced some of the finest theatrical works in the country.

In the month of July, it hosted the Toronto Fringe Festival welcoming over 80 companies from around Canada and over 1,200 artists participated in performances across the city that included comedy, drama, musicals, storytelling, dance, children’s theatre, and much more.

Founded in 1987, Canadian Stage is a leading non-profit contemporary performance company in the country. A fusion of dance, opera, film, music and theatre, the Canadian Stage reflects dynamism and complexity from Canada and around the world. This award-winning theatre delivers exceptional performances from artists and encourages partnerships between artists, communities, and organizations. 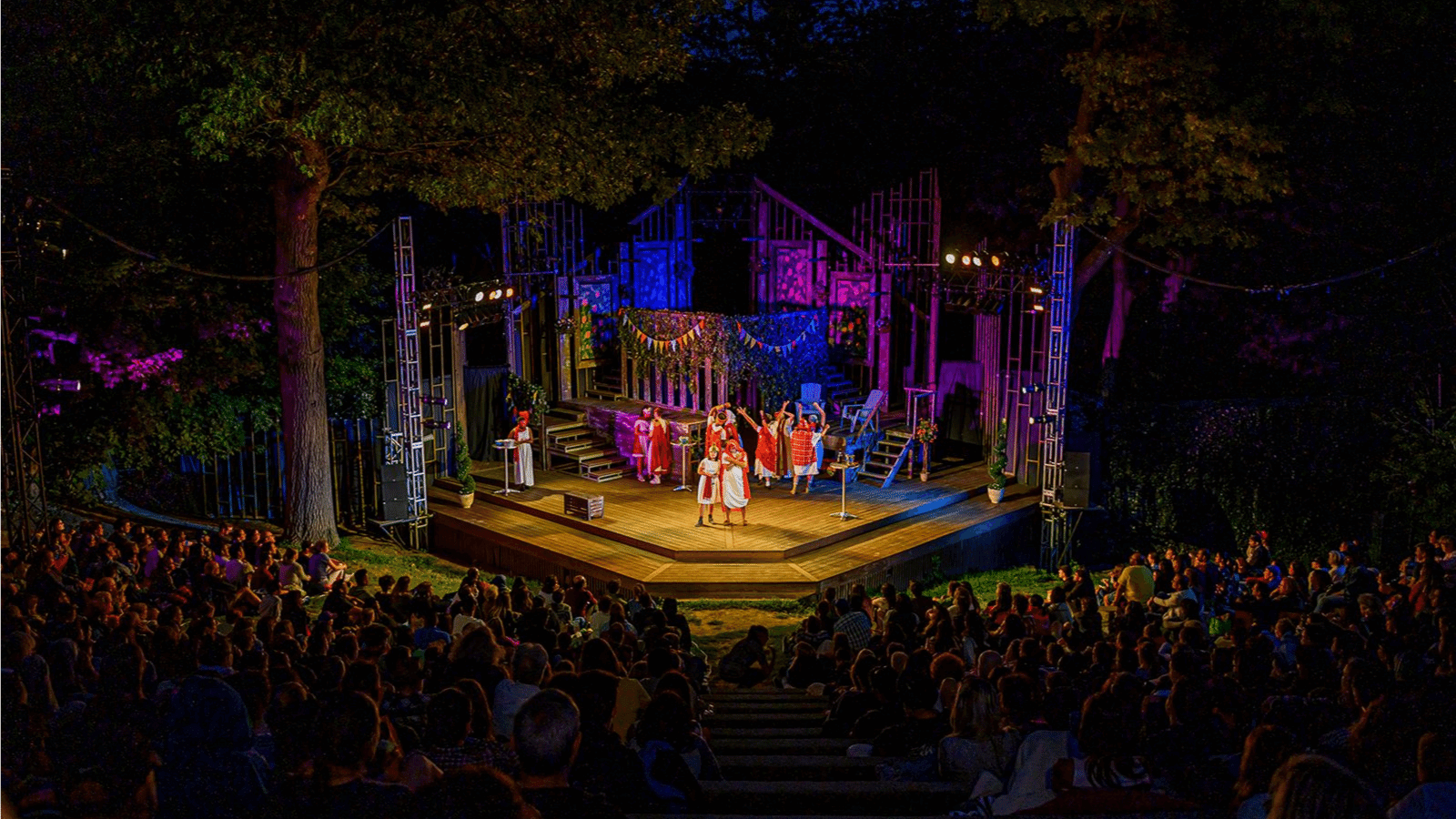 Every year Canadian Stage presents impressive joyful stories through blockbuster plays in their different venues scattered across the city: from the 876-seat Bluma Appel Theatre housed in the St. Lawrence Centre for the Arts; to two smaller stages ( Marilyn and Charles Baillie and Upstairs theatre) within the historic Berkeley Street Theatre; to the open-air High Park Amphitheatre. So, if you are in the city, make sure to explore the Canadian Stage to see up-and-coming acclaimed works from outstanding artists all over the world.

This historic landmark theatre, located in the heart of Toronto’s Entertainment District is the most well-known best theatres in toronto . Completed in 1907, the Royal Alexandra Theatre is a masterpiece of beaux-arts architecture that boasts the city’s first steel-framed structure. This momentous building has retained its 19th-century look both inside and outside. 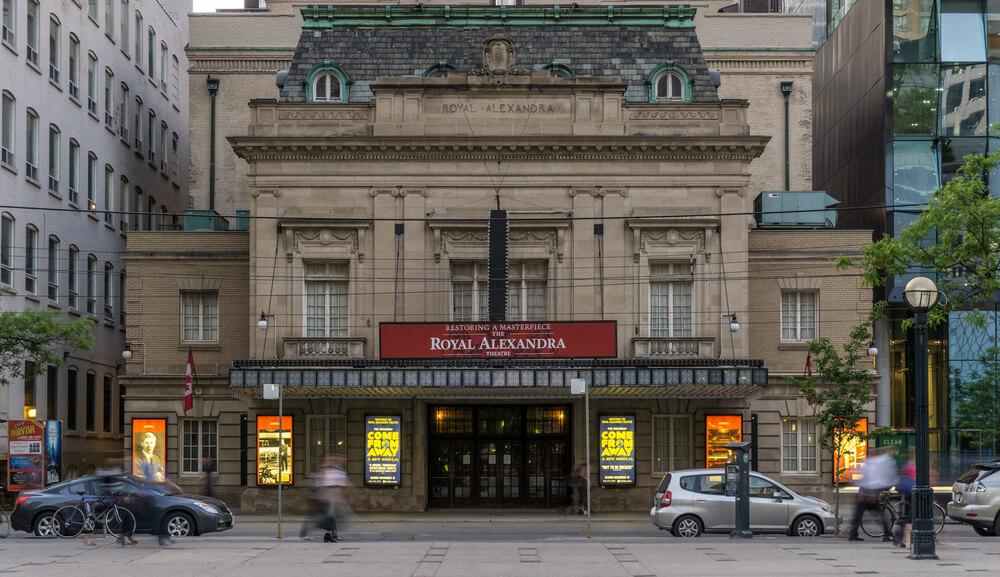 The theatre has hosted almost 3,000 productions since its opening and continues to play house concerts, comedy shows, and musicals with seating for up to 1500 patrons.  Stars like Orson Welles, Humphrey Bogart, Mae West and Edith Piaf has graced their presence on the stage with their remarkable performances. Popular musicals like Come From Away, Kinky Boots and Mamma Mia are the highlights of the Alex theatre.

The music and history buffs tail it over to the Royal Alexandra Theatre.

This award-winning theatre is one-of-the-kind in Canada, built specifically for opera and ballet performances. Strategically located in the heart of downtown,  Four Seasons is a vital addition to Toronto’s cultural scene. The building is in harmony with its context and innovative design. The 2000-seat, European horseshoe-shaped auditorium offers an exceptional auditory and theatrical experience for patrons. 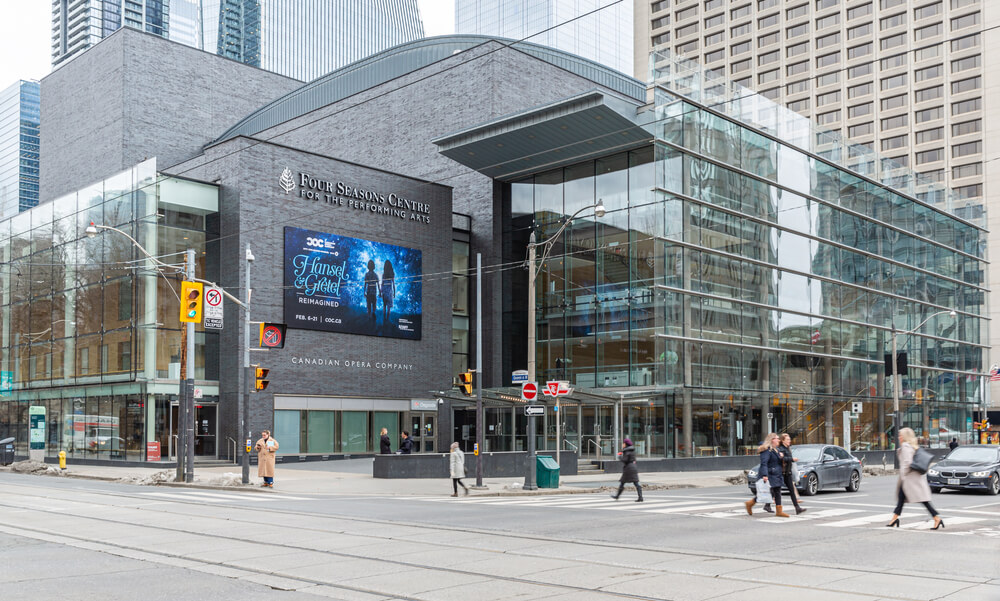 Built on the three principles- acoustics, intimacy, and elegance the opera house offers a full range of operatic repertoire, from pieces like Miss Saigon to some monumental works, such as Wagner’s Ring Cycle, which require an orchestra of over 100 musicians.

From historic YPCA theatre to Native Art performing centre, or award-winning Canadian Stage to ground-breaking Buddies in Bad times, Toronto’s theatres offer a wide spectrum of performed art, contributing to and shaping the rhythm of the city. These iconic theatres emphasise multidisciplinary work and host exceptional performances from Canadian and international artists establishing new relationships formed between the patrons and the city.

How many best theatres in toronto ?

Toronto has a diverse theatrical scene and third largest English-speaking theatre district in the world. There are around 187 theatres, including opera houses, clubs, and troupes for professional plays, comedy shows, and musical performances.

What do you wear to the theatre in Toronto?

Most theatres no longer have any specific dress code, so you can wear whatever you like. You can dress casually or formal, as per your preferences.

How many seats are in the Royal Alexandra theatre?

Royal Alexandra is a historic landmark theatre in Toronto, North America. It is built around three sections- the Orchestra, Balcony and Upper Balcony and has a capacity of 1258 seats.

Where can I see a play in Toronto?

From Broadway Shows, Musicals, Plays and Concerts, Toronto has a thriving cultural theatrical scene that celebrates the performing arts and artists around the world. Some of the landmark theatres are Buddies in Bad Times Theatre, Canadian Stage Company, Factory Theatre, Princess of Wales Theatre, Royal Alexandra Theatre, etc. these theatres host several festival and events each year and nurtures new talent and community engagement.

« Buying a Vehicle Out of Province: Do’s and Don’ts
5 Iconic Architectural Buildings in Calgary, Canada »