Calgary is a cosmopolitan city in western Alberta. Calgary owes its quick development to the oil sector. A stunning skyline and several Calgary attractions invite millions of tourists every year. However, it continues to be deeply rooted in western culture, giving it the moniker ‘Cowtown.’ Every July, the Calgary Stampede is a large festival and rodeo that began as a farming display and has grown into a major event.

Besides being known as Cowtown, the city has a plethora of quirky and uber-cool-designed architectural skyscrapers and buildings. They come under a list of Calgary attractions, and they never seem to disappoint.

Let’s have a look at some of Calgary attractions that speak for themselves! 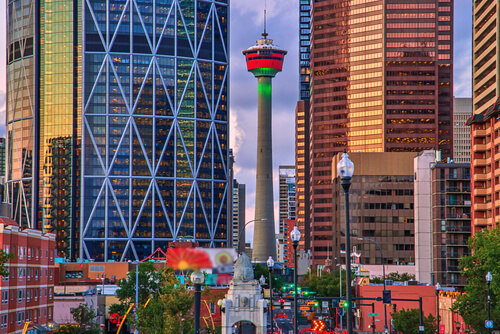 As a joint venture between Marathon Realty and Husky Oil, the Calgary Tower was once known as the Husky Tower. It was built in 1967 to celebrate Canada’s centennial (100 years) and to promote the downtown area as part of a Calgary urban renewal initiative.

The Calgary Tower is a sentimental landmark in the city’s downtown area. It is considered the Olympic torch symbolism of 1988. Since it was created and constructed between 1967 and 1968, the design has a mid-century look. Although many brand-new, contemporary structures are taller and, some could argue, ‘more intriguing,’ it is believed that the Calgary Tower is a treasure worth seeing. 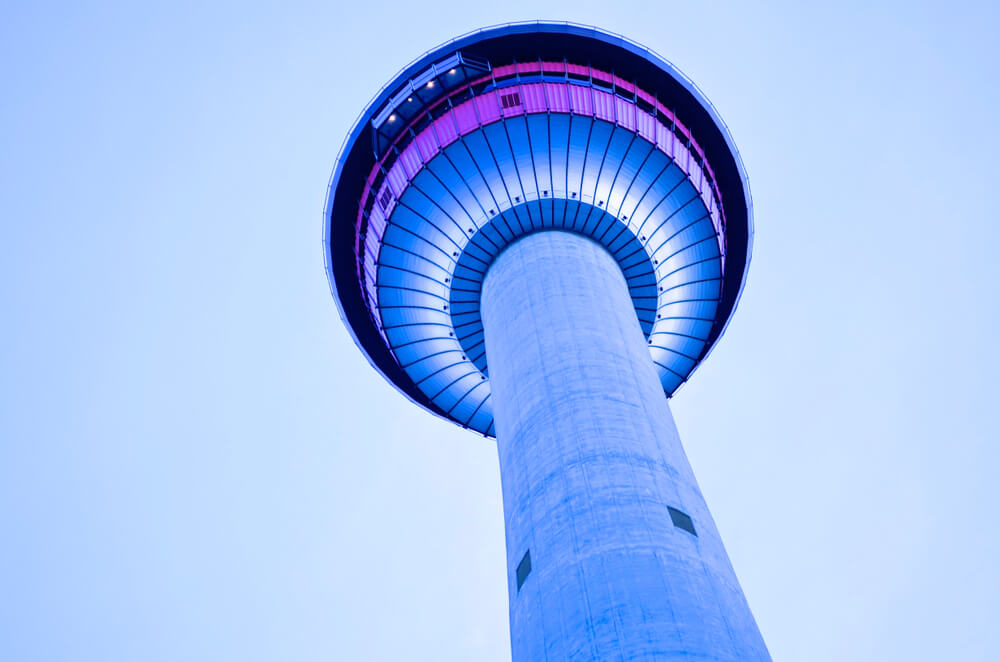 Even though it was for a brief period, the Calgary Tower was the tallest building in Canada and the tallest observation tower in the western hemisphere, standing at 191 metres. When you walk up the first flight of stairs, you reach what the Calgarians jokingly refer to as the ‘bat cave,’ which is nothing more than the hollow inside of the tower’s concrete shaft. Two high-speed elevators in the Calgary Tower can transport 15 people to its superstructure in 62 seconds at a speed of 2.5 metres per second. The tower’s central column is highly flexible and can oscillate up to 16.5 cm in the wind.

To commemorate Alberta’s centennial, the glass-floor deck of the Observation Deck was added in 2005. It looks thrilling yet heart-wrenching for some. The 18 glass panels that make up the glass viewing platform each weigh between 200 and 225 kilos and can hold the weight of two hippos. Test your bravery and stand on the glass floor looking down at the traffic on 9th Avenue! 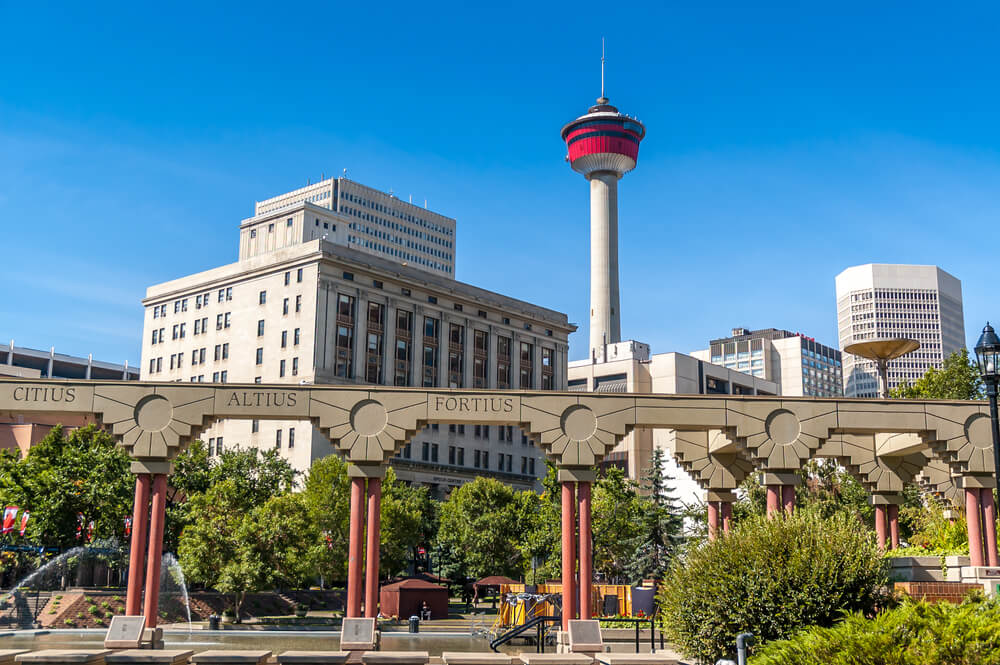 The Calgary Tower’s hours of operation depend on the season. One can visit the tower in the following months at the times mentioned below – 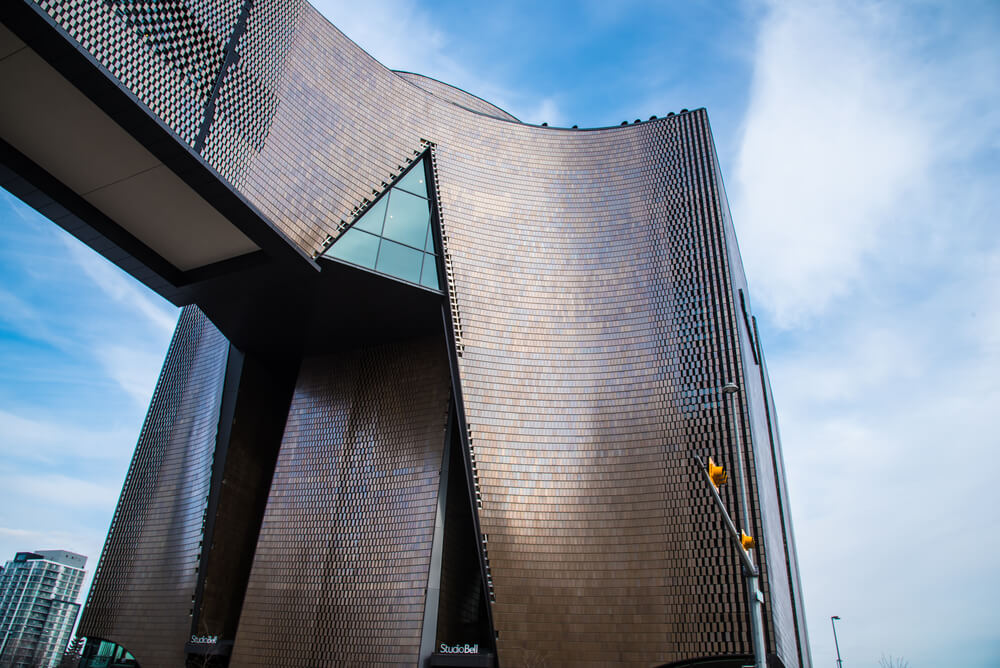 Studio Bell, the National Music Centre, the first of its type in North America, is a significant, cutting-edge cultural hub. The curvature of the building’s design, created by Allied Works Architects, is modelled after the free-flowing motion of musical notes, instruments and Calgary’s native scenery.

Due to the restoration and incorporation of the King Edward Hotel, also known as King Eddy, Studio Bell, the National Music Centre, is a magnificent architectural work with a rich history. The architect, Brad Cloepfil, discusses how the handmade terra cotta tiles that make up the facade required labour-intensive procedures for each tile. The complex brick masons’ work from the early 20th century brings to mind. Soothing organ music can be heard throughout the entire structure, which was constructed by Cloepfil for acoustic sound propagation as you ascend upward.

The structure provides facilities for recording, editing, performing, exhibiting, and instructional activities related to music. The building has many vessels that work together to create marvels of light, space, and music. These vessels are connected by an intricate metal framework and an earthen tile exterior.

This Calgary attractions is a hub for musical history, hands-on displays, and halls of fame. There are five floors dedicated to celebrating Canadian music, including a vocal booth where you may mix your track and view stage costumes worn by well-known Canadian performers. Along with a 300-seat performance space, there are three recording studios for an artist residency programme.

It offers an interactive barn dance where guests may try their hand at creating cowboy attire or writing a country song. One of the places to visit in Calgary is Studio Bell, the National Music Centre, where music enthusiasts can delve into a musical realm of oblivion and exploration.

Calgary attractions, Studio Bell, is now open to the public from Thursdays to Sundays from 10 am to 5 pm. 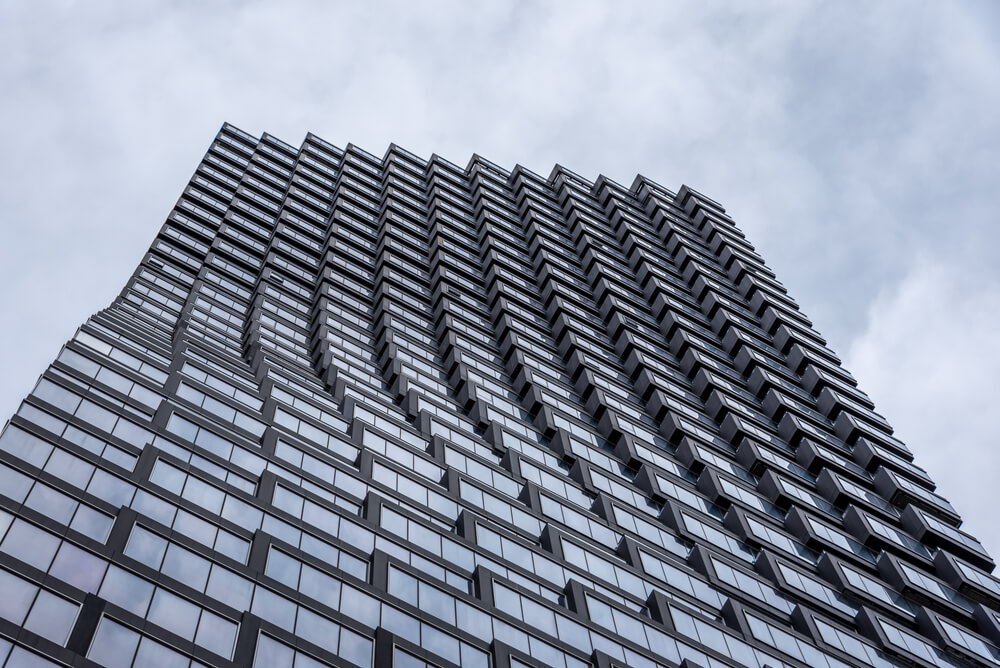 The Telus Sky Tower is a piece of art and is at the top of the list of places to visit in Calgary. Telus Sky Tower’s skyscraper’s curve was designed following the top floors designated for residences only and office buildings on the lower floors. Gleaming glass façades for the workplaces give way to prominent balconies for the residences. The tower features 56 storeys, with 26 floors assigned to work and retail spaces.

The structure was built to replace the Art Central Building, which was later demolished. As a result, the tower’s ground level features a gallery to display the artwork of artists as well as shop space for retail purposes. When combined, these three different types of mergers give character and personality to otherwise dull corporate workplaces. 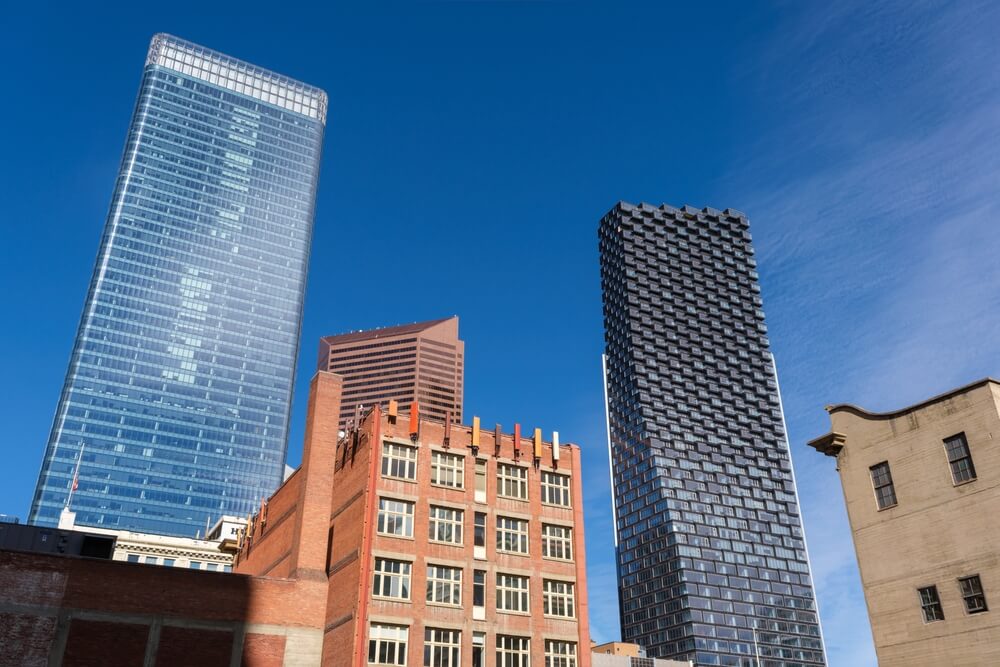 The Telus Sky Tower illuminates at night with an LED public art lighting installation, which is the highlight of this Calgary attractions. This architectural marvel was built to bring finesse and add a wow factor element to Calgary’s other bland-looking office buildings. The silhouette, made up of logical straight lines combined to form a feminine figure, depicts the combination of the two applications in a single action. The residences are nothing less than a luxury. They are made for the comfort of a home with the flexibility of hotel service.

The Telus Sky reminds the Calgarians of a huge unstable Jenga, but it’s stable and strong as it is! 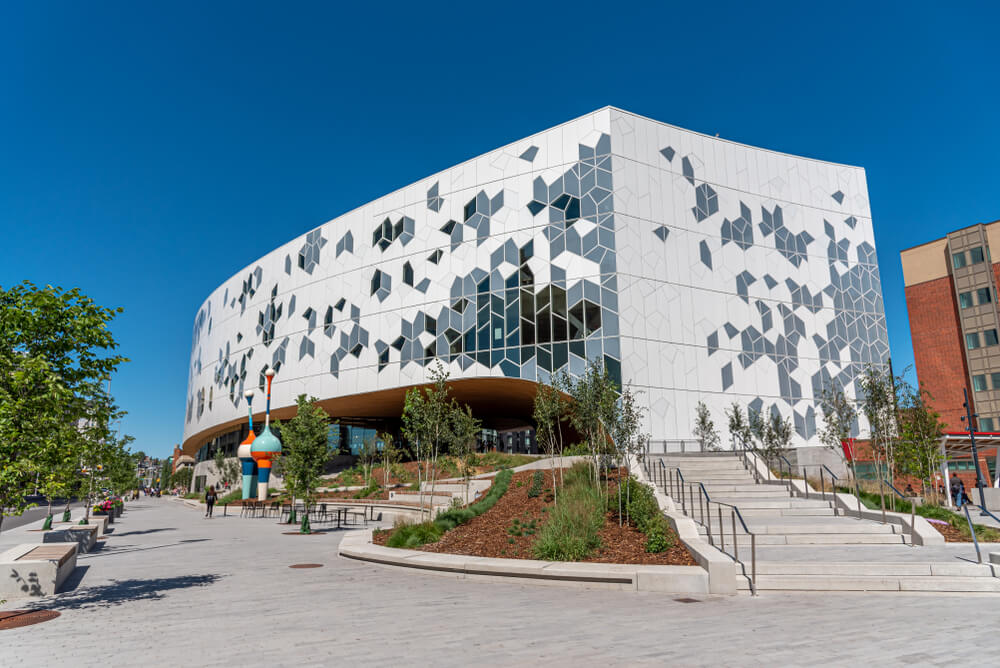 The Central Library has become a vital centre for ideas, education, and social interaction. The structure is a tribute to the skilful planning and design work done by the City of Calgary, their collaborators, and the Norwegian architectural firm, Snhetta. For decades, the Central Library’s impact will be felt throughout the design industry. Every Calgarian is proud to humblebrag about this Calgary attraction and iconic landmark. The library benefits people of all ages, including young children, college and school students, and seniors. This stunning piece of architecture may be appreciated from all angles and perspectives, even by architecture enthusiasts.

The Central Library of Calgary is situated on top of a light rail transit line that is fully operational. The building is opened out in all directions by the main entrance, which is raised over the line through sloping terraces. As a result, the gateway serves as a bridge, reviving the connection between the two communities and allowing for visual and pedestrian access across the property. 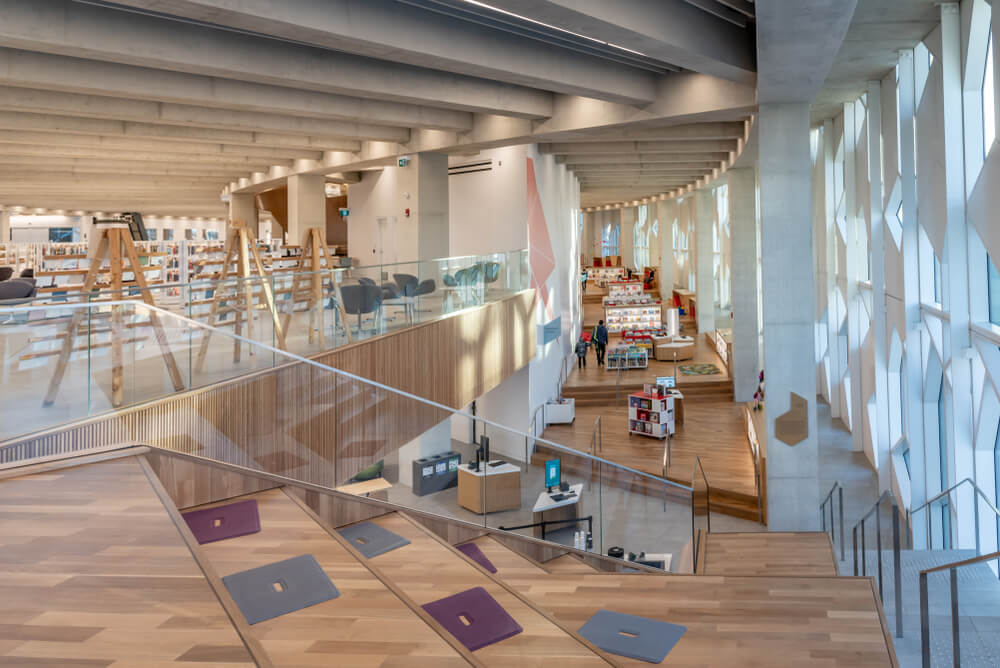 The library features numerous programmes arranged on a scale from lighthearted to severe. The library offers a comprehensive, accessible space for residents of all age groups, ranging from multipurpose rooms on the bottom floor that improve the flow of the building to quiet study and research facilities on the upper levels. Inside, public and private study spaces are made possible by translucent and opaque perforated glass panels that are embedded in a strikingly textured façade. 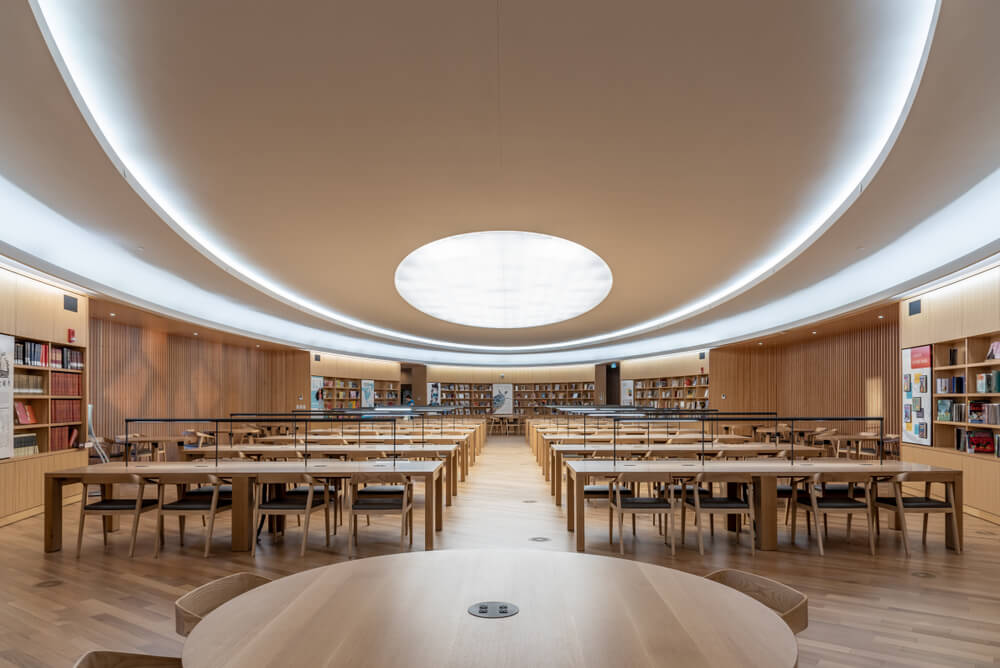 The Central Library’s operational hours differ on weekdays and weekends. The timings for the library are given below – 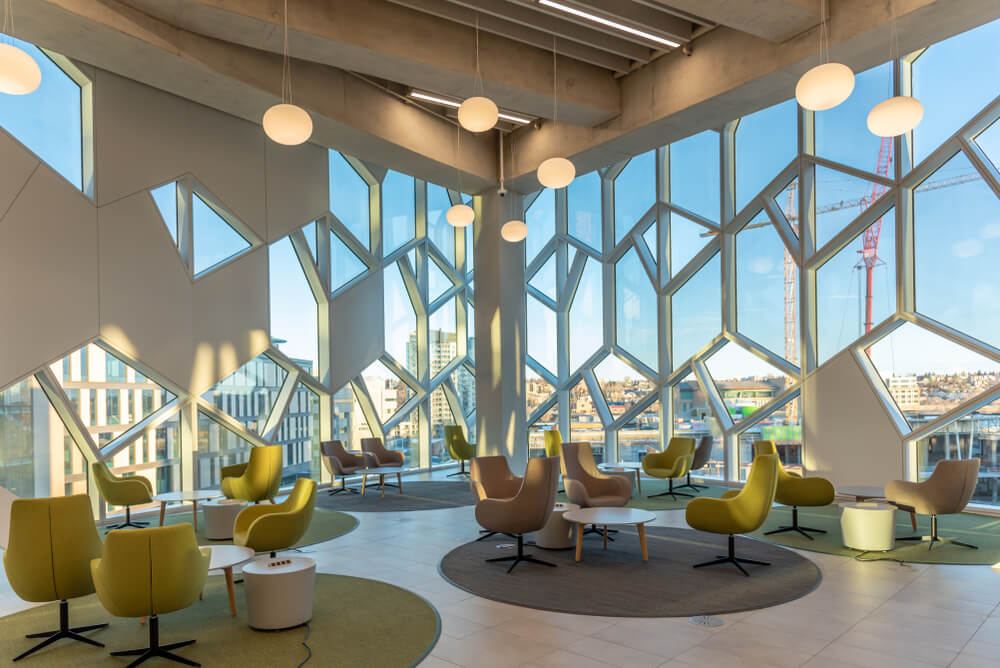 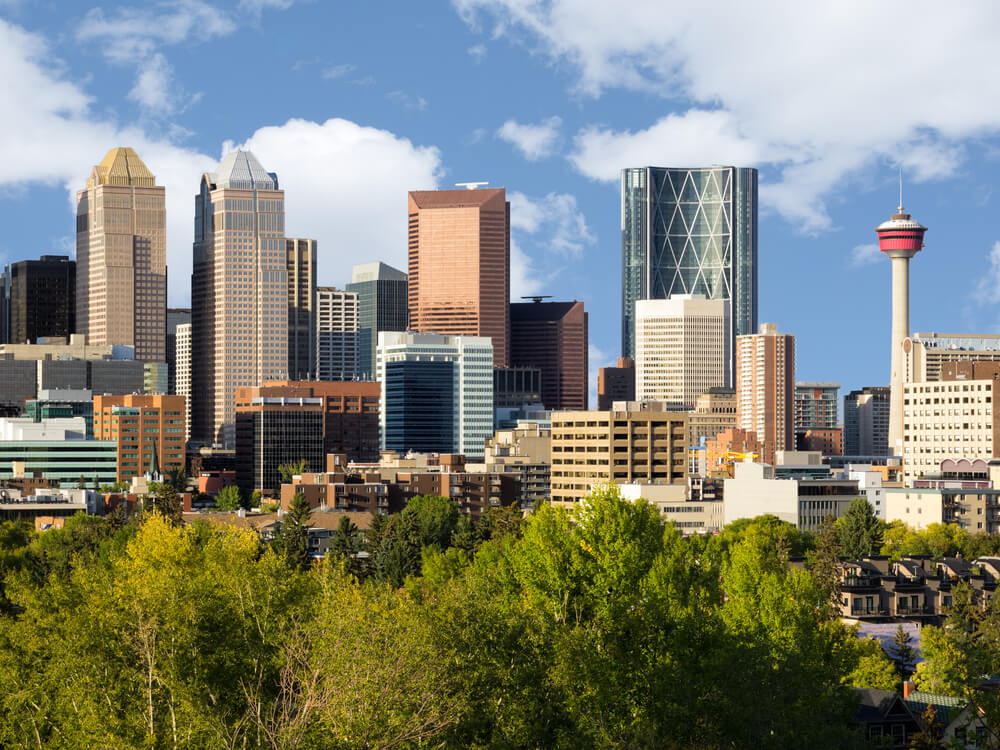 The Bow, Calgary’s second tallest tower, was created by the renowned international architecture company Foster + Partners in 2012. The building’s convex design deflects winds from the north, while the south facade folds inward to maximise the heat and daylight received by the structure while also optimising views of the Rocky Mountains for the office units. 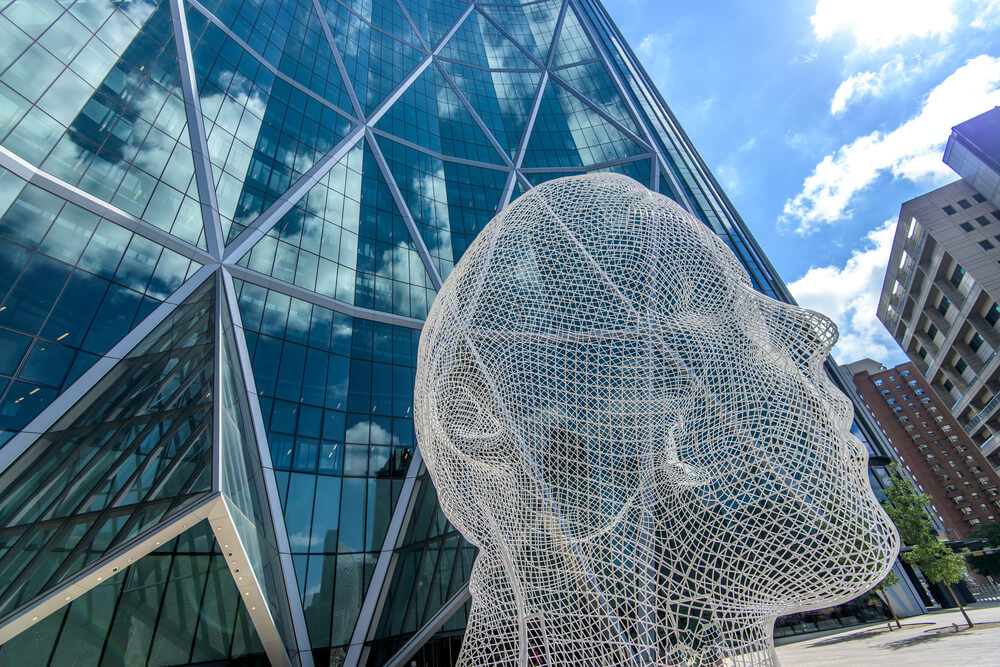 The shape of the building was developed via climate-responsive design research. Additionally, the convex facade reduces wind load, which reduces the strain on the towering steel structure. The facade’s curve is displaced, resulting in a sequence of atria that runs the length of the entire structure. These act as climatic buffers to shield the building and reduce energy use. The project made important architectural and programming decisions on the ground floor, which hosts a few cafes, eateries, and retail stores that flow into the spacious green plaza.

On the skyline of Calgary, Foster + Partners created an impressive new icon. However, it is impossible to miss the enormous head facing south if you drive by or stroll through The Bow building. This Calgary attraction features a 12 m tall metal rod creation called ‘Wonderland,’ created and designed by Barcelona-based artist Jaume Plensa. It looks even better at night when it is completely illuminated. This definitely should be on the list of places to visit in Calgary. However, the building is not open to the public, but you can still marvel at the structure and the art installation on the outside.

These are a few of the most iconic buildings in Calgary. The city is filled with quirky yet significant architectural pieces that one can marvel at. The Calgary attractions are much more than the native scenery or the Rocky Mountains; they define the culture and history of Canada and Calgary in particular.

Next time you plan a trip to Canada, remember these spectacular places to visit in Calgary. Not without a good cup of Timmies (Tim Hortons’s coffee)!

What is the oldest building in Calgary?

The Hunt House, one of Calgary's oldest structures, is a modest log cabin that was constructed between 1876 and 1881. It is a remarkable historical building in Canada and a part of Calgary's historic district.

What was the first skyscraper in Calgary?

What is the name of the big tower in Calgary?

The big tower in Calgary was called Husky Tower, but the structure was renamed Calgary Tower in 1971 as a tribute to the Calgary citizens.

Why is the Calgary Tower flame lit?

The natural gas flame, initially delivered to the city in 1987 as the Calgary Tower Olympic Flame soon before the 1988 Winter Games, has subsequently evolved into a shining symbol atop the tower commemorating significant events in the city.

How fast does the Calgary Tower spin?

The restaurant level at the Calgary Tower, upon opening in 1968, became Canada's second rotating restaurant. The floor turns 360 degrees during lunch and dinner every 45 minutes.

« Toronto’s Best Theatres that You Cannot Miss!
Are You Struggling with Getting a Driver’s License in Ontario? »