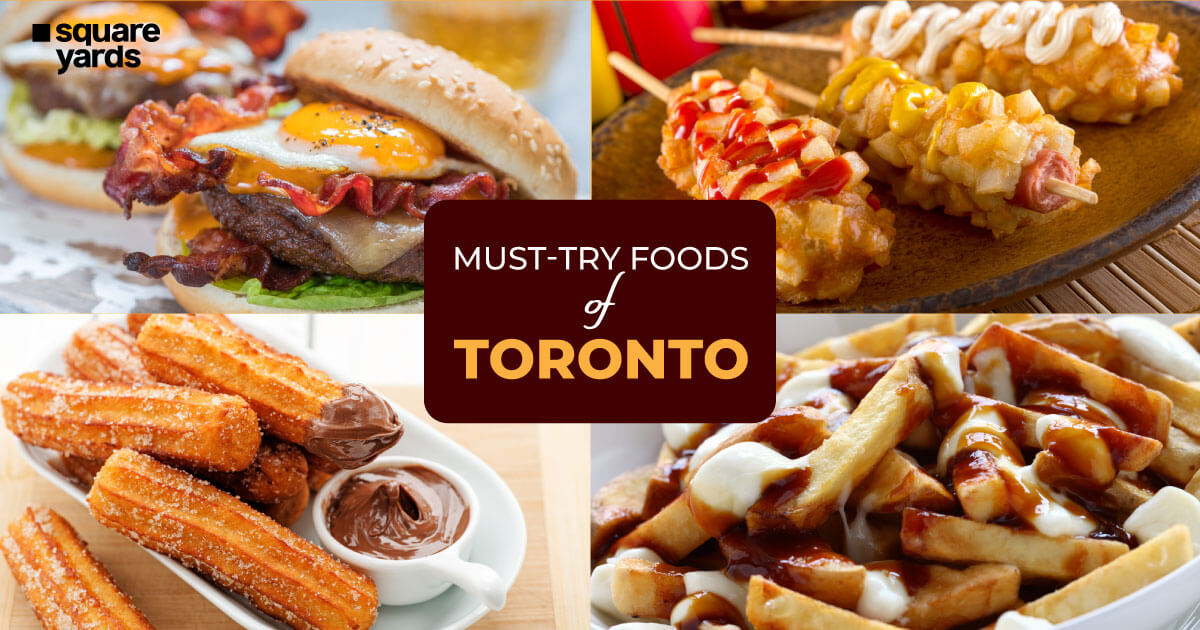 Food is a major part of popular culture. In the age of food blogging, food enthusiasts have found an opportunity to try new cuisines every day. The best aspect of travelling to Toronto is the opportunity to try different types of dishes and flavours of Canada. Almost every state prepares and serves food differently, and Toronto is no exception. There are many cultures in this city, making it one of the most multicultural cities in the world. Every day there is a new food item on the market, whether you are looking for the world’s cheesiest cheese pull or cookies you can drown in. From the most bougie restaurant chains to the quirkiest stalls, here is the best food in Toronto. Toronto food showcases food trucks, breweries, pubs, fine dining and even market stalls. Brace yourselves as we will take you through a journey of must-try food in Toronto. We just hope it doesn’t tempt you too much to book the next flight here!

Best Food in Toronto that has been called the national dish of Canada lives in people’s hearts rent free. Poutine is prepared by combining fresh french fries topped with gravy and cheese curds. It is only becoming more and more popular by the day, and many joints are coming up with novel ways to create something unique with poutine. the Enchanted Poutinerie, located at 730 Wilson Avenue, North York, ON, Toronto, serves several varieties of poutine. The most famous and blog worthy items that should be on your must try food in Toronto list are the Unicorn Poutine with multi-coloured gravy and the Lobster Poutine—with Prince Edward Island lobster, cheddar, mozzarella, and hollandaise sauce. Enzo Cammisuli and Carmine Riossi, the founders of Enchanted Poutinerie, also serve chicken nugget poutine, gnocchi poutine—with deep fried gnocchi, shaved parmesan cheese, tomato sauce and parsley, and vegan burger poutine with vegan cheese, beyond meat patty, vegan gravy, dijon mustard, ketchup and horseradish.

As the name suggests, this is a place called Junked Food Co. that will let you experience eating out of a bag. Sounds weird? It won’t when you come to know what’s in it. You get a bag of Doritos, topped with onions, lettuce, tomatoes, olives, cheddar cheese, jalapeño, chilli sauce and sour cream. a package of crunch, cream and freshness doesn’t sound too intimidating now, right? That’s a smash bag! which will make you disregard your gym trainer. One of Toronto’s coolest catering kitchens, with all food mashups and treats. Junked Food Co. also offers smash bags topped with poutine, chicken, pulled pork, and cheddar mac and cheese.

Corndogs have taken social media by storm. The Korean wave has given us another amazing food item that doesn’t only look bomb but tastes like a stick of dynamite. A corndog is a Korean snack which is prepared by deep frying a battered and bread-crumb-wrapped hot dog, which is then topped with sugar and any sauce that you like. Chung Chun Rice Dog is a massive Korean chain which has expertise in one thing only: Korean-style corn dogs. It is an international brand, with more than 200 locations around the globe.

Unlike the traditional batter, they make their glutinous rice dough fresh every day, and the batter goes through 2 hours of fermentation. Their menu consists of the All Cheese Dogs, Chungchun Original Dog, Gamsung (which is also their best seller), Ramen Chip, Veggie Dog and even a Chocolate Dog, with a myriad of sauces and bits to top it off with. So this automatically gets promoted to your must try food in Toronto list.

Those craving something sweet in Toronto should head to one of Pancho’s Bakery’s two locations for freshly-fried churros, you can find them at Dufferin and Bloor and Kensington Market. Here, rich fried dough bars coated with cinnamon and sugar are stuffed with fillings ranging from condensed milk to jam. Chocolate is especially delicious. The bakery also sells churro cones, churro loops, rainbow grilled cheese sandwiches, churro cakes and a variety of other Mexican baked goods.

It is not uncommon to see dessert pizzas with Nutella and cream cheese or melted chocolate. Well, we must tell you, Lammana’s does not serve ordinary desserts! This Toronto food place, Lammana’s, serves a huge slice of pizza with any topping you can think of! This epic slice comes topped with desserts, from doughnuts to pumpkin pies, cookies, and hot dogs on request! Dessert pizza is a must try food in Toronto and deserves a place in the Hall of Fame. Lammana’s even serves gelato pizza. Isn’t it bonkers? Italy might not approve of this, but we do! Don’t we?

What options do you have when Anthony Bourdain tells you to eat the peameal bacon sandwich? This food item is Toronto’s iconic food for a reason! The goal here is to bring out the bacon’s saltiness and smoky goodness of the meat straight into the mouths of its hungry customers. Nothing more, nothing less there are more such juicy and spellbinding sandwiches that will make you want to come back for another bit. Find the food joint at Carousel Bakery, St. Lawrence Market.

Plant-based cuisine allows you to make a healthier choice for yourself and the planet. With the idea of creating balance with vegan food, their restaurants are scattered all over Canada with 5 spots that are: LOV Centropolis, LOV De La Montagne, LOV DIX30, LOV King West Toronto and LOV McGill. it is important to experience their brunch menus, which seem to be a popular choice today. LOV also offers cocktails, beers and takeout beverages for those on the go.

A vegan start-up and now an empire, “Planta” by Chef Davis Lee, was launched as a Yorkville location back in 2016, which is now the second Asian focused menu eatery on Queen Street. They also have a branch of Mexican food with Planta Cocina. The location is purely vegan and promotes finding versatility in using plant based elements. the most popular dishes at the restaurant are watermelon poke, coconut ceviche, 18 carrot dogs, Habibi salad, Beauty and the Beet (cocktail), vegan burgers and their sushi platters. Their step towards reducing the carbon footprint with not only the food but also their packaging has made it so popular amongst youngsters. You can find them in Yorkville, the Entertainment District and the Financial District in Toronto.

If you want to have one of the best cookies in the world, come here to taste your cookies at Foxies Bake Shop! Give your tongue a taste of their 4 ounce stuffed cookies that have been in existence since 2018. we don’t think there is any doubt about why they are a must try food in Toronto. Their store is located at 669 Mount Pleasant Road in Toronto, ON. cookies always have our hearts, but this special place, unfortunately, is only accessible to people in Canada. This teamwork, headed by two sisters, delivers fresh cookies all over Canada. Must try their Cinnamon bun stuffed cookie topped with Cinnamon toast crunch, Smores cookie and Nutella Cookie.

What is the main dish in Toronto?

Toronto is a hub of diverse cultures and communities. People come from all over the world to study or settle in the city. The most popular Toronto food, which is also called—The national dish of Canada i.e Poutine. In Canada, one can find poutine in different varieties and ingredients.

Are there vegetarian food options available in Toronto?

Yes, there are several vegetarian and vegan restaurants that one can find in Toronto. Indian food especially is a very popular choice and is one of the must try foods in Toronto.

Are there restrictions on foods sold in Toronto?

There are no such restrictions in Canada under any federal legislation such as the Health of animal or plant act.

Toronto Condo To Be The Tallest Residential Tower in…