Best Bridges in the City of Toronto 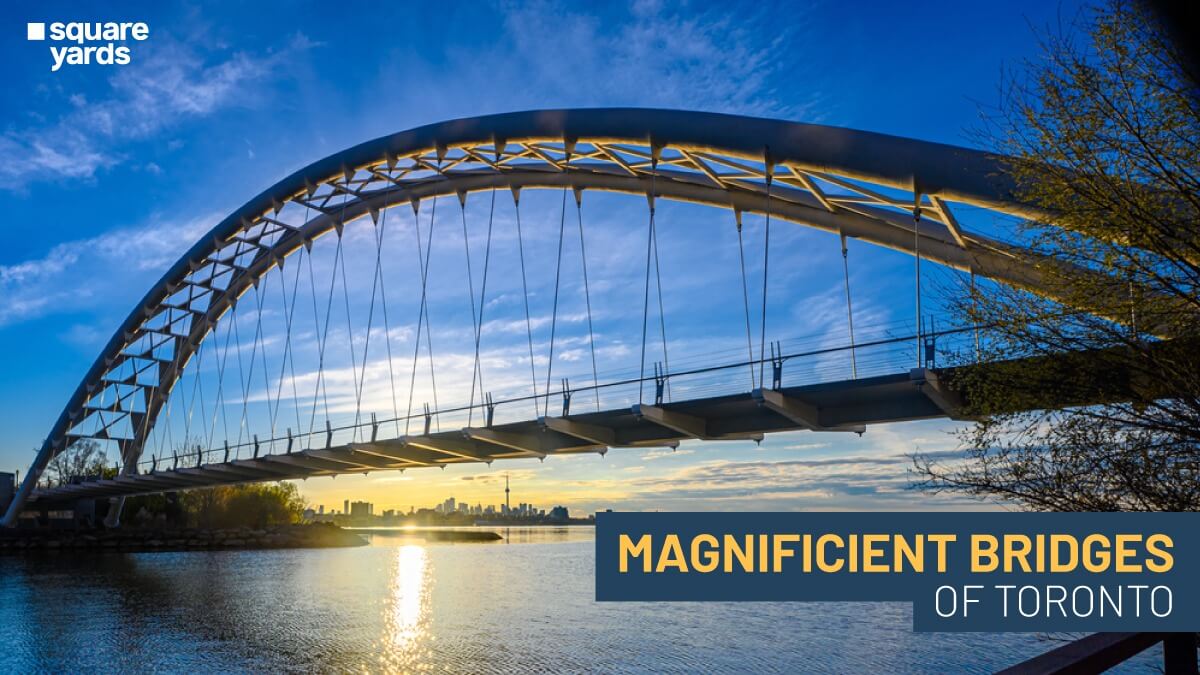 The City of Toronto homes a diverse assortment of bridges that accentuates the city’s architectural magnificence. These bridges in Toronto signify the mix of its riveting past and vibrant present. It makes space for modern architectural marvels while simultaneously possessing viaducts that exhibit its rich cultural history. Bridges in Toronto exemplifies its picturesque landscapes and covers all the significant points in the city, binding its diverse population from all walks of life. They also act as tourist attractions owing to their exquisite designs. The portfolio of best bridges in Toronto is as distinctive as they come, from their utility to design. These bridges will take you past some of the city’s finest sceneries.

The Finest Five of Toronto Bridges

The city of Toronto has no shortage of breathtaking bridges that accentuate its alluring architecture. From the magnificent arches of the Humber Bay and Yellow Bridge to the old-school viaducts signifying the colonial footprints throughout the city. Toronto also provides a platform for contemporary artists to incorporate their modern sensibilities to produce designs that offer us a glimpse of the future of pedestrian architecture in the cities. Find below the five best bridges in Toronto revered by commuters and tourists alike. 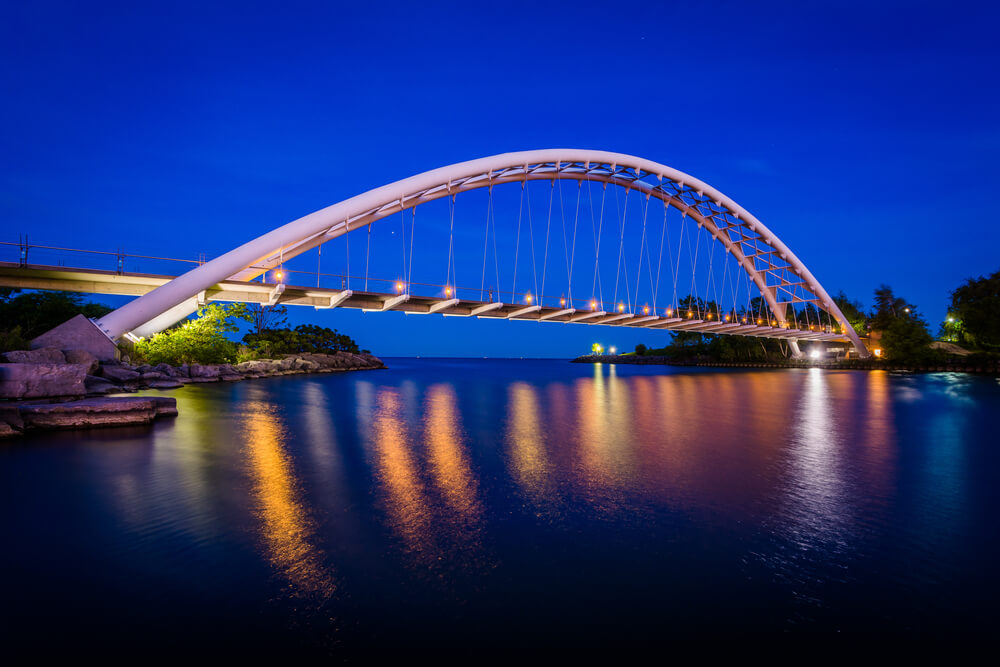 Recipient of numerous engineering, design, and architectural awards, Humber Bay Arch Bridge in Toronto is a modern adaptation of the historic trading route crafted by the Aboriginals. This arch Toronto bridge is located at the epicentre of the Humber River and is a favourite among pedestrians and cyclists. The Montgomery Sisam Architecture of Toronto co-designed the iconic twin arches and the 44-stainless steel hangers along with Delcan Corporation.

The minimalist design provides shade to its commuters as they walk, cycle or rollerblade across the 456 ft long bridge. Built-in 1994, the bridge connects the iconic waterfront trail. The Toronto side, known as the Martin Goodman Trail, is the busiest route among pedestrians and cyclists. The bridge’s charming aura makes it a hotspot for street and wedding photography. People also visit this bridge to relish the scenic sunset over Lake Shore Boulevard. 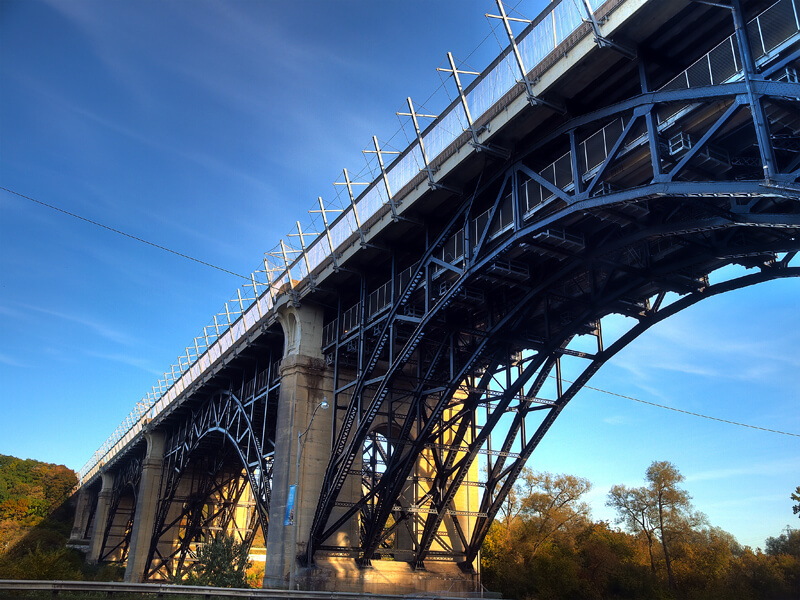 This bridge in Toronto employs a Truss Arch Bridge system to connect the Bloor Street East on the West Side to Danforth Avenue on the East. The 1,620 feet long bridge was designed by Edmund W. Burke. The five-lane roadway links the Broadview Station in the east to the Sherbourne station in the west as the concrete-steel arch bridge stands 40 meters above the Don Valley. The bridge was met with a lot of scepticism upon its ideation before it was opened to the public in 1918 on account of its low population at Danforth.

It was mockingly called “the bridge that goes nowhere.” But it soon became instrumental in the exponential development of the portions located on the east side of Don Valley. This bridge also boasts many pop-culture mentions as it has been featured in numerous films and music videos and continues to inspire the artists and architects in Toronto.

This Bridge in Toronto has been reconstructed at least three times, with its earliest version being a wooden bridge built-in 1803. However, the bridge was transformed into a Steel Truss Bridge in 1912 by Cleveland Bridge and Engineering Company. Six steel brands were used during its construction which was unprecedented at that time. This bridge carries vehicles and streetcars of the Toronto Transit Commission over the Don River. In the 1990s, the bridge was revamped, and public art was included.

Artworks by Eldon Garnet showcased a clock without its mechanisms and hand were installed, and the phrase “this river I step in is not the river I stand in” from the Greek philosopher Heraclitus was carved in big letters on the bridge. The art on the bridge is a part of three site art pieces spread across the city of Toronto. 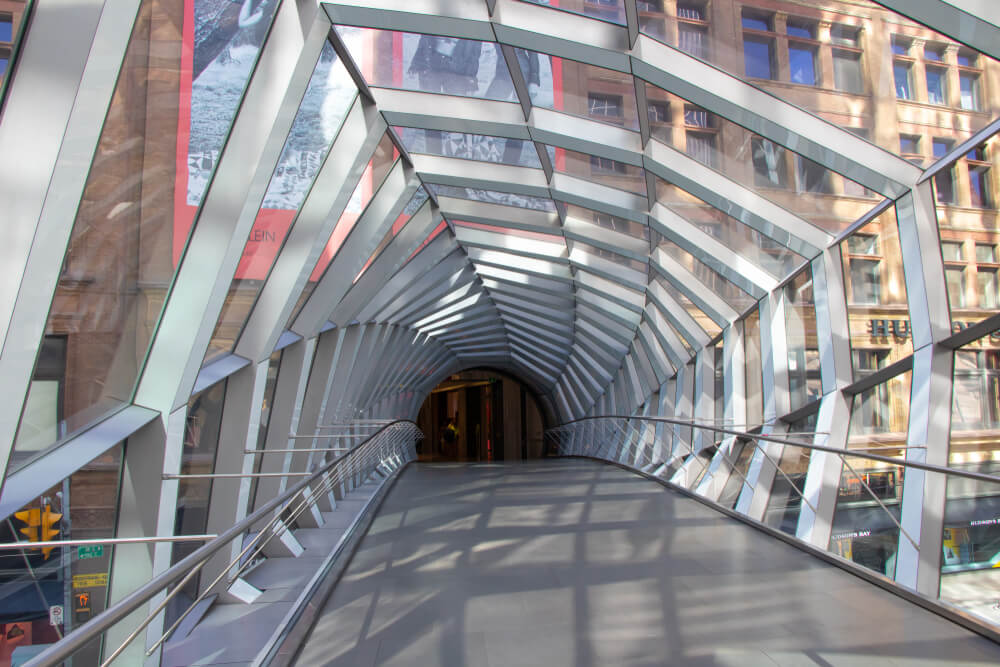 This bridge in Toronto exhibits the developments in the construction and installation of modern pedestrian infrastructure. The staggering glass tube was conceived as a handshake between two contrasting architectural styles. It links the circular arches of the Hudson Bay Facade with the rectangular forms found at the Eaton Center. The bridge transitions its geometrical shape at each endpoint, augmenting the architectural design of the two major landmarks it is connecting. A team of designers, architects and consultants from North America and Europe employed 200 brass, and 355 slumped glass panels to construct this alluring passage.

To minimise disruption on Queen Street, the team assembled the bridge on James Street, located nearby. After the assembly, specialised hydraulic lifts were utilised to hoist the bridge into its designated space. The team engaged with specialist subcontractors to construct a series of mock-ups where the intricate information of the bridge could be analysed. Along with the design, the installation of the bridge has also been regarded as a prodigious feat as the team had minimal clearances from the Hudson Bay and Eaton Center. 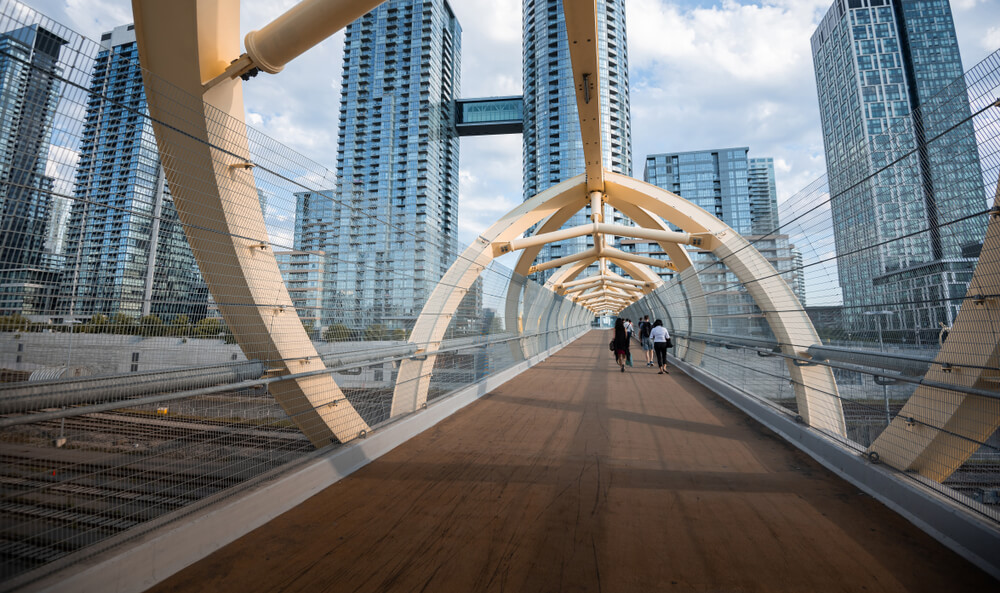 Constructed in 2011, Puente De Luz, translated to the “Bright of Light”, is a stunning 125-meter-long bridge for pedestrians. Chilean artist Francisco Gazitua conceptualised the bridge design that connects the neighbourhoods of Concord City Place and Front Street West. The designer and his team were selected for the assignment after winning the competition organised by the Concord Adex Developments. This bridge in Toronto is also called the Yellow Bridge among its commuters due to its distinctive yellow curved arches.

The Yellow bridge stretches across the busiest railway corridor of the country as it connects densely populated areas of King West residential and the entertainment area located in the north. The bridge also accommodates cyclists and adds a distinct flavour to the vibrant streetscape of the city of Toronto.

The above-mentioned bridges in Toronto should be checked off your bucket list when planning your next rendezvous across the city. It is a must for architecture aficionados and tourists to visit these architectural marvels. History buffs would also be interested in absorbing the rich history of the city planning, which shaped the prominent neighbourhoods of Toronto. The city also showcases a beautiful compilation of pedestrian bridges.

They also provide an appealing ambience for your next social media post and give a safe platform for commuters to indulge in recreational activities. Make sure to navigate through these infrastructural wonders as you soak in the grandeur of what the city has to offer.

Which is the largest bridge in Ontario?

The Eagle Canyon Suspension Bridge is the largest in the region of Ontario. It hangs above 152 feet from the ground and is spread across 300 feet, attracting thrill-seekers from all over the country.

Where is Canada's most popular bridge?

The most popular bridge in Canada is the Capilano Suspension Bridge in British Columbia. Towering over the Capilano River, this suspension bridge boasts a footfall of 1.2 million tourists per year.

Does Toronto have bridges?

Yes, the city of Toronto has a diverse assortment of bridges spread across the city, connecting its population while simultaneously adding richness to its vibrant streets and landscapes.

Which is the longest bridge in Canada?

Located at the heart of the majestic canyon, The Eagle Canyon Suspension Bridge is the longest walking bridge in Canada. The rustic ambience and natural serenity surrounding the place enthral the visitors to partake in the exhilarating experience.

What is the Leaside Bridge famous for?

The Leaside Bridge in Toronto that towers over the Don River are famous for its record-breaking construction span. The Truss Bridge linking the town of Leaside to the Borough of East York was built and completed in just ten months.

« Tenant Rental Problems : Who is Responsible for Troubles in Your Rental?
Explore 10 Secret Places to Visit in Ontario in Summer »

Tushar Gautam Tushar Gautam is a Content Writer who has had the pleasure of writing for diverse mediums and topics. You’ll find him planning an itinerary for his next trip in his spare time, which may or may not come to fruition.

Tushar Gautam Tushar Gautam is a Content Writer who has had the pleasure of writing for diverse mediums and topics. You’ll find him planning an itinerary for his next trip in his spare time, which may or may not come to fruition.
sticky-form