A Guide to the Best Places to Visit around Niagara Falls 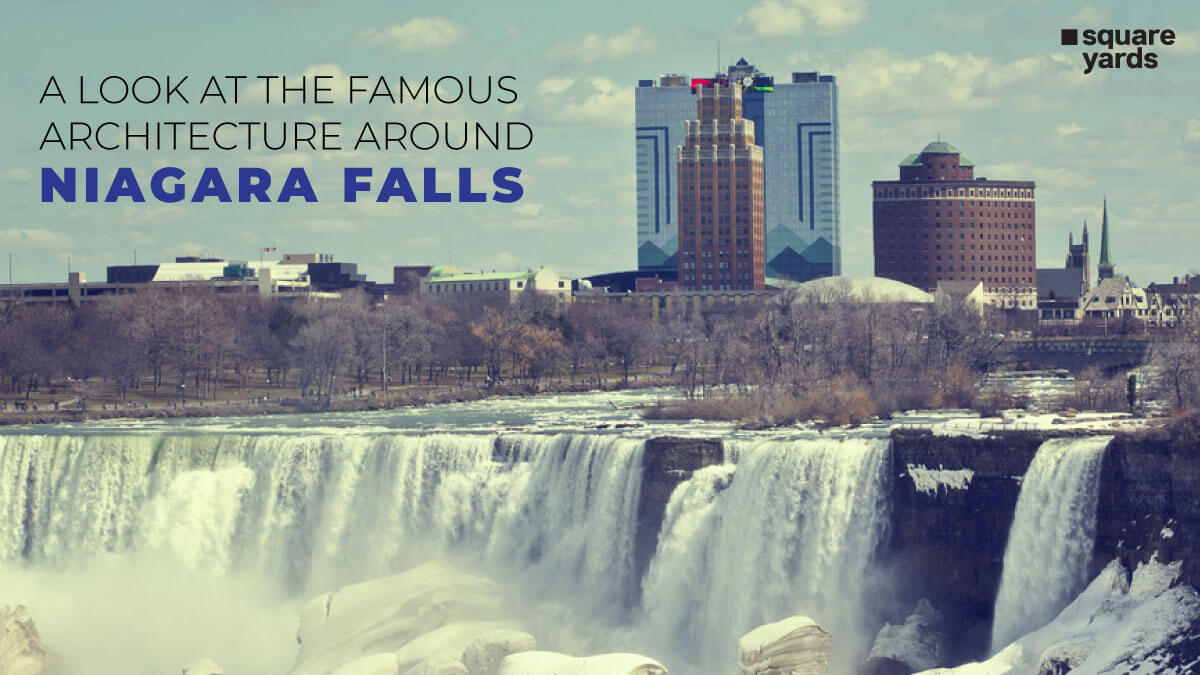 Niagara Falls Attractions is a wonder of nature. Its mighty waterfall and stunning gorge views have fascinated humans for centuries. If you have not visited the falls yet, you should plan a trip immediately. It will give you a new perspective on how small we are and how mighty nature is. Here is a list of the best places to visit around Niagara Falls. All of these are historical structures that have connected the falls to civilisation in a powerful way. 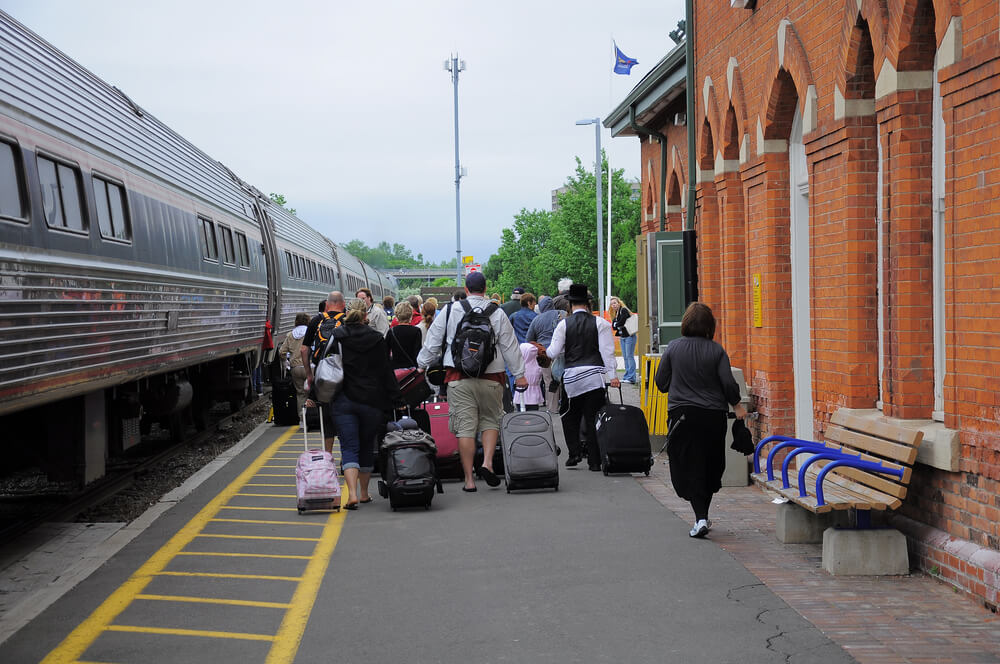 Niagara Falls Railway Station in Ontario is Canada’s oldest gateway to the world-famous outlets Niagara Falls. It is a Victorian Gothic Revival Style building that was opened in 1879 as the terminus for Great Central Railway. The station was renovated in the year 1951, and since then, it has maintained its look and feel.

Niagara Falls Station is made of red bricks and was initially designed by Joseph Hobson, the Chief Engineer for the Great Western. This Niagara attraction has been synonymous with Canada’s geography, economy, and demography expansion. The building was named a heritage site in 1994.

Niagara Falls Station receives only one daily round-trip train from GO Transit Lakeshore West Line on the weekdays. On weekends the number of trains is 4 in each direction.

Clifton Hill is probably one of the most famous streets in the world. It also goes by the name ‘Street of Fun’ and connects River Road to Victoria Avenue.  Clifton Hill is home to many restaurants, hotels, wax museums, video arcades, and the world-famous Ripley’s Believe It or Not.

Clifton hill as a piece of property has seen many owners from as early as the 18th century. Even today, businesses are frequently sold and renamed by all types of business owners. The most prominent attractions on Clifton hill are Niagara Skywheel and Ripley’s Believe It or Not! Museum, Louis Tussaud’s Waxworks, The Great Canadian Midway Arcade, and more.

Today, the Zimmerman Fountain is a popular Niagara attraction that pleases locals and tourists of all age groups with its beautiful coloured lights, colourful flowers and, of course, the soothing aura of the fountain. 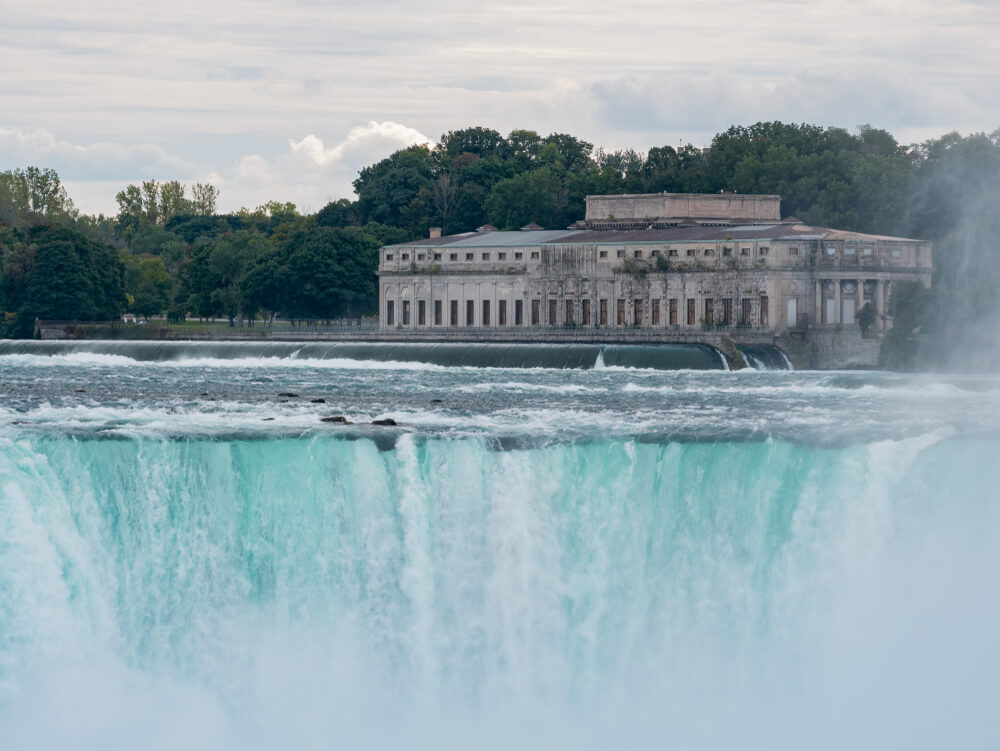 Toronto Power Station stopped its operation in 1974 and was declared a Historic Site in Canada in 1983. It is highly acclaimed by the Canadian people for its contribution to the country’s business, industry, and technology development. The building is also well known for being the first purely Canadian-owned power facility at Niagara Falls. 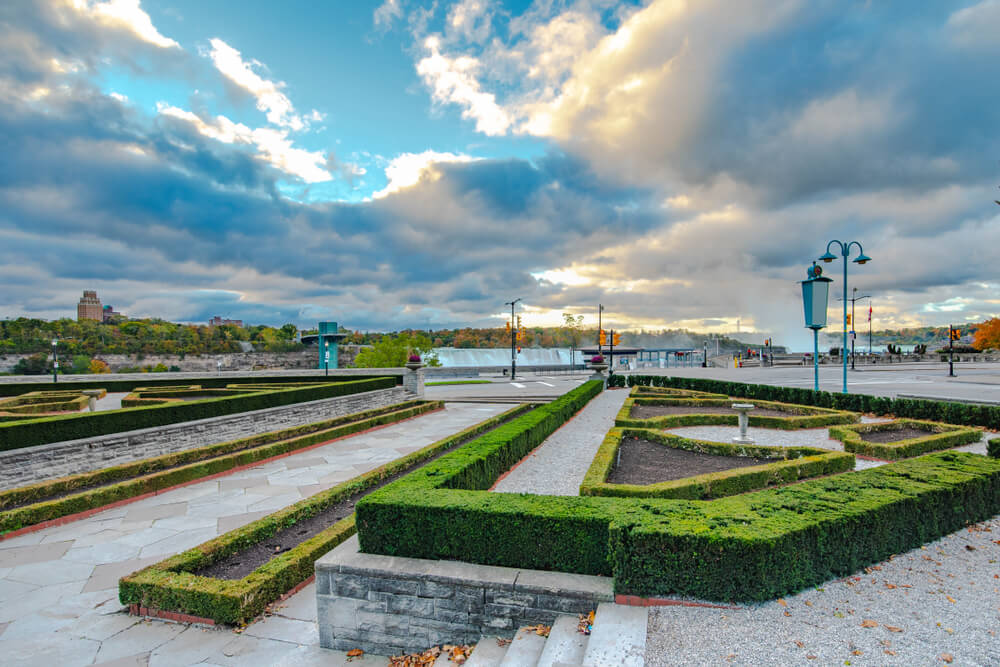 Oaks Garden Theatre is a beautiful curved garden at the entrance of Queen Victoria Park. This park is located at the foot of Clifton Hill and perfectly showcases Niagara Falls. This is the place to be if you are looking for stunning panoramic views of the American Falls and the Horseshoe Falls.

Oaks Garden Theatre was built in the year 1936 on the naturally curvy landscape of the area. The key idea was to create a curved pergola that overlooked a central amphitheatre. This Niagara attraction garden consists of beautiful shrub borders, rock gardens, and Queenston limestone pathways and ornate iron gates. Must visit spot? The wishing bridge on the Lily Pond. 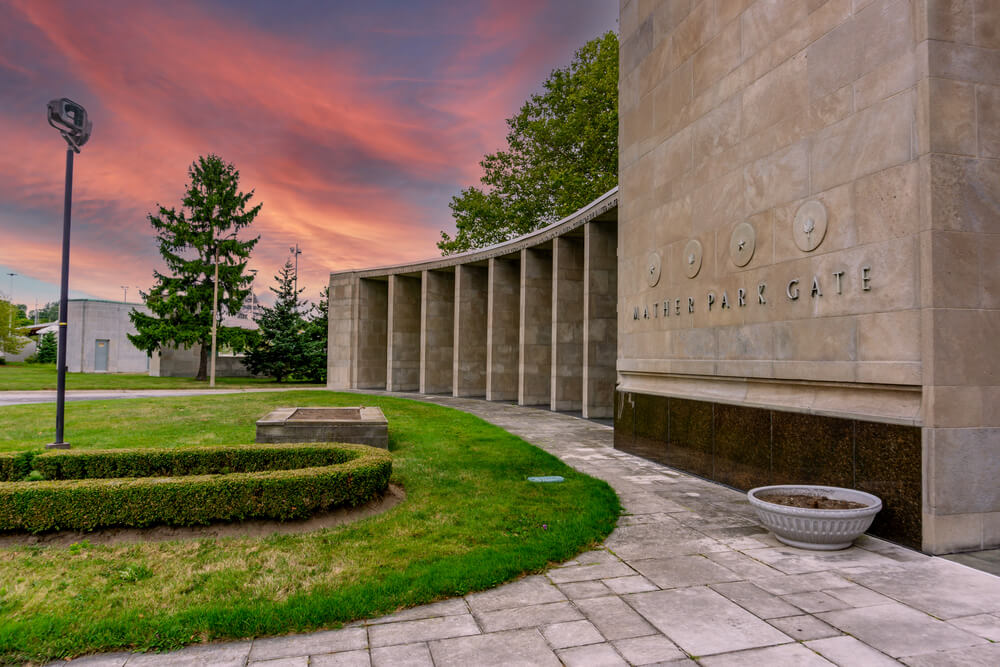 Mather Arch is a towering limestone arch in the centre of the Mather Arch Park in Fort Erie, Ontario. This arch was built in 1939 by the Niagara Parks Commission as a tribute to the friendship between Canada and the United States and is one of the many famous Niagara Falls buildings. It is also looked upon as a grand gateway to Canada. At the east of the Arch is a Cenotaph dedicated to the Fort Erie veterans of World War I, World War II, and the Korean War.

Mather Arch is popular among tourists and locals for its beautifully manicured gardens. It is a perfect place for wedding photoshoots and outdoor celebrations.

Want to set your eyes on some Tudor-style architecture near outlets Niagara Falls? Visit the Stone Mansion called Oak Hall. It was the home of mining tycoon Harry Oakes and was built in the late 1920s. This beautiful stone mansion has 37 rooms spread upwards over three stories.

The Niagara Parks Commission purchased Oak Hall in 1959, and was subsequently opened to the public in 1966. Visitors can now tour the Great Hall Reception Area, the Dining Room, and the Living Room. There is also a collection of art related to Niagara Falls. The building also houses the offices of the Chairman and General Manager of the Commission and the Commission’s Information Technology Manager. 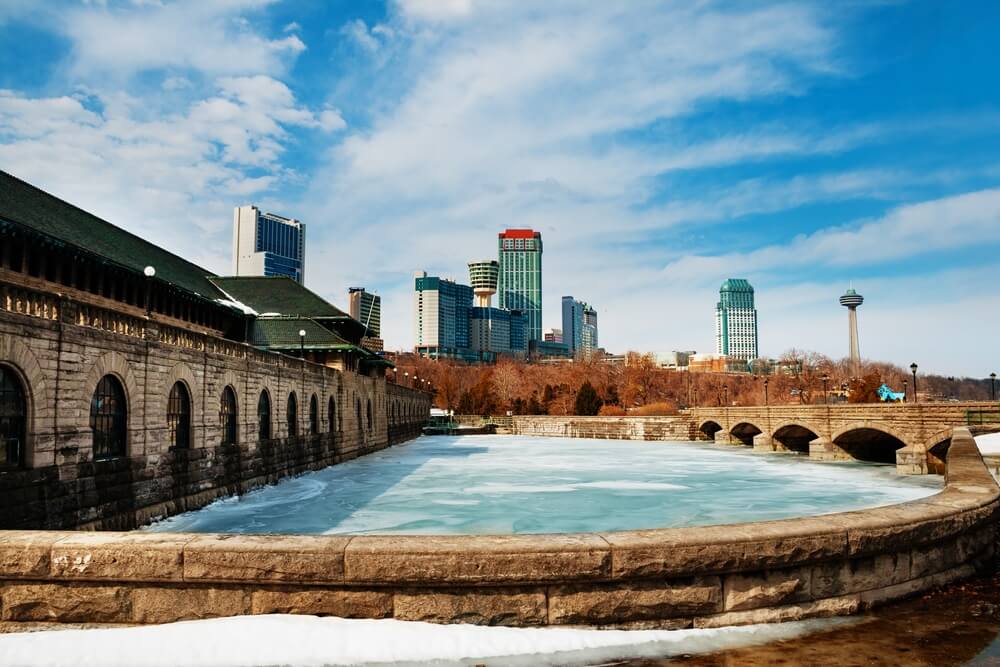 Niagara Parks Power Station is one of Niagara Falls’ famous buildings and one of the most happening tourist attractions around Niagara Falls; hence, it is also the. It was established in the year 1905 and is well known for the fascinating stories attached to it. This power station was constructed by the Canadian Niagara Power Company and is highly acclaimed for its design, engineering, and architecture.

Now, there’s a thrilling underground experience at the building that takes you 180 feet beneath the halls of the power station. As you go, you also learn about the excavation process of the tunnel, the people involved, and more. Finally, you reach the stunning new observation deck at the river’s edge. Breathtaking? Even better!

Rambler’s Rest is the oldest resting pavilion on the Niagara Parkway. It was built in the year 1907. Historically, it has been the viewing point for all the adventurous activities on Niagara Gorge. It has witnessed some audacious stunts and accidents that cost the adventurers their lives.

Today’s Rambler’s Rest is open to the public and can also be rented for weddings and other outdoor celebrations. The place offers stunning views and is a must-visit on a trip to Niagara Falls. 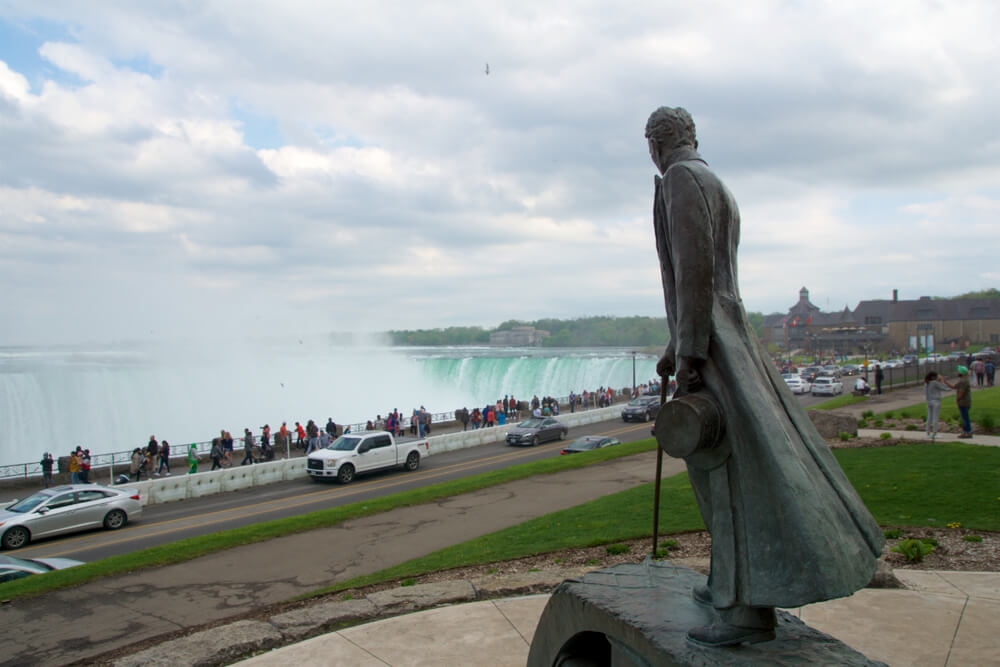 Tesla Monument is a monument of Nikola Tesla on the Niagara Falls Attractions Canadian side. It overlooks the Horseshoe Falls and is a tribute to the great scientist Nikola Tesla who designed the very first hydroelectric station of Niagara Falls.

The Tesla Monument showcases Nikola Tesla, standing on top of AC motors with his cane. The Orthodox Church of Niagara sponsored this sculpture. It is a must-visit Niagara Attraction for everyone visiting the mighty falls.

Niagara Falls Attractions are one of nature’s best-kept secrets as it has amazed and baffled tourists and scientists for centuries. The aforementioned list of famous architecture around Niagara Falls is enough to lure you to this wonderful spectacle.

How many outlets do Niagara outlets have?

There are 100+ outlets in the Niagara Outlet. The place boasts top brands such as Coach, Michael Kors, Tommy Hilfiger, Nike Factory Store, and more.

Where should I go after Niagara Falls

Niagara Falls is surrounded by some of the most stunning and historically important sports. After Niagara Falls, you can visit the Maid of the Mist, Clifton Hill, Niagara Glen Hiking Area, Niagara Botanical Gardens, and more.

What is the distance between Montreal and Niagara Falls?

The distance between Montreal and Niagara Falls is 671.1 km.

Is Boston close to Niagara Falls?

The distance between Boston and Niagara Falls is 753 km. It takes approximately 8 hours to cover the distance by car

Quebec City is most like Europe. It was founded 400 years ago and is believed to be one of the oldest European settlements in North America.