Canadian Moose: The National Symbol of the Native Wildlife 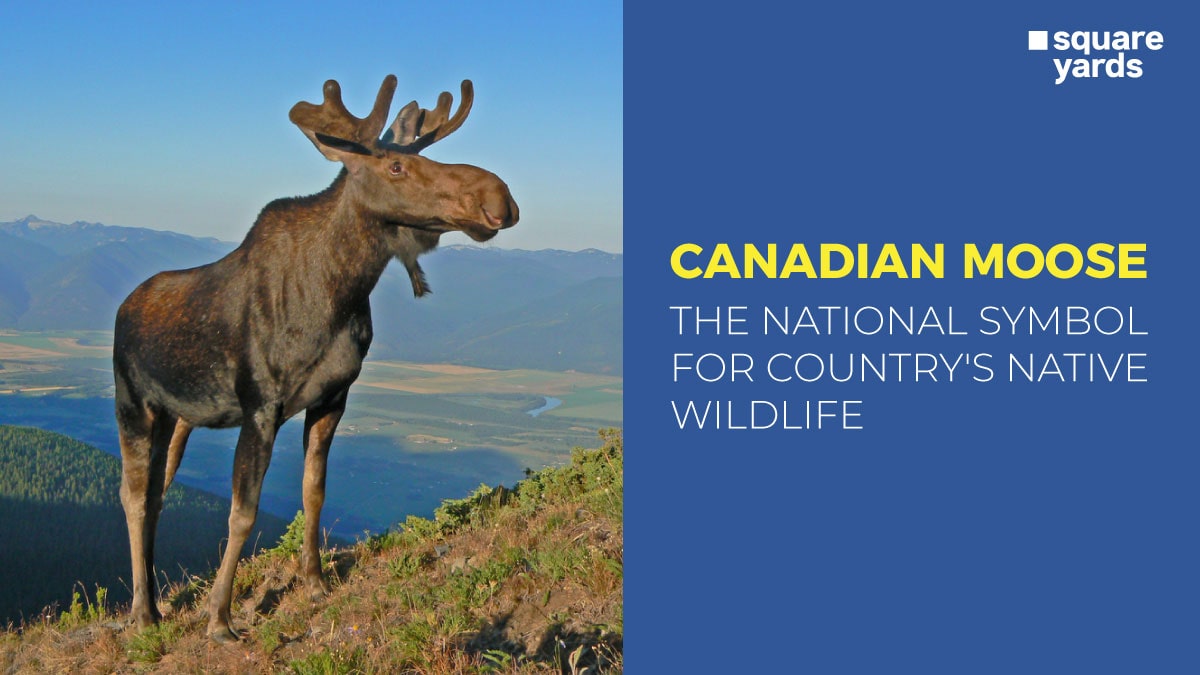 The largest known living member of the deer family or the Cervidae is the moose. The distinctive feature that differentiates it from a deer is its antlers. The Canadian moose can be bifurcated into four types of subspecies:

These creatures look regal and are found across Canadian provinces and territories except for Prince Edward Island. The moose features on Ontario’s provincial coat of arms and is considered the national symbol of Canada.

Their bodies are prone to survive better in colder regions, so they are generally found in snowy areas. They find a nearby place of water in summer times to cool down their bodies. 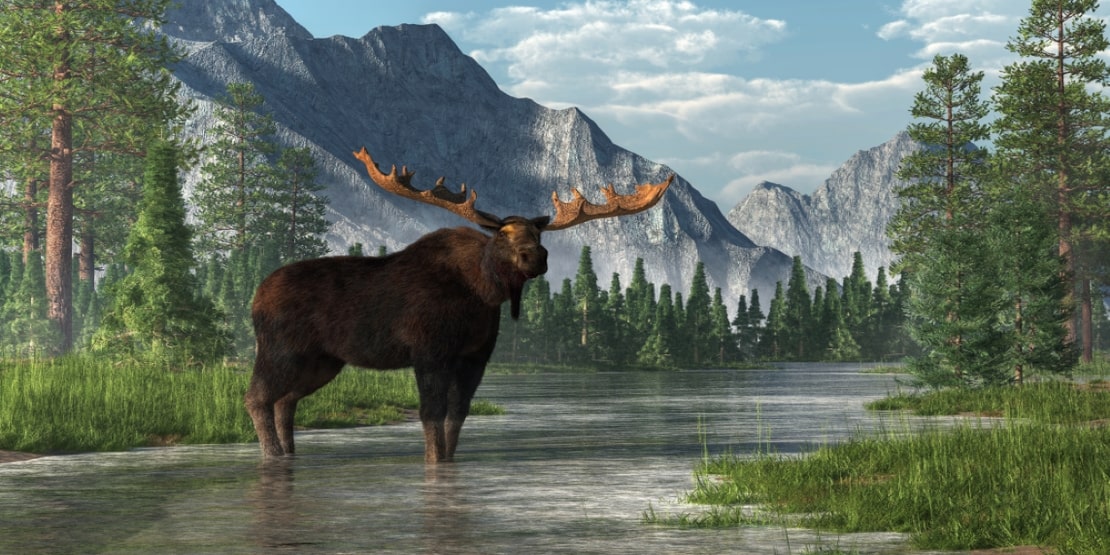 Representing native life, the moose is considered the national symbol of Canada. These animals are the largest members of the deer family and are a little taller than horses.

The word moose is derived from the Algonquin word “mooswa,” meaning twig-eater. They are herbivores and look for vegetation to fulfil their food necessities. Moose features on the coat of arms for both Ontario and Newfoundland. This is probably why it is found in a great number in Canada. Hence, the moose is a recognisable Canadian symbol.

Separating them by their gender terminology, these Canadian Moose can be divided into three categories:

A healthy Canadian moose’s typical lifespan ranges from 10 to 12 years. A young moose stays with its mother for approximately a year before it becomes self-sustainable to move across the lands by itself. It reaches the prime stage of life and fully develops around age five.

The moose population seemingly grew in the years following the 1980s, from 7000 to 10,000. There was a subsequent decline in their population due to mortality rates in winter, reduced productivity due to population increase, natural forces like predation, etc. It resulted in a drop in numbers from 10,000 to around 6000.

The known population of moose as of recent records is between 5,00,000 to 1 million, most of which are Canadian moose.

Winter landscapes are the moose’s ideal habitat, so they look for a snowy region to live in. Their bodies function the best when they are in colder areas. Moose are mostly found in Canadian forests. They start from the Alaska boundary to the eastern tip of Newfoundland and Labrador.

Moose are generally not considered aggressive animals unless aggravated by external forces like human beings, dogs and traffic. This is especially true during winter. Moose must walk through deep snow in winters, and if humans or other animal species come in their way, they are prone to become aggressive towards them.

On average, a moose’s size ranges between 4ft 7 in and 6 ft 11 in high at the shoulder. This is more than 30 centimetres higher than the largest deer, the wapiti. The female moose is smaller in size by comparison.

The male moose weighs an average of 400 kg, while the average weight of the female moose is 350 kg. 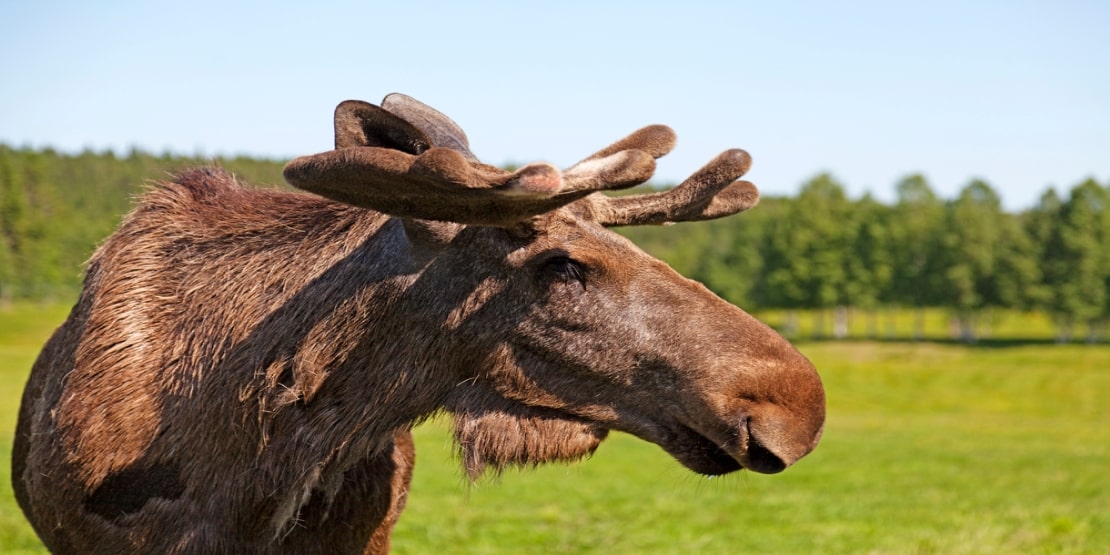 Moose antlers go through a life cycle of their own. When a bull is just a year old, his antlers begin to grow. They fully develop when the moose reaches its prime at around five years of age. The male moose antlers are nothing but an extension of their skull.

One peculiar feature about the bull is that they shed their antlers. They start growing from spring and go all the way through till September. The velvet antlers then dry and fall off. The female moose does not grow moose antlers.

Moose are herbivores and eat all day to fill their bellies. They require 10,000 calories daily and feast on twigs. Like cows, they have a four-chambered stomach.

The female moose, also known as the cow, are known to grow and mature quickly. By age five, these calves can outrun a fully grown person. Calves are born in the spring and gain almost 1 to 2 pounds daily. This later increases to 5 pounds a day.

Moose can swim up to six miles in an hour. They can dive up to 20 feet underwater and stay there for up to 30 seconds. The moose have hollow hair that helps them stay afloat in the water. 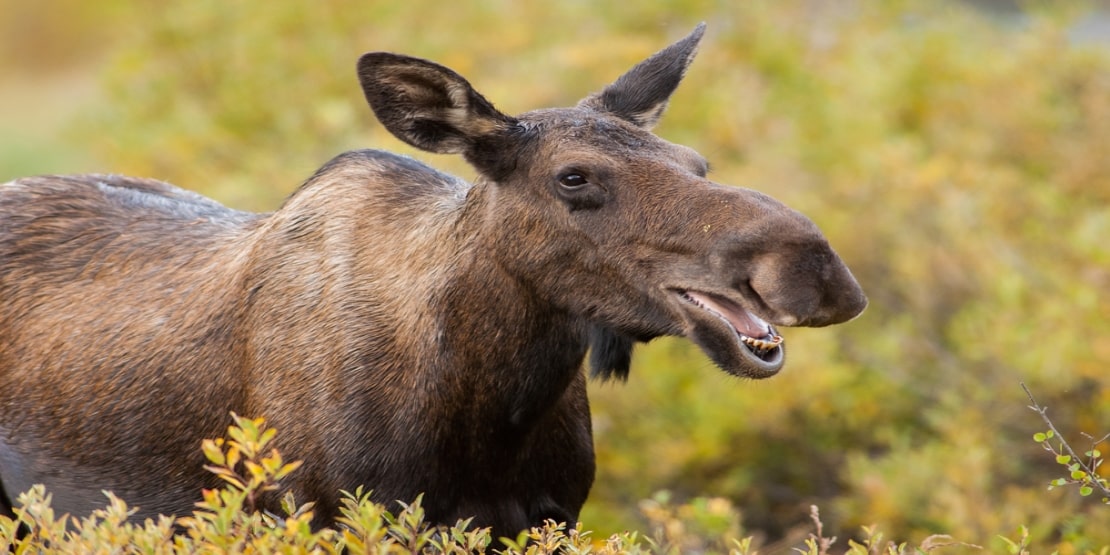 Moose are the largest deer species that prefer colder habitats. The male bull has sharp antlers, which form an extension of their skulls. You can find them in Canadian forests and as the symbol of Canada on Ontario’s provincial coat of arms. If you are visiting Canada or have just begun living there, check out these beautiful animals in Ontario’s jungles.

Where can you find the biggest moose in the world?

The Alaska moose or the Alces alces gigas is the largest subspecies of the moose known to humankind. They are found in the ranges from Alaska to western Yukon.

Has anyone ridden a moose?

What’s faster, a moose or a horse?

Moose can be substantially larger than many horse breeds, but they cannot outrun a horse. This means that technically a moose is slower than a horse.

What is the closest relative of a moose?

The Eurasian elk (Alces americanus) is the moose's closest relative. These animals are found in northern Europe and Asia.

Are elks and moose the same?

No. Elks and moose are the closest relative to each other but differ in appearance. Elks are light brown with a pale yellow rump. An elk’s snout is narrow without a bell, whereas the bull moose has a large throat with the fur under its neck. A bull moose has broad antlers, while a bull elk has pointed antlers.

« Why Should You Move to Brantford City?
Must-Visit Spots to Experience Wildlife in Canada »