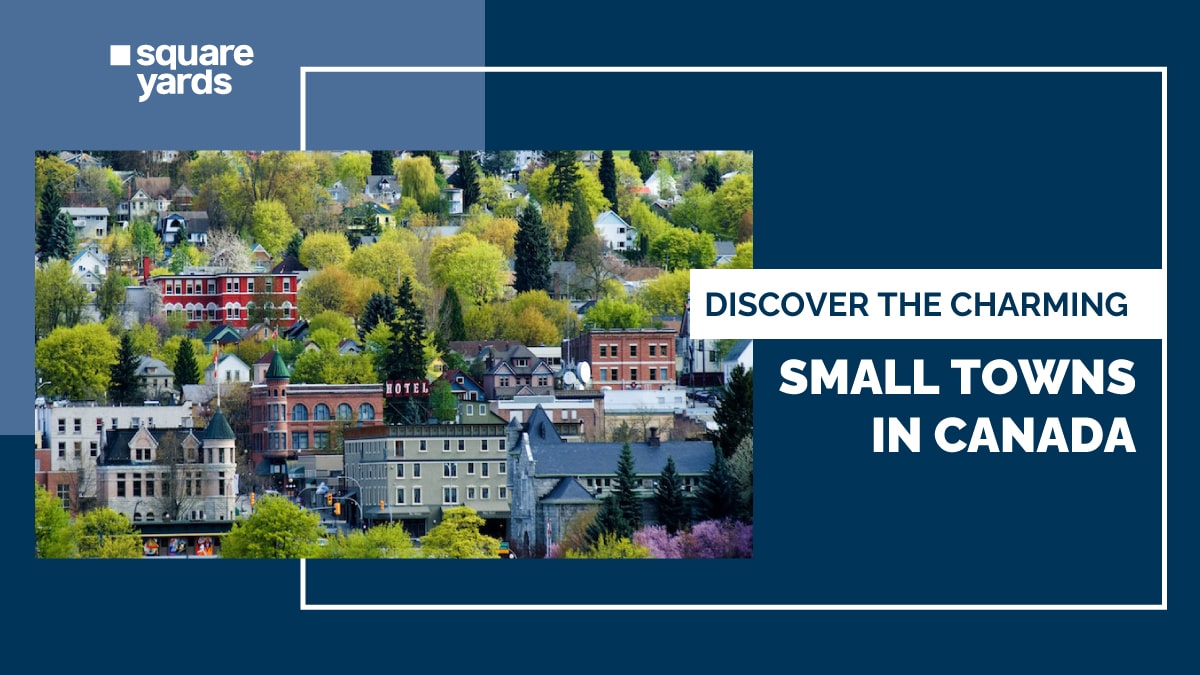 While Calgary, Toronto and Vancouver often steal the spotlight, Canada is dotted with its fair share of wonderful small towns. From charming fishing villages to atmospheric mountain towns to diverse British colonies and seaside communities, small towns in Canada are a mix of cultures and eras that encapsulate adventure, charm, and hospitality.

From coast to coast, here’s a sneak peek at some of the most charming Canadian small towns worth exploring.

Population: About 7200
Known for:  Art Galleries and Food delicacies

This picturesque small town in Canada ranks among the country’s cultural capitals, thanks to its lively art scene. It is located in Quebec’s Charlevoix region and is known for its gastronomy including cheese, fresh berries, meat, mushrooms alongside handmade chocolates. Other than its mouth-watering dishes, there are mountains, the bay itself, galleries and museums to explore.  If you had to sum up what a visit to this postcard town Baie-Saint-Paul, Quebec, is like, you might say that it tastes as good as it looks.

Population– About 1000
Known For– Polar bears

Polar bears, beluga whales and Northern Lights, Churchill draws wildlife lovers from far and wide. Located on the shores of Hudson Bay, tourists flock to this small town in Canada to catch a glimpse of the majestic white bears. Travellers often plan side adventures for seeing the Northern Lights, which are visible up to 300 nights of the year. Known as the polar bear capital of the world, there are only two ways to get to Churchill-it’s only accessible by flight or train, which adds to its remote allure.

Population– About 1400
Known For– History and Culture.

Yukon’s original capital and today a National Historic Site, Dawson City used to be a  booming small towns in Canada during the 1800s. This was due to the Klondike Gold Rush era when prospectors searched for treasures in the flowing waters. The spirit of the gold rush is still alive in Dawson City, mainly because the town’s appearance hasn’t changed much since then. A walkable town that has embraced its rich history through museums, tours including Canada’s oldest gambling hall, and fun activities like panning for gold or posing for old-timey costumed photos. The Midnight Sun also guarantees epic nightlife famous for the Sourtoe Cocktail (a shot of whiskey served with a mummified human toe floating in it) at the Downtown Hotel.

Population– About 7800
Known For– Hiking trails and summer cultural festivals

Visit the picturesque town of Elora, just a 90-minute drive from Toronto to catch a glimpse of its cascading waterfalls while hiking through the star attraction Elora Gorge Conservation Area. The town’s quaint 19th-century buildings lining its main streets house cafes, restaurants, and a collection of artisan stores. It also attracts several arts and cultural festivals Riverfest and seasonal farmers’ markets during the summer months.

Population– About 7500
Known For– Architecture, beaches and history

Founded in 1828, and named after the British prime minister then, Goderich is proud of its exquisite beauty. Its motto appears to be ‘Canada’s Prettiest Town’. It overlooks Lake Huron and more than one-quarter of the area is parkland and includes various historical attractions such as Huron Historic Gaol and the Huron County Museum.

Given the charm and character of the town, Queen Elizabeth II coined Goderich “the prettiest town in Canada”. Spend some time in the Goderich downtown that is incredibly unique as it’s formed in octagonal-shape—where there are lots of shops, restaurants and outdoor concerts and farmers’ markets in the summer. From history to beaches, parks, and unbelievable views, you don’t want to miss these small towns in Canada!

Population: About 1,100
Known for: Culture and architecture

Gravelbourg is the ‘cultural gem of Saskatchewan’. Thanks to its rich culture, remarkable Francophone heritage, regal architecture and diverse spirit,  it’s also been dubbed as the town with “a touch of Europe in the Prairies” the city is lined with stunning heritage homes and beautiful parks mesmerizing the tourists. The town’s unique quality of life offers modern recreational facilities such as boutiques and cafes, boasts museums and other educational activities, and all the amenities you may expect in a more significant urban center.

Population– About 3708
Known For– national parks and Outdoor activities

The interior of British Columbia has more than a few small, laid-back mountain towns, but Golden is immensely popular in terms of its beautiful geography: two major rivers (Columbia and Kicking Horse), three epic mountain ranges, and six national parks in the vicinity. Golden is an ideal base for exploring the Canadian Rockies. For its residents and visitors, life in this small town in BC involves making the most of the surrounding mountains – hiking them in the summer, skiing or snowboarding along the Kicking Horse River, and enjoying the stunning vistas 365 days a year.

Population– About 1036
Known For– Maritime town

Charming churches, delightful shops, and houses painted the colours of Easter eggs- that’s the picture of the perfect maritime town of Mahone Bay. Located in Nova Scotia’s Lunenburg County, Mahone Bay has the distinction of being the fastest-growing municipality in the province. Water is an important feature in the town stand-up paddle boarding and boating are just two ways to explore the bay. Along the waterfront, there are small shops featuring goods from local artisans, and cute cafes to enjoy the liveliness of this small town in Canada.

Famed for its sun-drenched vineyards and Quaint colonial buildings there’s a reason why Niagara-on-the-Lake is nicknamed ‘The Loveliest Town in Canada’. Nestled on the southern shores of Lake Ontario not far from Niagara Falls, this scenic town with a lively food scene, bed-and-breakfasts and spectacular golf courses, is a popular tourist destination in the summer months. There are plenty of ways to enjoy your day, from window shopping in the Heritage District to hopping on a cycling tour to lively downtown. Events like Shaw Festival feature modern plays and classics alike and keep the town buzzing with life.

Population– About 4600
Known For– History and recreational activities

Neepawa was first settled in 1877 and like many places in Canada, the land was in use long before Europeans arrived. The town is famous for many historic buildings to admire: the Margaret Laurence Home, where the Canadian novelist grew up, and the Neepawa’s Riverside Cemetery, which has been called the most beautiful cemetery in the world. Other than its historical importance the town offers tourist and recreational attractions such as camping, hiking & cross-country skiing trails at Rosedale Farm Trail and HyLife Back Forty Trail Park.

Canada is a land of beauty with impressive mountain ranges and the largest protected boreal forest on the planet. We hope this curated list has inspired you to visit these hidden small towns in Canada and make exploring this expansive country a real joy.

Where is the smallest town in Canada?

Victoria-by-the-Sea is officially the smallest town, with a population of 74 (though the number increases in the summer, as seasonal residents make their migration).

What is the best small town to move to?

Niagara-on-the-Lake, Ontario is a beautiful small town in canada with a lively food scene, quaint bed-and-breakfasts, and spectacular golf courses to keep you entertained all-year round.

What part of Canada has the least population?

Tilt Cove in Newfoundland and Labrador has a population of just four people!

Which is Canada's smallest province?

Prince Edward Island is the smallest province in Canada with a population of over 150,000.

What is the oldest town in Canada?